We are re-publishing AP '09 movies to AP '13. During our testing we keep encountering the white box or white boxes being added around images. These are not visible in the PPT slide show view. Only when the presentation is published.

The upper left image - EMS Star of Life - is part of the Master Slide. The white box is encountered on every slide.

The lower left image - warning exclamation point - is a graphic animated to appear on the slide, timed with the narration.

Publish is with Articulate Studio '13 trial and PPT 2010. We have encountered this issue in .PPT and .PPTX files. 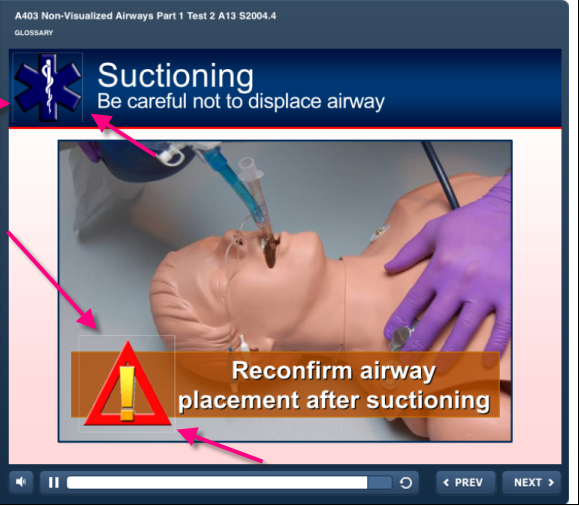 I am having a similar issue. I'm using .png images so they are transparent if that helps to discover the solution.

It hasn't happened to me yet, but I did see it in a friend's presentation yesterday.

Would you be able to package up your Presenter course and share it with our team here?

I was having a similar problem and found I had to resize the photo, crop a little smaller and that did the trick.

Thanks David for sharing that here

We received the support engineer reply that the solution for this problem is to:

"As for the white boxes around transparent images, I was able to workaround

This is an unacceptable workaround. We are republishing hundreds of courses with 1000s of images that would need to be each clicked, saved as and inserted again.

We are looking for a solution that scales to the level of content we hope to republish with Articulate '13.

I looked for you case, and didn't find one - are you able to share your case number with me here? Also, if you would share that information by replying to Support@articulate.com from the email the Support team can continue to work with you.

I've managed to republish 4 of my old presentations so far without having this problem. And now suddenly, on my 5th refurb, almost all of the graphics have the phantom border problem. The outlines only appear on iPad output.

I haven't heard back from Greg yet to look into his case, but was your republish after following the steps that Greg shared from his case to:

"As for the white boxes around transparent images, I was able to workaround

I'm working with about 50 presentations, each with 20-30 slides. The images span multiple slides with movement and rotations. I'm guessing that fixing it this way will take me 10-20 hours. It's just not a practical solution at all.

Ok, I think I've figured out what causes the white boxes to appear. A new "feature" since '09 it seems.

Unfortunately, there is no quick way to get rid of the outlines on existing graphics. Replacing them is the only solution that I'm aware of.

I think this same problem may occur if you use Insert>Clipart in PowerPoint. Testing that now.

Turns out that the Set Transparent Color is only part of the problem. Converting such an image to a .png with the background removed in Photoshop fixed it in one presentation, but when that same image was used in a different presentation, the white outlines are back.

Making progress now. The presentations that have the white outlines come from old versions of PP. I had just been saving as the default (97-2003 Presentation). No problem in Flash, but apparently it does affect iPad output. I resaved as "PowerPoint Presentation" in PP 2010 and republished. 90% of the objects that had the outlines were now fixed. Oddly, a couple of graphics still have the outline, but I'll work on that.

So, if you're having these outline problems in your HTML5 output, make sure you are saving using current PowerPoint options. If you're using an older (I don't know how old) you may need to upgrade to PP2010. A heck of a lot easier than saving and replacing countless images.

Thanks for sharing that additional information here. I still don't see Greg's case and haven't heard back from him so I can't add this information to his case. If you'd like to share one of your Presenter courses (create a Presenter package following these directions) that is experiencing the problem with our Support team and provide this information as well, they can try to do some further testing based on the PPT version.