I have a nightmare issue with Quizmaker. I have several simple quizzes made in Quimaker 2.3, deployed in Moodle 1.9+ (build 20080409) with all subsequent patches applied. 80 users are using the quizes and some of them have issues that I can't reproduce. I tried everything: closed browser in the middle of the quiz and then finished it later, finished the quiz and closed the browser without clicking the Finish button etc... but never sucseeded to reproduce the problem my self. Unfortunately, users are unable to explain what exact steps they did when the problem occured. None of them can easily reproduce the problem at will because it seems to happen randomly.

Here's what I have concluded so far:

Some users in certain (unknown) situation get score reported to the LMS but lesson status is not reported or is reported as incomplete instead of passed. LMS reports are based on score and lesson status so reports are showing that user has enough score to pass the test but the status is unknown or incomplete. Quizes are set to report score, to report passed/failed status and minimum 70% of score is required to pass the test.

I analyzed what is reported to the LMS's database in case when issue occured and made a query that returns all SCORM cmi.core.* records from tracking database in single user attempt in single sco. In technical terms of SCORM, cmi.core.score.raw is reported but cmi.core.lesson_status sometimes is, sometimes isn't and sometime is incomplete instead of passed. Here are some records from the LMS database where you can see the issue: 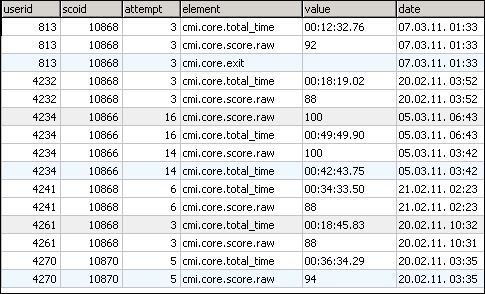 Hi Zoran and welcome to Heroes,

If you are experiencing issues with content in your LMS, please refer to the following Word of Mouth blog entry, which outlines common issues pertaining to viewing and tracking content in an LMS:

If you continue to have issues, please submit a support case to us by using the link below: