I have the same problem but I have juste one layer, so I can't put a Triggers Hide layer this layer

I started my project with Try mode and I changed a lot of things (caption, Triggers, options).

From your image it looks like the caption is on the base layer? What about using a change state trigger to change the state of the caption to hidden when the user hovers over the hotspot or clicks on it?

I can try to create a new state, but it's not necessary to hide caption because I want the caption stay until the user clic on the Hotspot.

Do you have a other solution for me ? 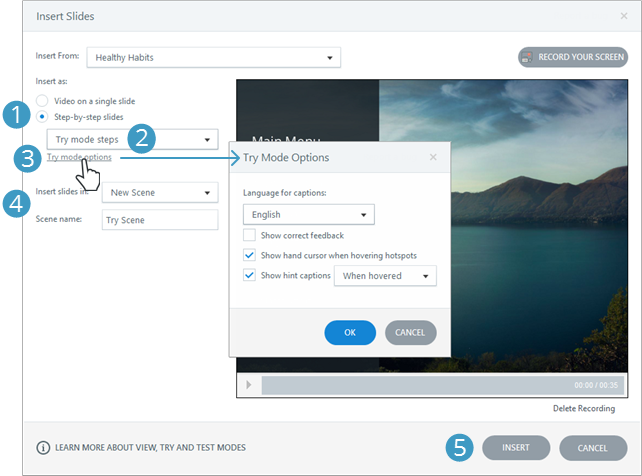 You can insert the screen recording again to change the behavior.

It's not easy for me to explain in english lol !

I make a record of my screen and I changed a lot of things like triggers and caption.

Currently, when I cheek my demo I have a problem with the captions. It hidden when the timeline ends.

I hope you understand :)

Looking at your image again - it's not set to be shown always? If you right click on the caption object within the timeline you can change that property.

This solution change nothing :-(

I put my file as an attachment.

The problem is in the second scene.

Thanks for sharing that file here. It looks like it's only the first slide in the second scene, correct and you've inserted this in view mode? Within view mode, there isn't an option to change the caption behavior or callouts - but most of your other slides are set to jump to the next slide when the timeline ends, not when the user clicks as in that first slide? Would changing that trigger solve the problem you're experiencing? As than the image would stay on the slide through the timeline's end, and then the user would be brought to the next slide.

If's I can chage de behavior or callout form a view mode, it's possible for me to change de view mode for normal slide ?

It's is possible to "chat" with you in real time ?

Unfortunately I don't have the ability to chat in real time. If you'd prefer, you could connect with our Support engineers and if you have a Platinum membership plan they can offer live support.

In regards to the trigger you mentioned, in view mode - the user is not prompted to enter in the information, but you'd see that type of trigger in try it or test mode of a screen recording. You could also create your own trigger on a text entry to jump to the next slide when the text entry loses focus (meaning the user clicks outside the text entry or uses the enter key to submit it) and the value is equal to X.

I'm not sure what you mean in regards to changing it from view mode to a normal slide - if you just wanted to have the screen shot elements and no interactivity you could recreate that manually, but there isn't an option to remove the interactivity or the mouse movements.