I'm having issues with the font. The character spacing seems odd to me in storyline 2

When using font Calibri some of the letters are joined together .

For example In word "Amortization" the letters ''t " and "i" are joined.

Similarly in word "flash" the letters "f" and "l" are joined as shown below: 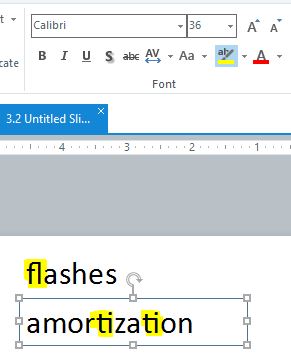 I tried to increase the character spacing by 0.1 but the text expands too much and doesn't look good. As shown below:

Is anyone else having similar issues. Is there a solution for it?

Thank you for sharing this. I was also able to recreate this in a new file in publish as well. I will be sharing this with our QA team for review. I did see that if you change one of the letter to a smaller font, 1 or .5 pt, it shows correctly. Not sure if this would work, but it is a work around for now. I will post here with any updates.

I have tried making changes suggested in the sample text but it still looks out of place. Moreover I have a large amount of text in Calibri and making changes in these characters will be a tedious job which perhaps will not be acceptable to the client..

I would rather wait for a fix in the coming update of Storyline 2.

I will post here if there are any updates from our QA team.

Glad, I found this.  I too am having issues with SL2 with Update 5, using the Century Gothic font.  I'll attach a picture of what I'm seeing on my machine but not on my coworkers.  The word "Services", when it is in boldface it looks perfect, but when it is non-boldface the 'i' hugs the 'c' and is too far to the right.  I've read that the computer's DPI setting should be 96 and mine was already set for it.  I also read that this happens to Arial, but I'm using Century Gothic.  I created a support ticket and hopefully there will be a resolution for this.

Thanks for letting us know that you reached out to our support team (00566190) and it looks like Robert is assisting you :)

Aman, what you are seeing is actually the proper typography. These connected letters are called ligatures and they are part of the font set created by the designer and finally available to Windows users broadly (they have been part of the Mac font sets for years). Common ligatures include fi, fl, ff, ffl,ffi, ft, tt, ti, and others.

Typeface designers create these special ligatures so parts of letters don't collide with each other, for example the dot of the "i" could overlap or collide with the overhang or cross stroke of the letter "f". So the good type designers create special ligature that are automatically inserted whenever the user types the letter combinations that make up the ligature. (This generally requires OpenType fonts for Windows and an application that fully supports OpenType fonts.)

SL2 now has the ability to swap out those potentially colliding letter forms with proper ligatures, and that is what you are seeing. I think Arlyn did a nice Screenr showing how ligatures are swapped out using the Segoe Script font.

The other spacing issues Kelly is speaking of are different issues altogether.

Here is an example that probably illustrates what I'm saying above about elements colliding:

Sorry, forgot to mention that in one of the posts, it was Arial with 14 point that the spacing did not look correct.  The work around was to go above or below 14 point.  My screen shot was to show that going above and below Century Gothic 14 point did not make a difference.  The only thing that did work was to make it bold face, but of course that is not reasonable for a course.

Thanks for sharing your update Kelly.

I just noticed that Update 6 is out but the only release notes are HTML5 support for Chrome.  Is there anything else that Update 6 fixes?

In case this is the issue, here's the video Brett referenced, on how Storyline handles typographical ligatures for fonts that support it - https://fast.wistia.net/embed/iframe/x1rpcle4d7?popover=true

If it's truly font spacing, you can actually customize spacing between just two or three letters if needed, you have very granular control - https://fast.wistia.net/embed/iframe/3k81heud2p?popover=true

Hi Kelly! The only update was for the Chrome 44 issue as mentioned in the documentation. It was more of an emergency release.

Thanks for sharing Brian.