I am trying to create a slide in Storyline that functions similar to the Process Diagram slide in Articulate Engage. In Articulate, the button that is currently being viewed has a different color state than the normal buttons.

In the slide I'm creating I have my numbered buttons created which triggers a layer to appear on the right side of the slide with the BASE content that still appears on the left.  I want the students to know which button they are currently viewing by making it darker than the normal state since they can click them in any order, just like Engage.  I also have already set the Visited state buttons with a grayed out look.

My dilemma is I cannot make this work. I originally tried to use the Selected state to show the currently layer, but that does not work in the way I thought it would. When using the Selected state in Preview mode, the button changed to the darkened color I selected, but when I went to the next button in the list, the previous button still remained in the darkened state rather than showing the Visited grayed out state. If I returned to the button a 2nd time, then it would go to the Visited state-- basically it toggled back and forth from Visited to Selected.

After discussing this with a co-worker, he said he thought the Selected state was more for things like quiz-type buttons where it would show the buttons the students selected before clicking Submit and was not really meant to do what I was trying to accomplish.

Is there a State that simply shows what the current selected item is?

If you select all of the buttons at the same time, and right click you can create a button set.  This will make the selected state toggle between all the buttons the way that you want. 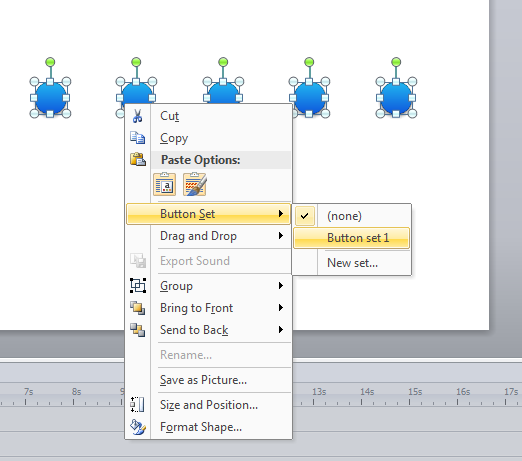 Here is some more information on adding button sets. If you need any help, let me know.

I'll give the button set a try!