Drag and Drop with Branching

I have a drop and drop activity with five drag items and five drag targets. After each drag item is dragged over the drag target, I have programmed the next slide to play the screen recording on from another scene to play. After the screen recording plays, it is supposed to resume the drag and drop activity to show items that have already been dragged over and completed but the activity starts over. Using states did not work for me. Same result. Layers seem to work but can I add an entire scene of screen recording as a layer? Any other ideas aside from using layers? Thanks!

are you using the 'pause timeline on base layer' when the screen recording layer plays? 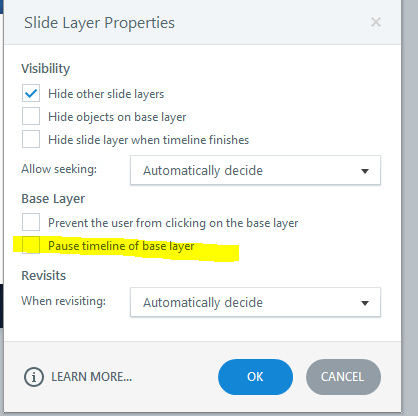 No. Could you send me a tutorial how to do that? Thanks.

Also, when you respond to a post via email it puts all your personal email signature on the post - you can come in and edit that out if you need to.

Thanks Wendy. Do you know if I can add a screen recording (a series of slides) as a layer? Right now I an branching to a different scene. I am trying the same concept and adding a pause timeline trigger when it branches out. Do I need a resume timeline for that to work? If yes what would that trigger conditions look like? Resume when? Thanks!

Hi Melody - sorry I misunderstood and thought your screen recording was a one slide video.

How many times will the user be leaving the D&D slide to go to this recording slide? Once, or more than once?

Perhaps it would be easier for someone to help if you could upload the story file and put a story about which slides you want to go where / when.  When we can see your setup it's easier to recommend a way to achieve what you want.

I've attached a mock-up of the project. Scenes 2-6 are unique screen recordings. My problem is that when I go back to D&D 1.2, it doesn't show me the next envelope/object to drop so I can proceed. Thanks a lot.