In creating an interactive problem for a finance course, I'm having trouble getting appropriate feedback displayed when several numbers are entered on one Storyline screen. In the simplified example attached, if the learner did what they are supposed to and put numbers in every box before submitting, things would work fine. However, we know we can't always count on that. So, I created a layer that appears if every box hasn't been filled in and that seems to work as it should. What doesn't work is that if the first time or two numbers are entered, all boxes are not filled in, the layer can be closed so one can continue. So far so good, but once all the boxes are filled in, if it isn't with the correct numbers, the Try Again feedback layer does not display. Instead, the Incorrect layer displays telling the learner to continue. Sometimes, some of the numbers from previous tries when all numbers were not entered can not be overwritten to try putting different numbers in. Any help will be appreciated - I've tried creating a variable to count how many times the learner has entered something in all the boxes and then tying it to conditions but that doesn't seem to help. 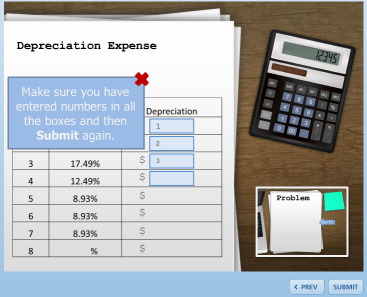 Try removing the triggers for the Text Entry interaction

Thanks so much for taking a look at this Ole. It would be great to have a solution that is easier than the original. Removing the text entry interaction triggers fixes the problem of not getting the Try Again layer but now I can't get past the Try Again layer to the Incorrect layer to be able to continue on with the interaction.

This gives me something else to work with and it seems I'm closer to a solution.

I have attached a version where a continue button is shown on the try again layer if you have tried 3 times.

I have only made changes on the try again layer

I hope it helps you in the right direction

Have you seen this thread?

I got the chance to look at the project. I do have a quick clarification.

Did you want to limit the number of attempts in aswering the problem? (If the case is unlimited, then I suggest taking out the Incorrect Layer altogether)

Also, here's the revised version of your project.

I also set the slide properties to reset to initial state and had the "Try Again" button jump to slide instead of hide layer.

(See if this works for you)

Thanks to you both for your help. It always amazes me how many different ways there are to approach a challenge like this. Ole, I ended up modifying the Try Again button you started for me so that the continue text could be different depending on whether they were finished with their tries and ready to continue or not. Thanks for getting me on the right track.

Donna, thanks for sharing the thread which as you know has lots of good information about this kind of problem in general and several different variations on the theme.

I hope I'll be able to pay forward your helpfulness sometime,