I've read various posts about preventing the font size from automatically changing, based on the quantity of text.  As suggested, I've selected the Text Box options on the Format Shape and selected Do Not Auto Fit.  However, the font size continues to change to fit in the box.  Any suggestions?

I've attached a simple example.  You will be able to see the font through the "Toggle CC" button, which is done through the Master slide.

I see what you're describing, and changing the overall size of the text box allowed the text to fit better and be readable and I used the "do not autofit" setting - as the resize shape to fit text which would make sense when there is more text, will resize to fit the variable reference first and then squish the text in trying to keep a standard size across slides.

Ashley - Thank you for the response and suggestion.  Since it is for closed captioning purposes, what I would like is for the text box and font size to remain a consistent size.  If the amount of text will be to much to show, then what ever exceeds the size of the box will not be displayed.  This will let me know where I need to break the text up into smaller chunks.

Since this may not get fixed any time soon, my suggestion is to open a Notepad window and resize it to be roughly the width of a known line of text that fills up your CC text box. Then paste your text in there (with word wrap enabled in Notepad), and use those line breaks as a frame of reference for chunking out your variable triggers.

Chad is correct in regards to how the text box is behaving, and I believe this is currently by design, as the text box won't resize for each individual slide or element throughout. I like the work around of checking the line of text within a tool such as Notepad so that you can prepare for the individual elements to appear on screen. You'll also want to take into account how long they appear for, as based on the initial timings on your slide, some of it was a bit fast for me to read.

Thank you both for your responses.

Steve, I've found something of a workaround for this issue.

I needed some sort of transcript text box that either slides up from the footer, or slides out from the side - a transcript, To make this easier to maintain and reuse, I can put a variable reference in a text box that can scroll if need be. The variable can be set when each slide timeline starts. I put the text box in a scrolling panel to accommodate variable heights in the text box field.

Transcripts will never be the same size, most likely, in number of characters or number of lines. Normally, Articulate text boxes will shrink/expand text, but you can turn this auto-resizing off. HOWEVER, if you try to put a variable reference into a text box, the auto-sizing gets turned back on, no matter if you have the auto-sizing turned on or off!

I did find a way around this, however. It turns out that Storyline text boxes will accept HTML markup to a limited extent. So what I did for testing is to make a variable (“transcript”), and make three buttons set the variable’s value. I made each button set the variable so that they all had 10 lines; I made sure there were always 10 lines by using “<br>” to force newlines. Ergo, the text boxes always stayed the same size, and the variable reference value never resizes the text box, and the fonts never resizes.

This does mean that there will need to be formatting for all transcript values, which kind of stinks. But that’s better than building a new layer of transcript for every slide.

So the takeaway from this is that you can use a variable reference in a text box, and it will never resize so long as the height of the text box never changes.

Thanks for sharing that information here - and it's correct that Storyline' variable references won't update the text box dynamically so you'll want to size it as needed.

Ashley, I did a little editing to the above. Sorry about any attitude. Just the usual square peg/round hole stuff.

No worries Mark - and thanks for the update! :)

Hi, I'm having the some issue.

wanted to know if I can set a size to a text box so I can be sure my variable text fits in.

I tried to do this with the simple format but only the width changed. the height stayed one line.

The text box which holds a variable reference won't update it's overall size dynamically based on the text included in the reference, so you'll want to set the text box to accommodate the largest amount of text you expect and automatically any text outside that will shrink to fit.

thanks for your answer, this is what I'm looking for.

my question is how I set the size of the text box?

I found only a way to change the width not the height.

The options for formatting a text boxes overall size and formats are listed here. That's where you'll want to look at modifying the text boxes to fit the overall size of your possible text.

I'm sorry, I know where to change the size, but it doesn't let me set the height, only width.

am I missing something?

The height may be driven by what you've selected in terms of autofit properties. Did you check into the text box formatting? 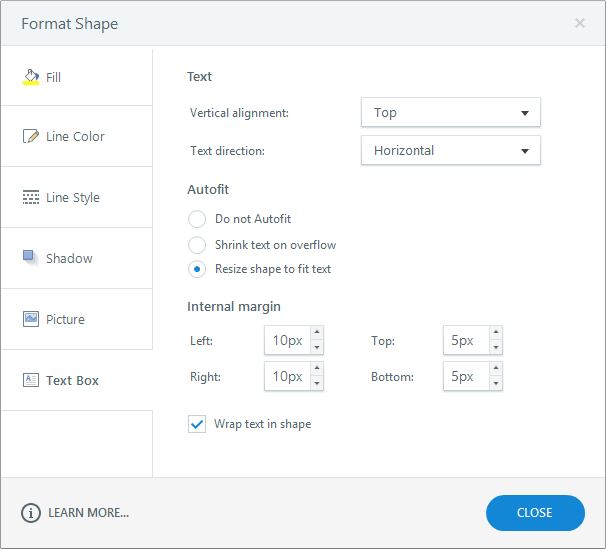 I'd look at not allowing it to shrink text or resize shape. Also the size and position window as described in the previous link would also allow you to adjust the shapes height/width.

I know the is a relatively old thread but the following may be helpful.  Adding the variable text to a shape rather than a text box and switching off the auto resize option seems to keep the text the same size.  You can then set the fill and border to 'none'.

Thanks Nigel for sharing that here and glad you were able to figure out a nice easy workaround.

I was so happy to see that you found a work around for the autofit, but sadly have not been able to make this work for myself.

I have tried adding the variable text to a shape, and even a button, and turning off the resize option, but it still autofits. Would you be able to post a small sample so I can figure out what I'm doing wrong?

Thanks so much for sharing that there is a simple solution!

Hi Karen, will post an example when I get a few minutes to do so.  From memory I think I also zeroed all of the text box internal margins in the shape.  Perhaps try that first to see if it makes any difference?

Thanks, I know it's asking a lot to request an example, sorry!

I tried zeroing out all the margins and still no joy. Maybe it would be easier for me to post my file to see if someone can see what I'm doing wrong? I'll attach my test, in case anyone is interested.

Hopefully Nigel will be able to assist you here.

I'm not sure if you noticed Ashley's response above, but what you're seeing is expected behavior.

You would want to adjust your text box accordingly. Your file is attached.

What behavior are you seeing?  I changed the text size in your example and it remained consistent throughout each state of the closed caption box. Is it changing between states when you view it?

When I view it the text autofits for each  state. I wonder what's different. Thanks for checking it out.

I have the same problem as Steve using 360. This is 4 years later, it must be a solution? Anyone?

(We have no problem doing this in our own tool but for this customer we have to use storyline.)

I know i can use Notes but i don´t like the design f that. My solution now is to make the textbox bigger and that does not look good when the text is short.

Hello Josefin - This thread is a bit dated. Do you have a .story file we could take a look at? Even a sample slide would be helpful.