Hello!  I'm trying to build a menu that sits mostly off the page (left) until user hovers over the corner - then it reveals itself (essentially moves right, on to the page).  When I preview and hover, and then move my mouse off of the item, the menu item remains in its "hovered" state" (it stays on the page).  I have "restore on mouse leave" checked.

Hi Jessy! This is actually an issue that has been reported to our QA Team. I will add this thread for awareness and to update when applicable.

Has there been any movement on this issue? We've just encountered the same issue where the slide, after a hotspot has been hovered over, doesn't return to the previous layer but restarts the slide on the Base Layer. The "restore on mouse leave" seems not to work in this case.

It looks like this was addressed in Storyline 2 Update 5, so be sure that you are on the latest update.

Hi, on update 5.1505.515 and also having problem where objects don't reset when the mouse leaves (v. simple aim: rectangle goes hidden when mouse moves over then reappears when mouse leaves). Any fixes?

I tested this and it seems to work. Can you share a bit more information or your .story file for us to take a look at?

I just installed update 7 and I am having this issue. Any resolution?

Thank you for sharing the file. Can you share the issue that you are having?

I did not see a special way to designate the Hover State on your buttons, so I changed the color to test and it appears to be working.

Thanks Jessica! I see it on your layers of slide 1.2 now as I was previously looking at the buttons. Thanks for the details and I am able to see the issue you are reporting. I will share this with our QA Team as well. In the meantime, you may need to use a 'click' trigger as opposed to hover unless others in the community have ideas for your design.

I also wanted to mention that replying to the forums via e-mail attaches your signature, but you are welcome to pop in and edit if needed.

Thank you for taking a look, I appreciate it.

I'm having the same issue. Shapes not returning to original position after moving off hover. It's a simple straight line motion path. I believe I have the latest version after my IT dept updated from the last announcement. I was given a work around by Articulate which I appreciate. But to keep things simple, I like just checking a box to get the motion path to reverse after leaving hover.

I see that you were working with Miker in your case (# 00669819) , and he offered a workaround as you mentioned - but if you need additional assistance from Miker on this issue you are welcome to respond to his last email message from Oct 22. If you need it resent, please let me know and I'll have it sent along to you again.

Hello.. I'm having this same trouble. I updated to latest version yesterday. Note in the attached project that I'v arranged to have three objects change state to Hidden on mouse-hover-over the Diagnostic Quizzes menu button (a text box is also displayed in their place). I selected "Restore on mouse leave" but the objects remain hidden.

Thanks for sharing your file - and although you're using the hover trigger, I do think there is an easier way to do this. Since you're choosing to show a layer where those items are being "hidden" why not look at hiding them on the layer itself using the "eye" icon in the timeline. Then you can remove the triggers and it all behaves as expected.

Brilliant. Perfect. And in any case, far more efficient to accomplish the task.

No problem Greg - Storyline can really do a lot of things in a number of different ways - so I tend to stick with what is built in, as it's easiest for me. :)

I'm using Storyline 360 and having trouble with Restore on Mouse Leave. I've uploaded the partially-implemented interaction (just enough to show the problem). 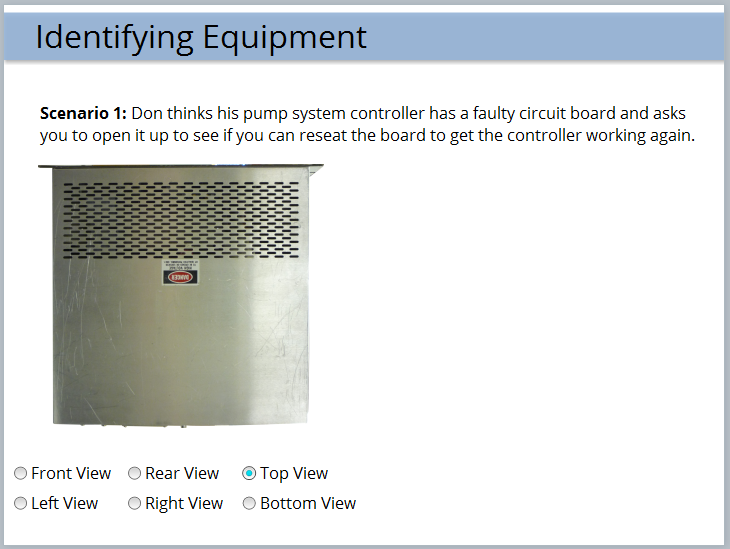 You can use the radio buttons below the device to view it from any side. Eventually, on the right side of the screen there will be a set of questions about the device that the learner will have to answer, but I haven't implemented those yet.

Due to limited screen real estate, I had to shrink the images of the device down pretty small, making most of the writing and labels too small to read. So I'm trying to implement a feature where, if the learner hovers over the device, a panel containing closeups of all the labels associated with the current view appears on the right (over the questions when I finally get them implemented): 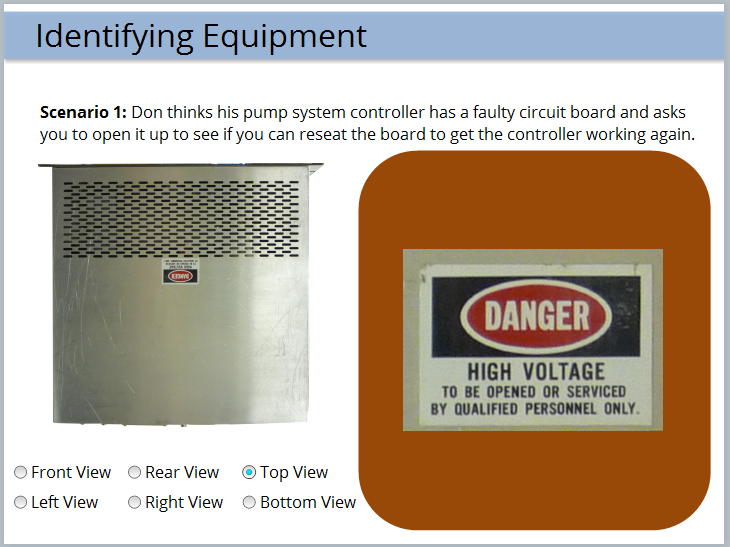 The radio buttons work to change the view, and the hover works to bring up the "closeup" panel, but when I move the mouse pointer off the device, the closeup panel does not restore to its initial state, even though I have marked the Restore on Mouse Leave for all associated triggers.

Am I doing something wrong, or is this still a known Storyline bug?

I've attached a *.story file that demonstrates the problem.

not sure if this helps, but I find this type of interaction can be fickle in SL so I use layers instead.

I have placed your 'closeup's' on their own layer, then set a trigger to show layer when a specific radio button is selected and the user hovers mouse over the device.

Thanks very much for your workaround! I would never have guessed that Restore on Mouse Leave would be able to hide a layer--I assumed (incorrectly) that it would only be able to restore a button state.

I will push ahead using your clever approach. Thank you!

Is there a place to report a bug, though, because I feel like Restore on Mouse Leave should have worked in my original implementation. I think it is a bug in Storyline that should be fixed. But where can I report a bug?

glad the workaround will work for you.

I've seen that happen before when the area that displays on mouseover sometimes overlaps too big an area...I just find layers much easier than worrying about if it will work 100% of the time for users.

I would submit a case and list that you think it's a bug.

Thanks Ray for sending in the information to our Support Engineers. It looks like they were able to confirm it as a possible software bug, and we'll be discussing with our team.

We'll keep you posted here and as a part of your support case. Sorry if this issue is slowing you down!

Most of the slow-down occurs during the "why isn't this working?" phase, which I'm already past thanks to the help from this forum. At this point, I have a work-around from Wendy that will let me proceed. I mainly just want to see the bug fixed so that I don't hit it in the future.

Aw, that's even worse Ray! Again, really sorry - and I'll keep you posted here once we've got some additional information.