I am wondering if there is a matrix or list available, similar to others that Articulate has published (i.e. Comparing Storyline's Flash, HTML5, and Articulate Mobile Player Output, or, How PowerPoint animations and slide transitions are imported into Storyline)  that would detail the "inheritance" specifics of objects, variables, layers, slide triggers, object triggers, etc......  for Slide Master ----> Slide Layout and Feedback Master -----> Feedback Layout.

I would like to create a Slide Master with accompanying Slide Layouts to capture the preferred navigation features for a series of Storyline learning modules.  I want to be able to apply the identical navigation and functionality across multiple modules with the least amount of copying and pasting into individual slides.

Let me give you an example:  In a new Slide Master, I have created variables, Slide Triggers related to those variables and a custom button set.  The variables are inherited by all of the layouts associated with the

Slide Master to which they were added.  The Slide Triggers are NOT inherited - at least they don't show up in the right hand column under "Triggers".

The custom button set, added to the Slide Master, is inherited by all of the layouts associated with the Slide Master to which it was added, however, the Object Triggers are NOT inherited.  And since they were added on the Master Slide (not one of the associated layouts), they cannot be selected for object triggers on the layout slides.

I also created a new layer on the Master Slide that I would like functionality to carry through the entire Master and accompanying layouts.  This layer is NOT inherited by the layouts, and therefore, the triggers were not inherited either.

I have located a number of tutorials that address the various issues, but would love to have a single reference page (similar to those referenced above) that would show the inheritance hierarchy.

A little more explanation of the above request.....

See below a clip from http://community.articulate.com/tutorials/products/using-slide-masters.aspx#

Below the illustration "Layouts inherit all the properties of their slide master".  I have found it difficult to define "properties" in this sentence.  I know that similar to PowerPoint, you can apply fonts, colors, backgrounds, etc... that will roll out from the Slide Master to to the layouts, but what about Storyline layers, layer triggers, player triggers or slide triggers?

A slide master in Storyline is actually a collection of slide layouts.  The slide master thumbnail in the left navigation pane will appear slightly larger than all of the thumbnails of the layouts below it. 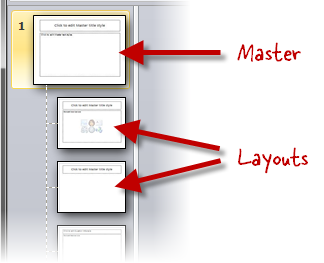 I'm currently trying to get something done where I will have to reuse several (!!) triggers. Putting those triggers on master slides/layouts is the only workable solution; some of them work, some 50% (Flash works, HTML5 fails, or vice-versa) some won't work at all.

Each time I change the mechanics and/or trigger location I run into a new set of issues...glitches and bugs rather. Although I am blessed with solid analytical and troubleshooting skills....many of these problems just defy all (my) logic!

I think you're referring to this section of that post:

If you've added triggers to the slide master or feedback master in your Storyline project, you may find that they don't work as expected in HTML5 output. Please review the following article for more information:
http://www.articulate.com/support/kb_article.php?product=st1&id=fibfs9o74qsh

Although, I'm not sure I'm following the rest of your posts, if there is something else we could help you with please let us know.

I have seen the article you are referring to:

However, I have read through the entire knowledge base you are linking to, but haven't found any further information on the issue.

Since the problems occur so inconsistently it's hard to ask for help on one specific issue; Rather, I would be grateful if someone could shed some light on the slide master/trigger issues in general, and provide more details as to why these occur in the first place.

Simply not using triggers on slide masters when using html5 takes away some real benefits of these integrated functions in SL. (especially when building game-like projects)

Sorry for the delay, I was out of the office last week. The use of triggers on the slide master and their use in HTML5 is something that our team is aware of, but I don't have any information about any changes to that behavior. I'd suggest if you'd like to share your thoughts on why this feature is crucial for your course development to submit a feature request.

Back to my original question:  this was not in regard to HTML5 content, but content in general, even for PC consumption.

Janet, did you ever get a response that answered your question? I have the same question/problem. Thank you.

This thread is a bit older now, and I'm not certain Janet is still subscribed - but could you tell us a bit more about what specific question/issue you've run into? The slide master can have triggers included on it, and they should work as expected on a PC - but if you've run into a particular problem we're happy to take a look.