New Version on Storyline 360 is Unstable

It's awful that you force users to install a newer version when it's unstable.  This is affecting my productivity and I'm under immense deadlines right now.

I feel your pain. I went back to a previous version, March 3, 2020. I'm having better luck there. See the attached image.

I see how you did that!  Thanks for the tip!

Your welcome! You do not need to update. In fact, I often do not update when I'm up against a deadline.

Thanks for contacting us to share the difficulty you've experienced in the last couple of updates.

How can you install a previous version?

You can install a previous version of Storyline 360 with the following steps:

In addition, I wanted to address the other items you mentioned:

Is installing an update necessary?

While we certainly advise staying up-to-date to take advantage of the latest features and fixes, you can still open and use the software without updating: 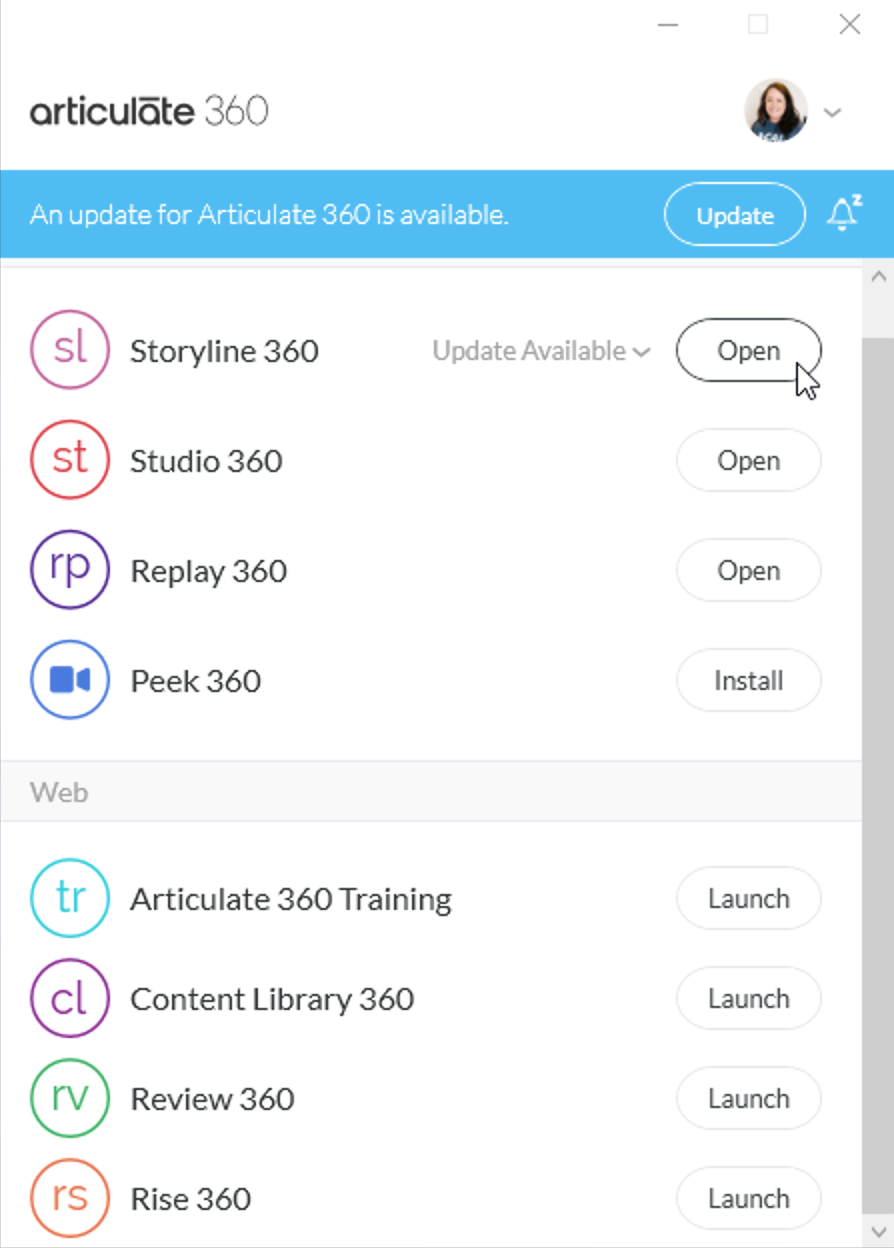 Why are the newest versions of Storyline 360 crashing on me?

I'm not sure why you are experiencing this behavior, but that's not expected. I've opened a support case on your behalf with the information you've shared here so that you can work 1:1 with a support engineer. You should be hearing from someone soon.

I reinstalled the March version and no longer seem to be experiencing the issues.

[cid:image001.png@01D60D9D.591E8FD0]
Confidentiality Notice: This electronic message contains information from Omnicell, Inc., and/or its affiliates, which may contain confidential information, and it is for the sole use of the intended recipient and is protected by all applicable laws relating to confidentiality and/or privacy. If you are not the intended recipient, be aware that any disclosure, copying, distribution or use of or reliance upon the content of this information is prohibited. If you have received this communication in error, please notify us immediately by email to the sender or by telephone and delete the original message.

Thanks for the update, Ron. I'll add this to your support case as well.

Sometimes i cant even get articulate app to sign in...its becomming a real problem and seems to be getting worse. For the price, you would expect this product to be absolutely stable

I agree that we want the software to be stable. I appreciate you contacting us and sharing that you're running into sign-in trouble.

Are you seeing an error when this happens?

The users above mentioned having issues with the software crashing, so it sounds like you're experiencing a different issue.

Hi there, I experience crashing of Storyline 360 since thre month now on my HP Zbooks. One had Windows 10 and Storyline - newest version - crashed when I opened the player settings.

So I sadly stopped using Storyline on that machine and changed all my project files to anolder machine.

Now, on my older Zbook, its still windows 8.1 I experience crashes first time today. I get very frustrated now. Even the newest Update doesnt change that. It will crash after some actions within one minute or so.

This is the report:

I have a deadline of a big project next week. Please help.

Try reverting back to the March version of the software.

Thank you for contacting us and sharing the issue you're running into with your software.

I've opened a support case on your behalf so that you can work directly with a support engineer. You should be hearing from someone soon.

My teammates and I have been experiencing a lot of issues with Articulate lately. There hasn't been one course in the 6 weeks that we have worked on for which we have not experienced technical issues.

The system will suddenly crash. It won't allow us to save or preview. We suddenly are unable to publish or open the file. We've been thinking that we needed the newest upgrade as often it would resolve the issue but it has become incessant. I will recommend my teammates to go back to the March version.

Sudden roadblocks like those sound frustrating. You and your team are not alone in this, and I'm glad you reached out!

I'm going to share these details with our Support Engineers so we can determine what's happening. Since you have a Teams subscription, you'll get access to priority support, so look out for our team's email shortly!

Hello,  I just downloaded 360 last week and have been loving it, but this morning it just shut down without warning and I lost about 0 minutes of work (but the file is fine.)

That was supposed to say 10 minutes of work.  Now Storyline completely locked up and I had to go into Task Manager to end it.

Hi Alison, Thank you for reaching out!
I’m sorry to hear you’re experiencing issues with Storyline 360. I have a few questions to narrow down the issue:
If a repair doesn’t solve the issue, I’d like to connect you with one of our support engineers. You can open a case here.

I am working on a local drive.  It's a new installation, so wouldn't think it would need a repair. The issues have not recurred in the past 3 days, so I'm standing by.