Replay button not replaying a layer with audio

The project has 16 scenes and each scene has between 2 - 7 slides/screens. Each scene contains at least one slide with audio, some have up to 3 slides with audio. The total size of the project is 36 Mb and built using SL360.

Attached, is a very cut down (two scenes) version of my project at 4 Mb, for demo purposes only, featuring only one scene of a particular subject and this version was an earlier incarnation of the project (design-build) so not influenced by any bugs, or is it?

For those that download my demo out of curiosity or to help, thanks, the problem slides are 2.2 and 2.3. I am thankful in advance for help or advice offered but I'm off to lunch now (UK time), so speak soon!

You're not leaving the audio layer, thus the button doesn't do anything. I'd create a trigger that goes to an empty layer so that you can revisit audio layer and have it play. You probably have to change up what shows on the Explain 1 layer.

Also, on the repeat audio button: get rid of the trigger to hide it when slide starts. Instead change the initial state to hidden. That's one less trigger.

And the callouts rotate between normal and selected. Selected states are pre-built and meant to be a toggle that can be selected/deselected. I'd create a custom "talking" state to switch between. Otherwise, the end user may click on the objects and mess up how they display.

many thanks, a critique I needed to polish this project some more. That's a good point about the selected states of the callouts, will create that custom state, I was aware of the user possibly wondering why they couldn't click something if they moved the mouse around the screen.

Reason for my button 'hide' trigger at the start of the slide was that I couldn't see/find any other way of hiding the button until it was needed. Something I obviously missed there.

Strange one about my audio layer, as I must have had something right in the beginning as the replay was working, but when it broke/failed and I then re-made the button and triggers I must have missed a step. I get the 'leave audio layer' part which has given me some ideas to work with. I'll get back,

Hi back, with an update. All is good the project is being fixed as of now. 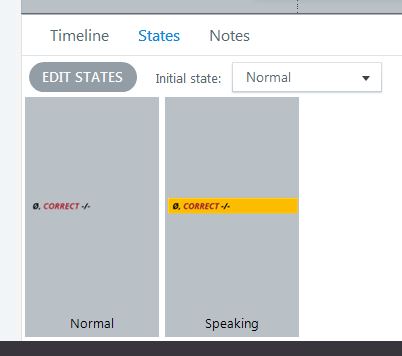 Added a new Table layer with my text copied from the Audio layer as a static with no audio: 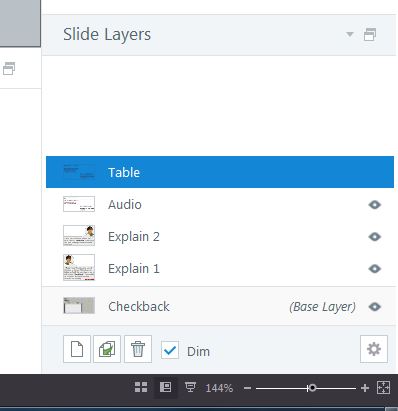 ...and then added some new triggers to my Table (shown below) and Audio layers to show/hide thus creating that break that the replay button needed. 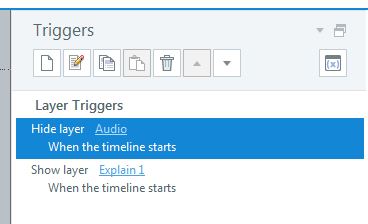 Thanks for the feedback - problem SOLVED.