I have a process flow chart/decision tree in my eLearning. It has mostly rectangle shapes on it with text edited on the rectangle. There are two rectangles that I rotated to appear like they're diamonds. With the diamonds, I have the text as a text box on top of the rotated rectangle for each of the states. (Editing the text on the shape wouldn't work because the text would be sideways ish.) Throughout the chart, I have markers. When the user hovers over the marker, certain boxes change states/appear to light up. When the user clicks on a marker, a pop up box/layer appears with more detail behind those steps. It works perfectly except those two triangles.

When the diamonds restore on mouse leave from the user hovering over the nearby marker, they turn a weird state that isn't even one of my states. This happens for both of my diamonds but nothing else.

I've included a screenshot of my trigger, states of the diamonds (remember the text is a text box, not edited on the rotated square/diamond), and a video of what happens.

Thank you in advance for any insight you might have!

Are you using a drag and drop interaction for these? I see in your screenshot that you are using the Drop Correct State. If you're not actually using the drag and drop functionality, I would suggest either using the Selected, Visited, or creating a custom state instead.

The built-in states are programmed to function in very specific ways. I've found that if I don't use a stock state the way it was intended (ie for visited or selected states usually), then I encounter bugs. Hope that helps.

Good thought! I wasn't using it as part of a drop interaction.. it was just the random state I grabbed.

I just now made a custom state and unfortunately the same thing happens when I roll away from hovering over the marker. Any other guesses?

Would you be able to post a file with a slide or two with the issue?

Here you are, Luke!

In full disclosure - I changed it back to the default drag correct state once it didn't work.. just because I'm a bit type A and I love consistency ;)

I deleted out all but a few layers and markers on the base slide for proprietary reasons. If I've deleted too much to effectively help, please just let me know.

Your real problem is combining the text box and shape. Combined shapes (whether grouped or not) don't always play nicely with triggers and states, especially hover. Instead of rotating a rectangle, just use the diamond shape, then you can put the text on the shape like all the others. 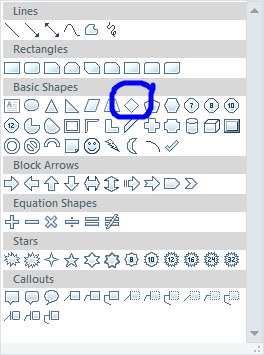 Whatever gyrations you have to go through to keep the text as text on the shape, it will be well worth it.

I *swear* I looked for an entire minute for a diamond and didn't see one..which is why I resorted to my rotated square with text.