I'm wondering if anyone else is experiencing issues with states in the latest version of Storyline 360? Just in general but here's what I'm experiencing that's becoming frustrating.

I drew a circle. Added a single character of text (think like a marker but custom due to another formatting issue I couldn't resolve). I added two states - hover and visited. The "normal" state is yellow with blue text. Hover and visited are both teal with white text. I exited "edit states" and changed the number from 1 to 2. The number changes for all 3 states but the colour on the visited state reverts to blue like the normal state. It happens every single time I try it.

Any insight or thoughts? I'm getting really frustrated trying to set up sample template slides for a client's corporate team to review branding... HELP!

Here are a couple of screenshots showing the before and after...

Before - formatting as I need it. 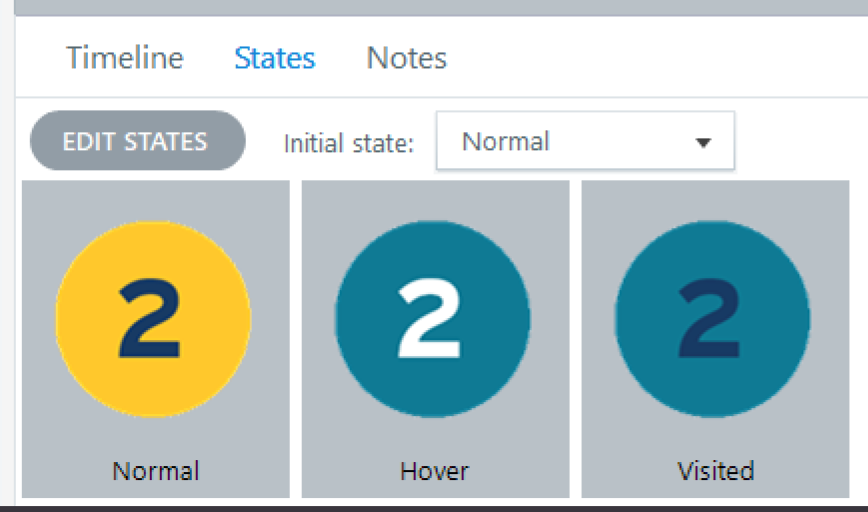 After - all I did (with edit states OFF) was change the number on the circle on this slide from a 1 to a 2. The visited state consistently changes to dark blue.

Update: I tried creating a new Visited state both by using the "new" button and by copying the Hover state (which is formatted correctly and stays the way I want it). Either way the text changes to blue when I change the text on the main object.

Update 2 - I may have solved the problem for now but I don't think it's supposed to be this way. I "reset" the formatting on the visited state. Then I changed the font colour to white. THEN I changed the fill colour to teal again. Now I can change the text on the main object and the states keep their formatting. That is an awfully strange way for this to function.

I've run into this issue (and similar ones) in the past and it can be frustrating to figure out why some changes carry across and others don't.

You may find this article interesting.

Thank you Matthew. Yes, your article is interesting and I appreciated the read. That only partially explains what's happening in my case as the actual states themselves show incorrectly after changing text on a copied version of that button. As you can see in the difference between images 1 and 2, the ONLY change I made was to change the main button's text from a 1 to a 2. Only the selected state was affected and it was affected in the state itself, not in relation to when I hover over it (although yes, that is still an issue that's annoying). Thanks for the insight though!

Articulate - +1 vote for a feature (like Matthew suggested in his article) that would allow a "selected hover" state built-in so we don't have to set up so many triggers for that to work.