Does anyone know how to make images take up the entire screen?  I have removed the menu, controls etc, but there is still whitespace on all sides of the image.  I would like the image to fill the entire screen.

It looks like you've only switched off the controls from the Features Layout section by unticking all of them. I find that this still leaves a white margin around the picture/slide.

What works for me is I set the Player Style to Modern and ensure that the Menu & Controls is set to OFF from the Appearance tab. 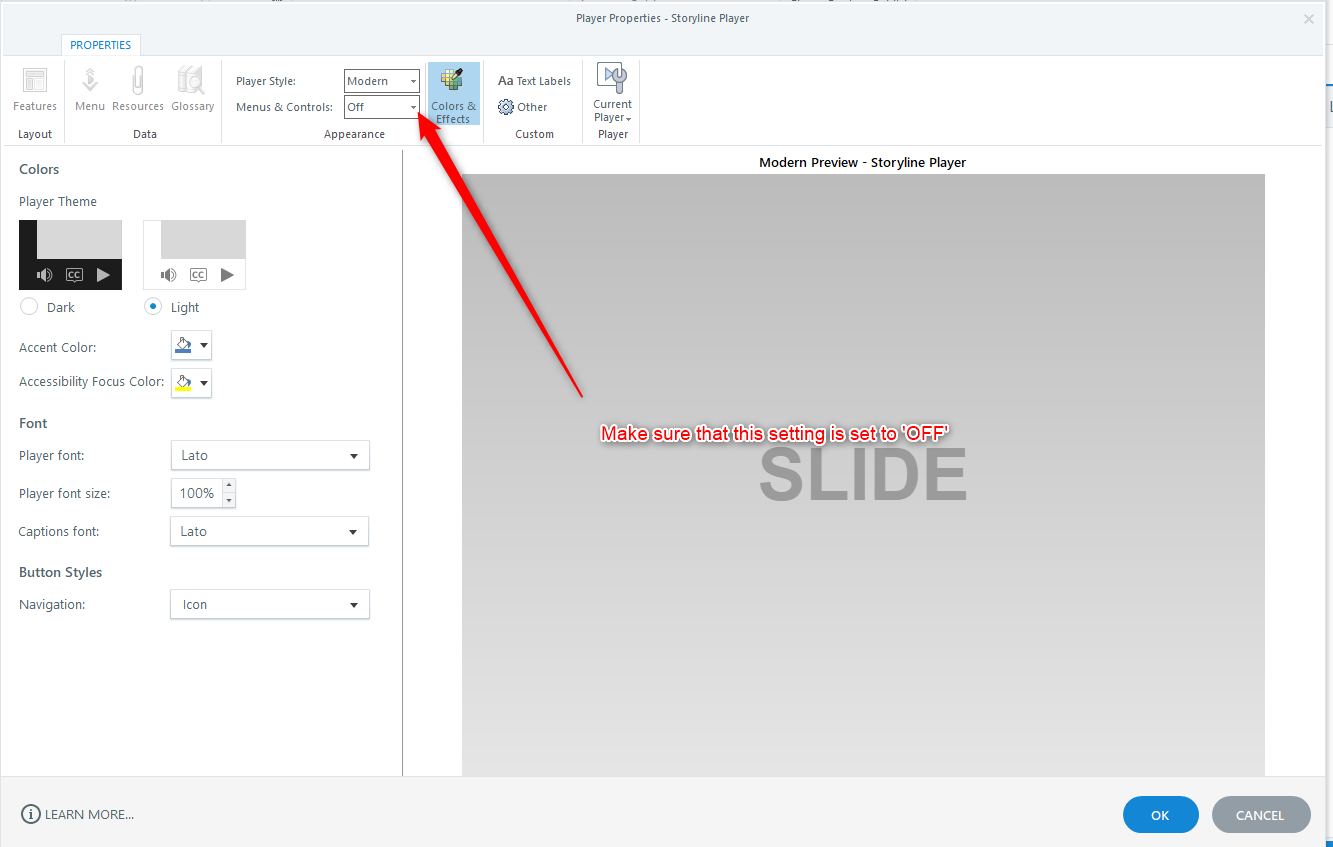 Let me know if this works for you.

Thanks!  I had found that, but that turns the menu off for the entire course. I was hoping to turn it off for single slides that look better fullscreen as a photo.  It seems if I really want the entire fullscreen for some slides, then I will have to create a layer that has the navigation menu and add it to each slide.  Unless someone has a better idea...? 😏😁

*A glitch though... if a slide layer has a custom menu for, say, 10 slides, then each slide has at least 10 extra triggers, adding 100 to a lesson. If the lesson has 20 slides, then it adds 400 triggers.  That's a lot of link arrows in Story View!  It may also have the effect of making all the slides appears horizontally in Story View.

You can customize the size of the image to be equal to the slide. Or set the image as the background image of the slide.

Thanks!  I have been making the image equal to the slide size, but it still leaves the whitepsace surrounding the image. The image as background is the same.  It seems the only way is to to turn off the "Menus & Controls" for  the entire lesson if I want to be rid of the edge that contains the menu, resources and Prev/Next buttons.

So it appears that I either have to have the whitespace or turn off all the great controls for the lesson and make my own controls as a layer.

You should to use Slide Master. Add Buton Pre/Next then add trigger Pre/Next Slide -> Exit Slide Master. I think it will help you faster in create buttons. 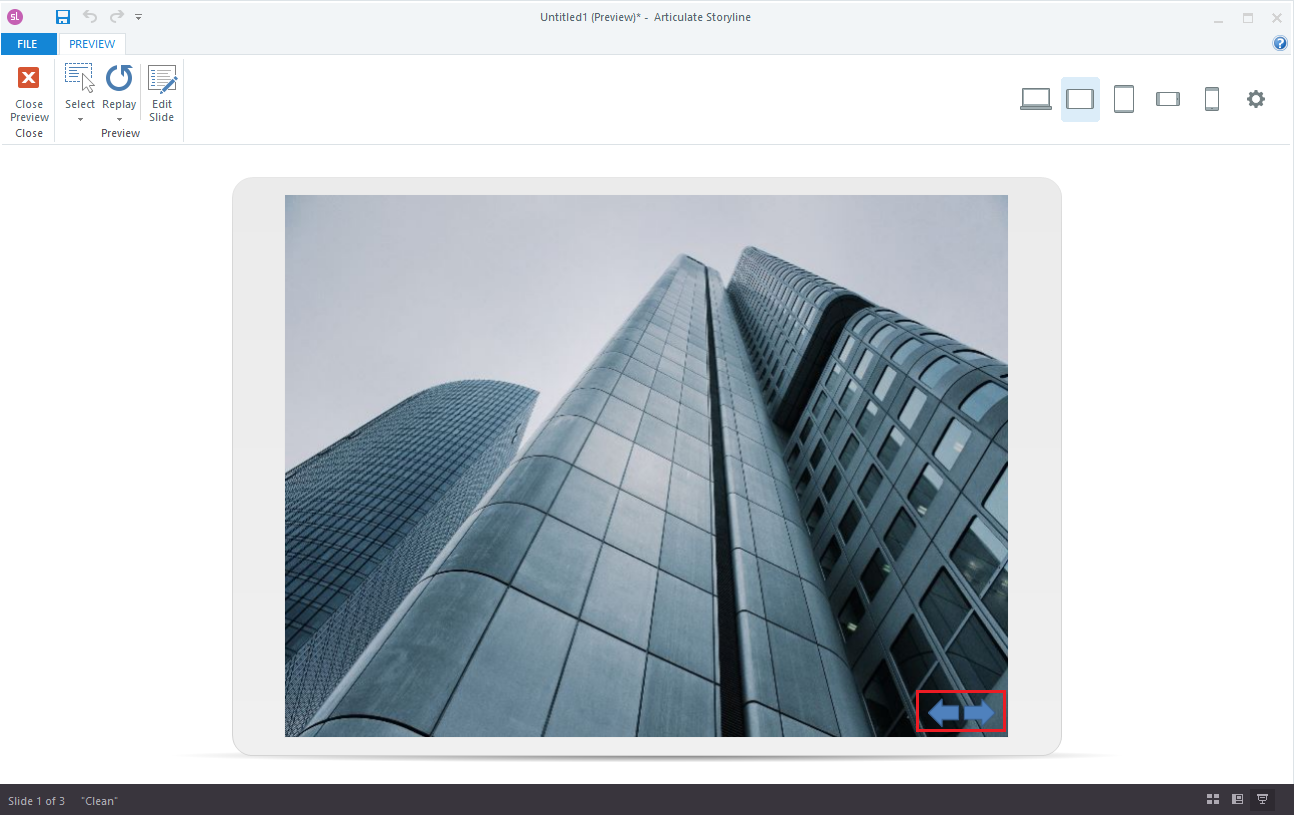 Thank you!  That solves all the major issues I was having, though now there are tweaks. For those interested, here’s the workaround I am doing (see screen shots).

First|   In slide master, I made the master completely blank. Then I added the menu icon and the back/next buttons to a blank slide layout.  So they show up on every page.  I also added a layer and made a menu with 6 sample buttons for the 6 slides.  So now each page using the master has the menu and buttons. Also, you can easily make a second master layout with darker or lighter buttons if you need more contrast with your background image.

Second |   In the slide view, the fullscreen image need to become the background image. You may need to tinker to size it to the full screen size.  That puts it under the master layout buttons.

The only remaining issues are that the custom menu does not indicated which pages have been visited or the current page.  and the “Previous” button apparently goes to previously viewed slide.  So you lose some well thought-out features if you customize.

Per the menu, there is a button state for “Visited” but it must mean something other than having visited that slide (perhaps used for quiz interactions?).  The menu from the player is great because it shows you the outline and the page you are on. It is part of the trade-off, I think.

Per the previous buttons, if I use my menu to jump around, then the previous slide is the one last views.  So if jump from slide #1 to slide #6 in the menu and then click previous slide, it will take me back to slide #1, not slide #5.  This could cause confusion and seems a reason for sticking with the Player Menu.

Thanks for the comments!  I am trying to get a very minimalist effect.

Nice work! I have not tried it yet though but I am sure that this would work.