Hello, all. I have a very large exam for a course. It is comprised of 9 different question banks that pull a certain number of questions from each one for a total of 100 randomized questions each time the student takes the exam.

I have variables built in to provide a question number counter, which is working just fine until I go to Review Quiz mode. Per THIS thread I set my number variable to subtract 1 when the user hits "Previous" so that the question number goes down if they move back while reviewing. The problem I'm having is that the Previous button is triggering the reduction in the variable number but it isn't actually showing the previous slide. I thought that action would have been intuitive. Since it didn't appear to be, I created a separate trigger to jump to previous slide when the user clicks Previous. However, it's still not working. I'm finding that if the counter is behaving properly, the slide isn't actually moving backwards. If the slide does move backwards, something funky goes on with the counter.

I initially had my triggers set so that it did a +1 when the timeline starts. However, when things started going funky I thought that might have been conflicting with the -1 on the previous button in review. So I changed that so that my "Begin Exam" button on the instruction slide sets the variable to 1 and then on Submit/Next it triggers the +1. Again, the variable behavior is working, but the slides aren't moving.

I will attach my file. Any help would be VERY appreciated... I'm stuck!!

Hope this is along the right lines- sorry if missed your point completely!

I have added the 'Previous' button back on to the player, and then changed the order of your triggers on the slide master so that if the learner clicks submit, it adds a point and moves on, and if they click previous it takes a point off and moves back a slide. (below) 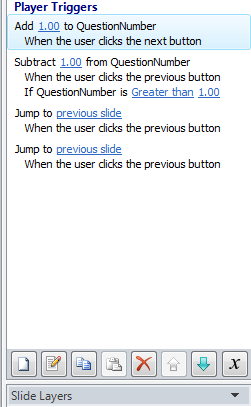 I have re-uploaded your file, and it seems to work for me- but I only did it to the first section of questions as the large file was killing my pc- but cant see any reason why this wouldnt work for the whole thing. (in the copy of your file I am uploading it will stop after 6 slides- due to the quiz set up- but thats just because there are no more questions.)

Thanks for the reply, Will. I implemented your edits into my file but upon review the counter now isn't working at all. I'm not actually concerned with the students being able to go backwards during the exam itself, but during the review.

Will, your exact response may not have fixed the issue since I think you thought I was referring to going backwards during the exam... BUT your rearrangement of the triggers kick-started a few things that brought me to a solution and now it seems to be working. So thank you! It appears it was something funky with the ordering of the triggers that was causing it not to work properly..

FYI, in case anyone finds this thread in the future with a similar problem, the solution was to begin with an instruction slide that sets the question number variable to 0. I removed the back/forward buttons and added a custom button to begin the exam. On the slide master for the questions I have the following, in the following order:

(before, when it wasn't working, I had some other order)

Then, on the results slides, I have a trigger to re-set the QuestionNumber variable to 1 when user clicks both the review and retry buttons since you don't go back to the intstructions slide that originally sets it to 1.

Anyway, seems to be working now!

Glad you got there in the end!

I'm experiencing  the same problem with Previous button not working on quiz review, only the Next button works, though I'm not using question number variable, nor have Back/Prev buttons along the quiz, only the submit button.

Do you have any idea what might cause this problem and what can be done to fix it?

FINALLY I  found what caused the problem - there was no trigger for the Previous button, since no such button appeared in the quiz, so I made a new slide that was not connected to the quiz flow and added the Prev button & its trigger, and copied the trigger to all question slides. now the previous button seems to work seamlessly on Review.

Hope this will benefit anyone in the future

Thanks for posting, Oren!

Hi Oren, I am experincing the exact same problem. I would like to try your solution, but I am not sure where you created the new slide. Would you mind stepping it out for me?

In mine, the next button also puts the user in a loop.

The resolution is to use question banks! It works perfectly.

I am about to resurrect this thread. Since I am not using any variables in my quiz, the first solution is not applicable. However, I did try the adding of the slide with the previous button trigger then the copy and paste...that did not work. I then I tried the suggestion of using a question bank, that also did not work. I am using Storyline 2 version Update 11: 1609.3020. I have attached a copy of the .story file. Any help is appreciated. A non-working previous button in the quiz review is unacceptable. Now, if that could button could be removed, that would be acceptable.

There may be some corruption in your file. I was able to import your slides (which has a mysterious 2nd scene I didn't see in your file) and the Prev button works as expected during review.

This assessment was/is part of a much larger project. What I am going to do is re-do the quiz slides and see if that fixes my problem. Stay tuned...

I have recreated the Assessment as a stand-alone file. Recreating the file did fix a couple other issues, but not the Previous button problem. Did you publish the file and then view or upload to the LMS and view?

Pretty sure I only previewed. Taking another look now.

Looked the same to me when I uploaded to SCORM Cloud for testing:

I took a short video clip so you could see the previous button is working for me.

I believe that I have solved the Quiz Review navigation (PREV and NEXT) problem that has been plagued a lot of developers within this community.

Not only does my example I've attached allow you to freely navigate back and forth in the quiz review, but also allows you the ability to go back over the questions prior to getting to the review.

Hope this will help those needing it.

Thanks for popping in to share Ben. Looks like you took it a step further to allow for the buttons to work at anytime, but I'm sure this may help someone in the future.

Since this seemed to be an issue that a lot of developers were having dating back well over 4 years ago, I thought I would throw my hat in the ring to help.