Trigger an Animation in Storyline

Has anyone figured out how to trigger either a screen animation or an object animation in Storyline? This would be best on a variable value.

Are you wanting to trigger these animations based on a cue point in the timeline?

If there is more to your setup that I assume, here's another approach:

The above works well with media such as video and audio, but if it's animation actions using Storyline's tools, manipulating the timeline might be the best option.

You can also add animations on layer

By using hide  unhide you can make it look like more animations are available.

This is a great question as I would like to know more.  I have added a menu that appears to slide in from the bottom using a button trigger and object animation. The object is on a different layer than the button that triggers the menu layer to appear. I also created an exit button with a trigger to hide the layer when the user clicks. I would like for the layer to hide the same way it appeared, by "sliding back down versus just disappearing. Any thoughts or ideas?

I forgot to mention that I tried animation to the object for it to exit to the bottom, but it does not work when the user clicks the exit but. It still just disappears.

tripger exit animations by adding a new layer and duplicating the object onto that layer and setting an exiti animation on that object, then just call the layer when you need it to disappear and on timeline start of that layer set the object on the base layer to hidden

I'm having the same issue (I think), but I don't think I'm seeing the answer I was hoping to find here.  Here's what I want to do:

* From the base layer, I want to click a button and have a layer animate into view

* From the layer that was animated in, I want to click a button on that layer to animate that layer out of the view

I don't see a way to do that.  What I see is the ability to animate the entrance and exit of a layer; if I set both of those, then the layer animates in the way I want, but then it does something confounding:  the layer animates *out* with no action from the user after about 5 seconds.  That's certainly not what I'm after.  I hope that I'm just missing something here, since admittedly I'm fairly new to Storyline.

Take a look at the demo slide attached, which I quickly knocked up while having a coffee. I think it's what Phil was saying. 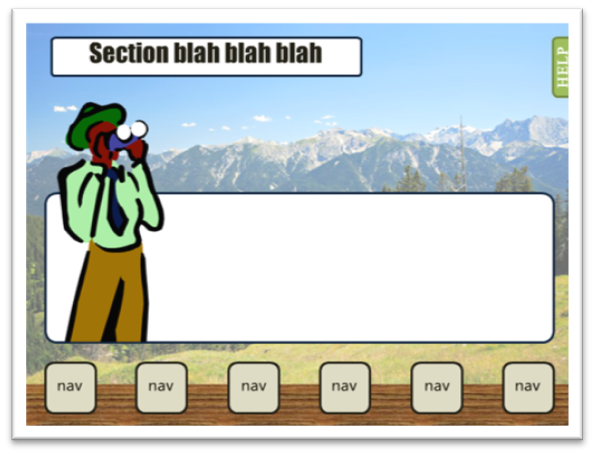 The animation is on the [HELP] button in the top right. Let's say you wanted to reveal a tip or some extra information, you could have it slide out and when you click [X], it closes again with the same animation (in reverse).

That's what you're after, isn't it?

Note: The "hide help panel" layer has a timeline of 1second and is set to hide on timeline end. If you're new to SL, you can find those settings by clicking the gear icon on the layer.

First of all, thank you for the demo.  It's very gracious of you.

But I'm not sure I fully understand what I'm seeing.  It looks like, in order to get the "slide in/slide out" effect that you are literally duplicating a layer, and one layer has the "slide in" effect, and the other layer has the "slide out" effect.  So, when the red "X" button is clicked, what's really going on is the "show" layer is being hidden immediately, the "hide" layer is being shown, and then the "hide" layer is immediately being animated out.  Do I understand that correctly?  Is that really the only way to do this?  That seems kind of crazy, no?  That's a duplication of work, which means more time to develop and (worse) more time to maintain (e.g. if I have to make a content change, I have to remember to make it on two layers instead of one).

Is there really no way to have a single layer have both an entry and exit animation, where each are triggered by user action?

layers dont have a entrance and exit animation only a transition.

You could get slide in out if you use duplicate slides.

Storyline will not do what you want easily, if you dont want the extra work dont do it

Thanks for the reply.  Sorry if I'm using the wrong terminology.  This just seems like a glaring, glaring oversight to me.  It seems logical that if you're going to animate a layer in, that you'd want that layer to exit with the same effect, no?  What's the rationale behind Storyline being designed this way?

I don't know.  You can add it as a feauture request.  I have been using it for over 18 months now and really dont have an issue with it.

There is ongoing work on adding extra animations and this may be part of the new animations, again I don't know.

Not justifying the whys, really that is for Articulate to do. it can be achieved but at the moment you need to do extra work

Huh.  Well, okay.  I can survive without it for now.  Just surprising.  Thanks for the insight.

Storyline is an amazing piece of software as is. In retrospect, the first version of Flash had a lot to be desired, but over the years with a lot of use and feedback it evolved into a powerful application development tool. Storyline's first version in comparison out ranks all before it. I'd encourage submitting feature requests when you come across something you want to be able to do, but currently can't. It's that kind of feedback that helps the engineers how to prioritize what goes in the next build. The more requests for the same feature I'm guessing will bump up it's priority level.

That all said, perhaps this will help in the meantime. It's actually fairly simple to set up.

3. Open layer: Set the animation on the object(s) to Fly In from right when Timeline starts.

6. Add Layer trigger to Close Layer when Timeline ends. Set Timeline to 1 second or less depending on speed of animation.

The trick here is to combine the objects Fly Out animation in combination with closing the layer at end of its timeline set to the same approximate animated time - approx. 1 second or less.

Hope that helps at least get your creativity flowing.

Thanks for the reply.  Your solution functions more or less like Leslie's.  The show-stopper for me is the duplication of layers.  Across one slide, that's not so bad, but across an entire project, that duplication would make course maintenance a headache I'm not willing to deal with.  But you're right; it's a new product and so perhaps this will be a feature they add down the line.

Still quite simple if I'm understanding this time. Just repeat the above steps but put them on a Master Slide. If your course has more than one Master Slide you'll need to duplicate it there.

Thanks, this is what I was looking for, however, it does not work correctly if there is a hover state of the button. When I have a hover state it opens, but does not slide back down.  Not sure why, the triggers are exactly the same.  Any ideas anyone?

In a similar fashion, I have had success in revealing multiple objects to the stage, per the users discretion. My goal is to create a "build your own" routine. Each object has a motion entrance and exit transition, as suggested above. There is no issue as long as one object is visible on the stage at a time, or you swap between objects reveals/exits. The problem comes in when attempting to initiate the second exit action on any object, and objects begin to cut off. It appears as if a hide function is overriding the exit transitions. I have attempted a variety of button methods, as the sample file shows. I have also messed endlessly with the layer settings. No luck. Any ideas?

I played around a bit more and figured out that you it is best to have the additional object triggers on the hide layer and not the show layer.  Now everything works except for markers in the slide master.

Thanks for all the assistance.

I was searching for some basic instructions in how to trigger a text box to animate (fly in) on the screen on a mouse click. I have read this thread but my request I think is a lot simpler - I just can't find the 'start animation on mouse click' command in the ribbon - as it is in PPT.  Am I missing something or does Storyline  require a more complex workaround. I can set up all the animations on the timeline but I want the transitions to be controlled by the user rather than by a duration setting.

It's a bit different than in Studio '09 using PPT.

Here's how I'd approach this:

Might have to fiddle with it a bit to get it to behave like you want but that should get you started.

I have three text boxes which I want to fly into the same area sequentially, one text box each time  the user clicks the next (custom) button.  Can I apply multiple triggers to the same button within a single screen?

It's easy in PPT but I haven't yet understood the logic of Storyline.

If I understand what you're wanting to do, it's a bit more involved than PPT.

We don't need one for the first text box because...well, it's the first to display.

At first I thought it was a simple solution I could reply to, but the more I thought about it the more I figured I should build a test file to see if my theory worked. My first did not. The above is what I came up with based on how I understand what you're wanting to do. Others may have a better or more elegant approach, though.

Oops. Download the above .story file and Preview the slide. Once you "see" it in action the above instructions should make better sense.

I really appreciate your help on this one - that's just what I was intending, although I must admit I still struggle to get my head around the Storyline logic - I suppose I'm looking for a command to trigger the animation but the only triggers seem to be to change the state from hidden to normal.

One final challenge I'm having. The button I want to use is actually my  custom Next button. I thought I could complete the sequence by adding a final trigger to the sequence by adding a Jump to next slide when user clicks Next button on the condition that Text 3 is equal to normal.  This now seems to over-rule the trigger to display Text 3 before jumping to the next slide.

Sorry for missing your request to use the same button to jump to the next slide. But don't sell yourself short. You're close in your logic. Adding another trigger to Jump to Next Slide by evaluating when Text 3 is Normal is the correct way of working through a solution like this.

Just keep thinking the way you are. To be honest, I approach challenges like this with a pencil and a pad of grid paper. I talked it out in real language otherwise known as psuedo code. Example of your challenge would be something like this:

Next, just break each one of those down independently and get it work. The first step is a simple trigger. Now add step 2 to step 1. Test. Okay, that works. Now add step 3 to the process. Test. Keep going until you work through your steps.