Using triggers for navigation and layers

My company recently upgraded to SL2 and I'm making minor changes to a course that was originally created with SL1, and my triggers to force navigation don't work anymore.

I used to place an object off-slide that only showed up at the end of the slide to do two things: pop up a layer telling the user to chill out when they hit the next button before the slide was done and allowed the next button to move to the next slide when the slide had finished. 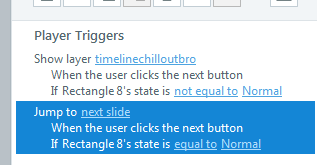 Now, the chill out layer doesn't show up at all until the timeline of the slide has ended- even when the off-slide object- rectangle 8 in this example- has showed up and the state is normal. The next button does not work to advance to the next slide at all.

I've tried the workaround in the article below, published with both restricted and free navigation, and still nothing.

I need the ability to force users to listen to the entire slide and to pop up a layer when they try to use the next button before the timeline has ended, preferably without having the rebuild the entire slide, because I do not have time for that.

Any guidance is appreciated!

Would you be able to share the .story file for us to take a look? That would be helpful.

I can share it via the case submittal process but not here, as it's protected by company policy and I can't just put it out on the internet. For the purposes of this training, I just opened with SL1, made the updates to that file, and republished. It would certainly be nice to have a way to work in SL2 with old files without losing functionality, though.

Hi Kate! I just responded to your support case, but wanted to pop in here for anyone following along.

It appears that you've run across an issue that has been shared with our QA Team. In SL2, the object is taking on the initial state, regardless of if it's on the timeline yet.

I've shared your case and this thread so that we can update when applicable.

This seems to work for me, but don't ask me how. It seems to me that the logic is backward, but that may be the issue Leslie mentioned.

There are a lot of other ways this might work, but I think this will get there with the least change, if it is reliable.