Is it possible to change the state of two buttons on one screen using one variable?

I start with a screen with two buttons. One is active, and the other is inactive (At this point). I have a variable set to change from false to true when the user finishes the first scene. Once they finish the first scene, it jumps back to the slide with two buttons. I want the previously inactive button to become active (which works just fine with a trigger), and the previously active button to become inactive (which does not seem to work with a trigger).

Is this because I am using the same variable change to trigger both state changes?

I have tried it and it works fine for me. The way I did it is adjusting the variable at the end of my slide 2. When coming back on slide 1, the states of the buttons change on timeline starts if my variable is equal to False.

Hope to help! Have a nice day!

I tried that, and it was also a no go.

Here are the triggers I have set. 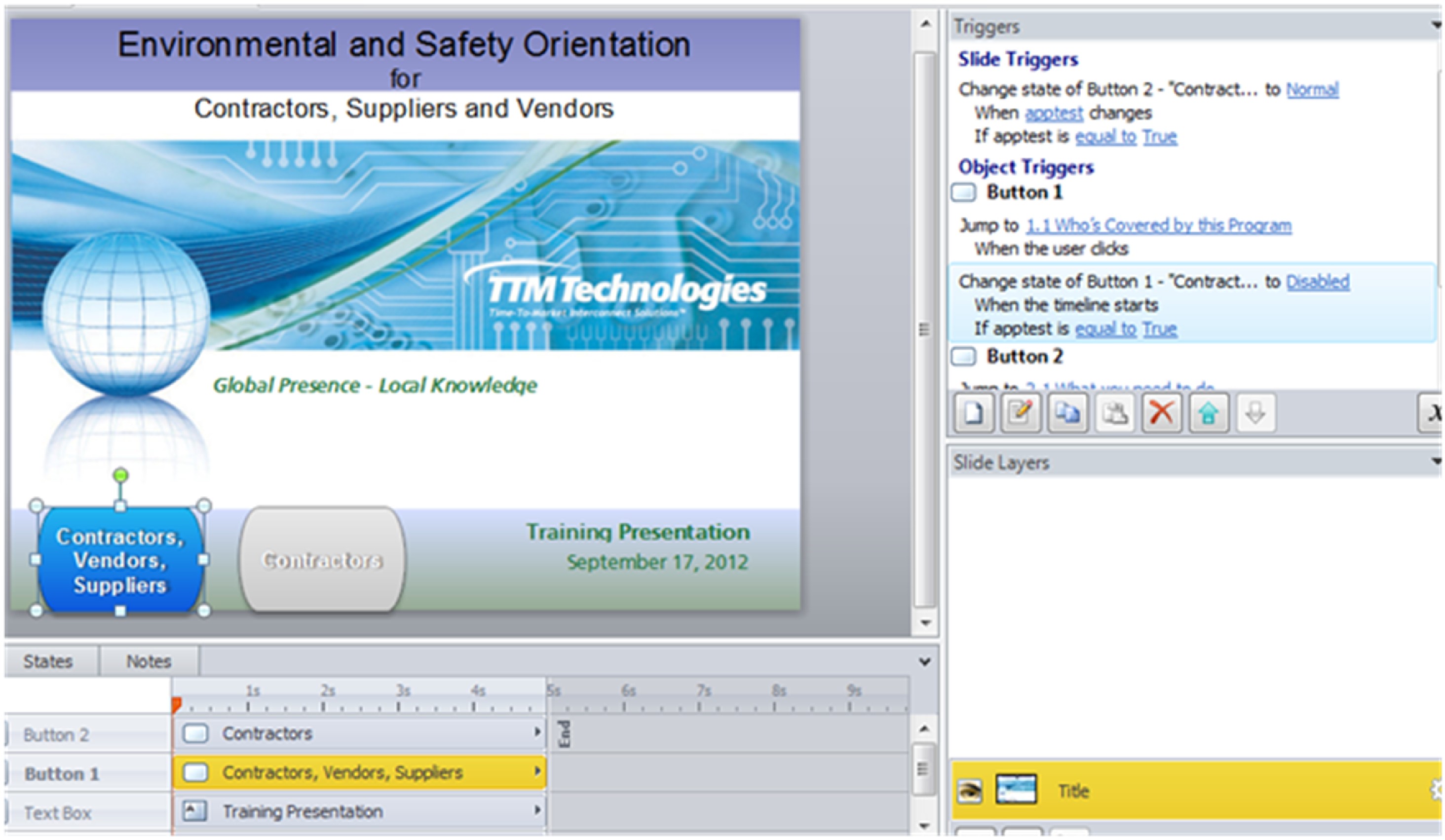 Has I see the first trigger, on top is in the Slide Triggers and is "When apptest changes" which cannot work. It has to be when the timeline of your slide changes. Can you try it?

Also, check to make sure that the trigger on button 1 is set to When the timeline starts of your slide and not the button itself.

The trigger on button 2 that you say "cannot work" is the one that IS working. I have that set so that when the variable changes, it changes the state. I also added a condition that says the variable must equal true, and it works......Is the way I have this one set up, the reason the other trigger is not working?

I have button one set to "change state of" when timeline starts. What should I have as "Object"? I currently have button 1 selected there, should that be the slide?

Yes, it should be the slide.

I changed it to slide, and then did your suggested change onthe other trigger, and IT WORKS!!!!

Thank you for your help!!

There is no listener in Storyline to look at your variable at all time so that is why the best way to use them is from Actions just like "timeline starts" or "user clicks". That is why I am surprised that the first trigger works since it is triggered when the variable is changing... which is not an action in itself to make storyline looking at the value of variables.

Hope this helps. English is not my first language and I want to give as much information as I can and I guess that sometimes I may sound confusing... or confused!

Just to make sure, are all questions from quiz 1 and 2 associated to the second result slide?

Yes, and it tallies them in the results. When I click on "Review Quiz", it only let's me review half the questions.

Are the two quizzes in two different scenes? I have made a test with two scenes and I could only review the first scene question even though my result slide was in the second one. To me it looks like a bug worth reporting.

Don't know if it can help you but it looks like when reviewing, I review the first slide and then come back to the result slide related to that first quiz... If I continue clicking on the next button, I then have the review of the second quiz. So, at first I thought it wasn't reviewing all of the questions but it does. The problem is that you have to go by the first result slide that makes it look like it is not working at all (because I wasn't clicking assuming this was the end :-( ).

Don't know if that may be it for you also.