When in Try Mode, how do you change "Show Hint Captions" from "When hovered" to "Always" and vice versa without creating a new scene?

When in Try Mode, I would like to be able to change, within the same scene, how Hint Captions are displayed:  either Always or When hovered.

If I then want to change the scene to be Show Hint Captions = When hovered, it appears that I need to convert the initial scene to a new scene.  Using the setting of "When hovered", layers are used. 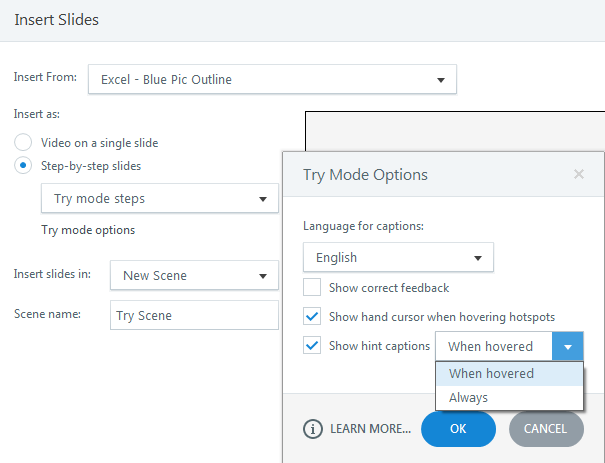 A couple of things happen though when creating a new scene from the original scene:

So, I was hoping that there is a simple solution that I am overlooking to change how a scene's Hint Captions are being displayed...in case one changes their mind after creating the scene.

Also, is there a way to have ALL Hint Captions delay their entry on a slide (e.g. when using Show Hint Captions = Always) without having to adjust the timing on every slide?  I would like the user to give a little bit of thought of what to click on the screen before prompting them.  (e.g. 3-4 second delay on every screen before the Hint Caption appears).

Hi, Steve -- Thanks so much for reaching out here! My apologies if I am not clear on what you're asking, but have you had a chance to check out this post that appears to be on a similar topic, and some of the suggestions offered? Please let us know if that will help, and it might also be useful if you could share your file so that we are able to get a better understanding of what you may need. :)

Thank you for your response, Christie.

I think that I understand as to why the captions will revert to their original settings/content when I switch from When Hovered to Always and vice versa.  As I understand it, there is an original copy from when the recording initially took place that is used to create any new scenes whether they be View, Try, or Test.

So, I believe I can narrow my question down to the following:

Is there a way to have ALL Hint Captions delay their entry on a slide (e.g. when using Show Hint Captions = Always) without having to manually adjust the timing on every slide?  I would like the user to give a little bit of thought of what to click on the screen before showing them the caption.  (e.g. 3-4 second delay on every screen before the Hint Caption appears).

Is there a global setting, for example, to handle this scenario?

Hi, Steven -- Many thanks for your reply, and for the additional clarification of what you are hoping to accomplish. As the captions default to the beginning of the timeline with a .25 second fade in/out, unfortunately, I do not know of a way to do what you are hoping for, so I will have to defer to the community to share any additional ideas or workaround they may be able to share.

Also, if you'd like to share your ideas for features or functionality you would like to see in the future, you are welcome to use this form to do so. :)

I appreciate the link to submit ideas for features and functionality.  :-)