Where are the back-ups?

We recently moved to SL360 from SL2. Whenever I open an existing SCO, it  converts to 360 and gives me the message "but don't worry, we'll keep a backup." Where exactly are those back-ups? Now that some files open in 360, when I try to open SL2 templates using "Open With" it says they were created in the later version so won't open with SL2.  Whenever I use "open with" with one file, it changes the icon on ALL SL files but not a single one of them will open in 2. This means I have to perform testing and remediation in anything that wasn't created in 360 since I can no longer access anything in SL2. Because not all users in our company could upgrade at this time, I need to maintain templates in 2 and 360 as well as open SL2 files to QA or modify them. Where are the backups and how can I manage this transition using dual templates and keeping SCOs created in SL2 actually in SL2 to avoid the need for testing and remediation?

PS, if I say "not now" to the conversion, the file simply doesn't open.

Your course will be upgraded automatically, and a backup copy of the original project file will be created in case you need to go back to it later. (Storyline 360 projects can't be opened or edited with previous versions of Storyline.)

You'll see them display in the same folder as your other Storyline files: 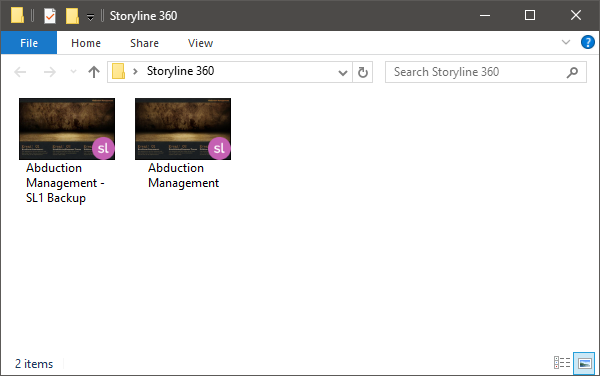