Progress meter – How to create one in Articulate Storyline

A couple of months ago I uploaded the material design template. One community member asked me how the progress bar worked. In this post I will explain how I did it.

Note: this tutorial is based on the material design template. Use this template to see the progress bar in action.

The first thing you need to do is to build a progress bar. This can be as simple as a bar which gets larger as you progress in the course. My progress bar can be found in the slide master, on the menu slide. This is a rectangle shape with 20 states (the normal state is 0%, 1st state is 5%, 2nd state is 10%, and so on). So when a learner is on 60 % of the course, the progress bar will show state 60.

See http://www.hongkiat.com/blog/beautiful-progress-bars/ for inspiration for progress bars (thanks to Nicole Legault).

The second part is the tricky one. You need to count the visited slides. There is a variable (SlideVisitCounter) which counts how many slides are visited. Each time a slide is visited for the first time, “1” will be added to this variable. However, when you visit a slide for the second time, it mustn’t add “1” to this variable.

You could use a T/F variable for each slide, which changes if a slide is visited. However, when you have a large project, this isn’t sustainable. So I did the following:

Each slide has a checkbox. When this checkbox is unchecked, it means it isn’t visited before and "1" must be added to the SlideVisitCounter variable. When the checkbox is checked, the slide is already visited. 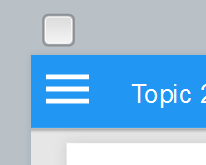 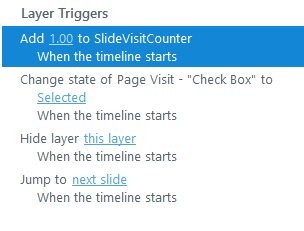 Remark: When you use a quiz slide, you need to apply the two triggers of the next button on the correct slide.

The progress percentage is calculated in the slide master on the menu slide. I used two extra variable, which are called Decimals and Percentage. See the image for the corresponding triggers: 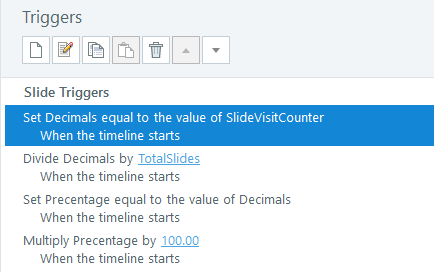 So after this step we have a variable Percentage which contains the progress percentage.

4. Changing the state of the progress bar.

So this was it. I hope it is useful. If you have any questions, don’t hesitate to ask.

This worked great! Thank you so much for your instructions.

Thanks for providing such a detailed explanation -- as well as the template itself. Very helpful!

Thank you for your comments

What if I want to display the percentage completion by determining if user finished the video on the last slide before jumping to the next lesson?