I'm on a Storyline module at my job, which needs to be translate over multiples languages, including Chinese, Japanese and Korean. Those translations were given to me in .doc files, that I put into Storyline.
The Chinese one was perfectly incorporated into the soft, the Japanese one causes the soft to be very slow but was OK. But the Korean translation just don't let me previsualise anything, causing an neverending loading screen, and crashes when I'm trying to publish it.
I've asked to the translators we're working with to check their files, but they confirmed me that it was clean.
I'm kind of stuck right now. (I would gladly give you the project files, but I'm unfortunately under NDA.)

Any thanks will be greatly appreciated !
Have a good one

We've seen an issue where the publish crashes when using Korean in the player, but I haven't seen it just when importing in the text. Are you overwriting the same file each time? Did you confirm that all these files are saved locally and adhering to the guidelines here for project files?

Our team can sign an NDA with you if you're able to share that way, and you could upload it here.

Each time I'm importing the translation, I do it on a freshly duplicate file of the original one. My files are saved locally, and seems to be clean in their path names.

Thank you for aiming me towards this assistance website, I got the permission to share my project files over there, as long as it is confidential.

Yes, it's entirely confidential with our Support team - and if you need us to sign an NDA, you can upload that prior to sending the file.

Let me know once you upload it there and I'll keep an eye on our case as well.

Thank you very much for your interest !

Thanks Julian- I'll keep an eye on it.

Hi, I'm having the same issue here: Korean slides make SL2 crashing. Did you come to a solution? I think the problem is related to the korean characters. I'm saying that because I just changed every korean text box with our chars and then that particular slide worked fine.

Thanks for reaching out here and sorry we didn't get back to update this forum discussion. We've seen the publish crash when the player is using Korean characters or the slide titles are using Korean characters - but you just have them on the slides themselves and are still running into problems? Have you reached out to our Support engineers so that we could take a look at your individual set up?

@Ashley, we are having a similar problem--- is there a work around?

Do you have the Korean characters in the slide titles as well or using the Korean player language? That's an issue still with our QA team, so nothing new yet. We’re still working on this bug, and we’ll definitely let you know when we know more.

If you're experiencing something else with Korean characters, could you share a bit more information including a sample file with us? You can send it along to our Support Engineers here.

I'm experiencing the same problem with the Korean language options but only in the Player. If I leave the player setting as English and the screen content is in Korean the file publishes just fine.  If I include the title in the player frame in Korean the file will no longer work properly.   Is there a solution for this yet? Attached is the result of adding just the title in Korean.

That's still an open issue with our team and this discussion is flagged for follow up once we've got an update.

Has there been any progress made on this issue with the Korean text?

Hi Sara, we've still got this issue on our radar for Storyline 2. We’ll continue to keep an eye on it to evaluate how many customers are impacted and what impact it has on courses. The number of customers and depth of impact are two of the elements that help us prioritize bugs and fixes.

Here's some more detail about how we tackle bugs.  I'm really sorry that I can't say if this issue will be fixed, but you're in the right place to stay updated on this bug's progress!

I did want to mention that some folks have found success with changing the the Player > Colors & Effects > Player font to "Arial Unicode MS". 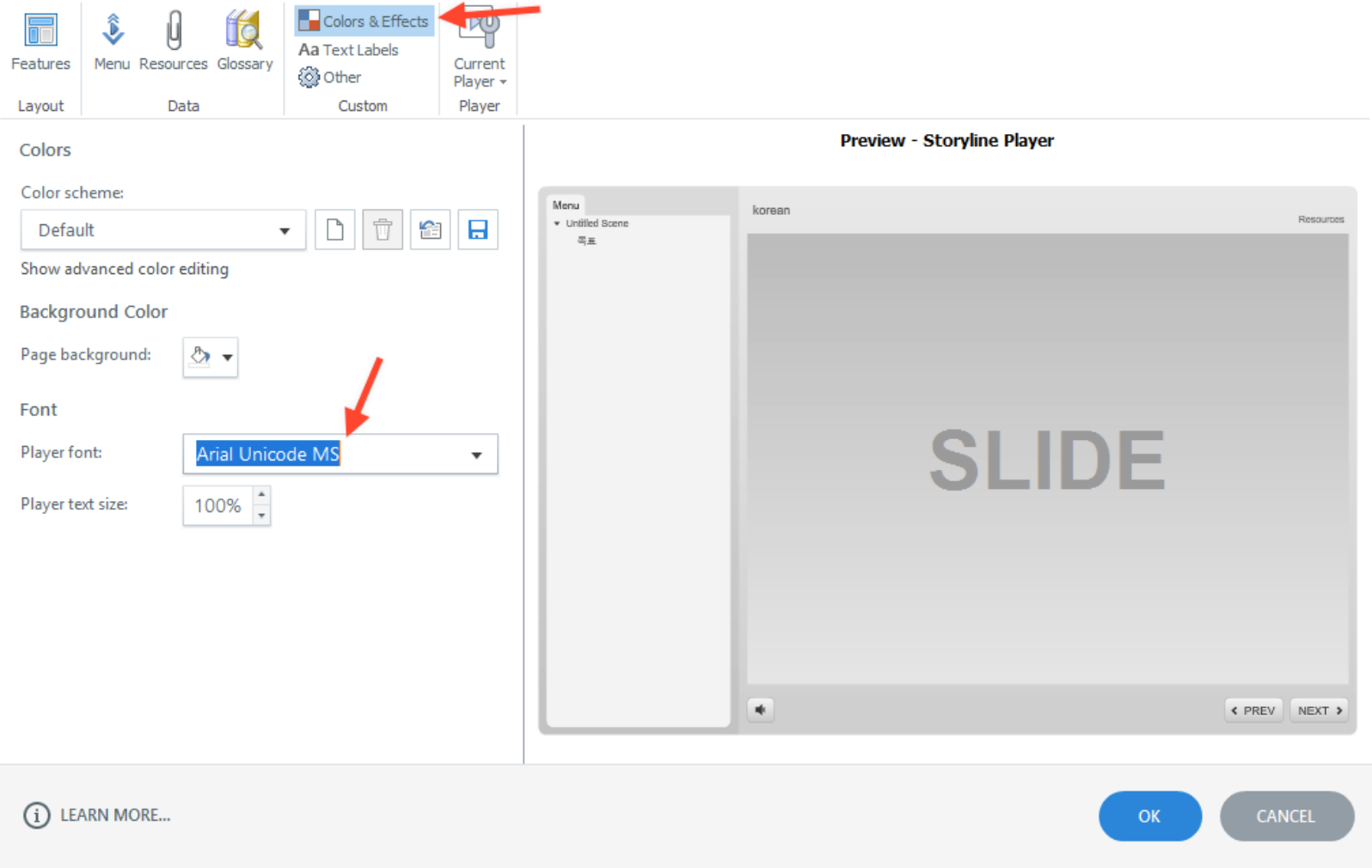 I have made a storyline module, which needs to be translate over 11 languages, including Korean. Since the deadline is quite close and I have already sent to translations other modules, I kindly ask you what I have to do and encouraging to solve this issue. :)

I already tried that and it doesn't change anything.

So what is your suggestion for those of us who need to provide training in Korean? This creates kind of a large issue for us.

Does SL360 have this same issue?

I'm very surprised to see you say "if this issue will be fixed". That's not an acceptable answer to me. On one hand you say you have a multilingual platform, and on the other you say you don't support Korean (due to the number of customers impacted). Korea is an important market for us, and it should be for you too.

I've done some testing with my team, and I wanted to share what we found.

We've seen that installing the Korean language pack on Windows resolves this issue in Storyline 2 Update 12. Here's how:

We've also seen that this is not an issue in Storyline 360/Storyline 3.

If you'd like for us to look into your file and do some further testing, you can share it privately with our team here. Our Engineers are around 24/7 to assist!