Layer not displaying as expected

Hi - I am loving building my own simulations in Storyline! I've run into one glitch, which I can't figure out. I can send the file, but in a nutshell, here it is:

I have a slide with four layers:

Base layer with rollover hotspot (and "Restore on mouse leave" is selected), which triggers the second layer.

Second layer with clickable hotspot, which triggers the third layer.

All is working perfectly so far...

Third layer with rollover hotspot ((and "Restore on mouse leave" is selected), which is supposed to trigger the fourth layer, but instead it shows the first layer.

I tried changing a bunch of options and found that if I do not select the "Restore on mouse leave" in the third layer then it works as expected. However, that's not the effect I'm hoping for. And not sure why that option would make a difference? Any thoughts? Thanks!

First, make sure that your trigger order is setup properly.  See the link below for more information:

If you still have problems, post your .story file & we'll take a look.

Thanks, Brian. The triggers appear to be set up properly, so I have uploaded the .story file.

Did you submit a support case?  If so, what's the case number?

To make this work as expected, click the Gear icon for the GasMeteringSelected layer & uncheck "Hide other slide layers."

Let me know if you run into any additional problems.

Thanks, Brian. That worked. But I am curious why I needed to uncheck that option. I would assume that I still need to hide the other slide layers, just as I did in the other similar hotspot interactions?

There's probably a fancy explanation for it, but I just can't figure it out at the moment.  I think my brain is fried from the launch.  I'll send it over to Dev an see if they can explain it.  Either way, it looks like your set.

No worries. Thanks again. I'm having a really great time working with this tool!!!

I am experiencing a problem with a Layer that displays "Help" for the user.  The layer appears correctly if I launch the Story.HTML file from my desktop, but the Layer will not launch once the SCORM package is uploaded to the LMS.

I am testing the course on the SCORM Cloud. Any suggestions? 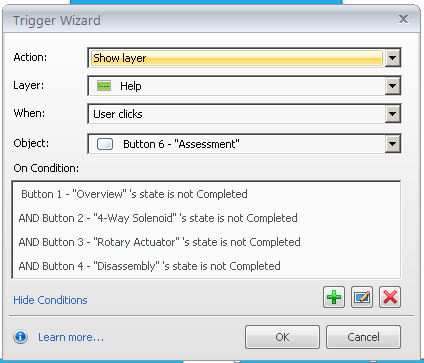