Is there any way to use a trigger to move an object to a specific point on a slide without using a motion path? I have an object that I want to trigger to move to multiple different areas on the slide, depending on the state of another object. Since the object may be starting from any one of these different positions, building it with motion paths means creating a motion path for each destination from each start position, and using conditional triggers. However, this gets very involved very quickly.

What I want is to be able to trigger moving object X to location Y, not dependent upon where object X starts from. Is this possible?

As far as I am aware, there is no way to move an object in the manner you want to without using a motion path. However, one option that may make your life easier, but this is dependent on how your various start and finish positions are set up, is the use of the Relative Start Point option for your motion paths. 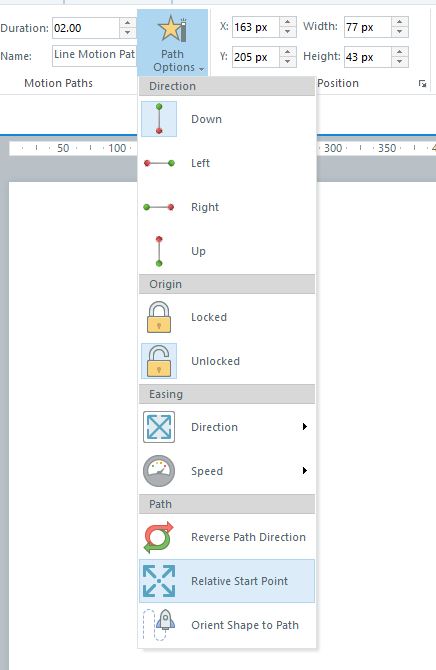 Suppose, for example, you have nine possible start / end positions for your object that are all equally spaced apart: 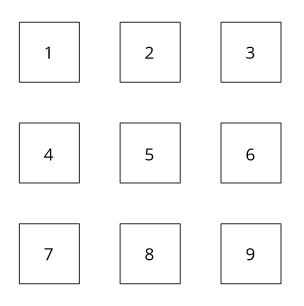 If you set up your object in Position 5, you then have eight possible motion paths for it to use in order to reach any of the other squares (up, down, left, right, top left, top right, bottom left and bottom right). If you set all your motion paths to use a Relative Start Point, you can then use the same set of motion paths irrespective of where your object actually starts.

Suppose, for example, that you start from Position 4 and wish to move to Position 1. In this case you simply use the same Up motion path as this will move the object one square up relative to its current position. If you start in position 1 and wish to move to Position 9, you then use the Bottom Right motion path twice (alternatively, you could also add eight more motion paths to your original object that move it two squares in each direction to cover those options).

I hope this makes sense, but if you have any other questions, just post them here.

If you have to see it moving, motion paths is the only way. If not, try using states.

This is helpful, and I appreciate that it reduces the number of motion paths required, but it still requires a huge number of triggers (I have 36 start/end points - I would love something that only required 36 triggers, but needing a trigger for each start-end combo requires over 1,200 triggers!).

Thank you for the thorough response, I will definitely be using this technique on other projects in the future!

Thanks for this suggestion - I have previously done it using states, and it looks like that may still be the way to go for now.

What I really want to do is both allow the user to drag and drop the same object onto drop targets around the screen, and have the object move to a specific location if the state of another object is changed - and unfortunately using states for the moving object doesn't work if the user can also change where that object is on the slide, because then the states, which are relative to the objects starting position, display in the wrong place when the object has been moved by the user. Unless there's a way to make the state a defined absolute position on the slide, rather than relative to the object's "normal" state position, this doesn't quite get me where I want.

Fully understand why you would not be wanting to create 1200 triggers, but it does raise the question of why you would want so many start / end options on one slide? Obviously I don't know exactly what you are trying to achieve, but is there any way to, for example, break down your options into smaller groups, which could then be placed on separate slides or separate layers? This might enable you to use less triggers or less states, depending on which method you use.

With regard to absolute positioning of states, you can achieve what I think you are after by setting up your initial object with all of the required states in its initial position. You then set up triggers to change the state of the object dependent on which target it is dropped on. Because the object will move to the target when it is dropped, the new state will occur at the new location. Don't set up the new states in each of the new locations as they will disappear off the slide when you drop your object ( this is because their new state will occur in a position relative to the position of the original object, which has now moved).

In the attached example, I have used a character and three drop targets. Depending on which target the character is dropped on, she changes state with a new pose. On target 1 she looks pensive, on target 2 she has hands on hips and on target 3 she has hands clasped beneath her chin.

Having dropped the character on a target, you can then drag the character over another target and you will see the change occur. Alternatively, you can click the Reset button and start again.

It's a lot of points; it's for a game-like interaction I am creating. It would not work to do across multiple slides.

I understand how to utilize the states the way you show, but as I said I don't want drag-and-drop to be the only method of movement (in fact, it's the secondary one).

I think I have figured out a way to mimic what I wanted close enough. I have also submitted a feature request to build a trigger to move an object to an absolute position regardless of starting point.

In case anyone else is looking for a way to do this, I have experimented with a few possible work-arounds and the best one I have found is this:

You can create a line motion path with the start and end points at the same point. Make sure to go into path options and lock the origin! This has the visual effect of immediately moving the object to the desired point without showing a motion path, and works no matter where on the slide the object started from.

Thanks for sharing Sally.

I have some training to do for a client about interactions in SL and how they can be achieved in different ways.  I've taken your file and instead of motion paths used states to get the same result even though it uses more triggers.

Yes, states is an option I've used before for this, but won't work in my currrent project, so I wanted a different option to use.

Thanks Sally I will use this technique for sure :)

For all that donot like motion paths and want to animate without it. It can be done. Easily in fact. As Storyline uses GSAP under its hood for all animation ( also the motion paths ) you can do the animation without any need for them. Do check my posts on GSAP and you will see.

And as GSAP supports all kinds of values... vw and vh too...you can animate without worry for any change of the viewport.