We are using articulate 360 in my company with three licenses since this year.

But since 3 weeks me and my collegue can not open any articulate 360 app anymore. After starting a articulate app the attached failure notice appears.

Do you have an idea what may couse this failure and how to get rid of it? We tried to uninstall and reinstall all apps and articulate 36o several times - with no success.

Articulate 360 doesn't open for me. I also try to open Storyline and it just spins saying that it's trying to sign in to Articulate 360 and nothing happens. Can you help with the issue?

Thanks for contacting our support team about this issue as well. I see that you've been working with Amlan.

Why does logging into Articulate 360 continue to be an issue?  It is hard enough trying to maintain the same productivity while working remotely. Now, Articulate throws up multiple roadblocks, of its own making, to make productivity even MORE of a challenge.

It has become PAINFULLY obvious that this punitive subscription model was not fully-vetted for corporate users, who routinely work behind firewalls and other filters, both on-site and remotely through VPNs. Adobe's Creative Cloud has been absolutely rock-solid and connected in the same span of time that Articulate 360 has stumbled multiple times . In the unlikely event I SHOULD lose connectivity, Adobe's Creative Suite of tools continue to function normally. Articulate's tools, on the other hand, refuse to launch.

A more-robust subscription model would provide additional diagnostic tools to troubleshoot connection issues. Or, the vendor would be smart enough this experiment is a failure and return to a  more-stable model which doesn't punish the users.

I'm also having the similar issue 'Open failure - There was an error opening Articulate 360 Desktop App'. Every update will give new problem to the software. This is really getting on my nerve. Please fix this ASAP as we payed for this monthly but always getting the same error on every update.

Thanks for contacting us and sharing that you're running into an issue as well, Fadzil.

I've opened a support case on your behalf so that you can work directly with one of our support engineers. You should be hearing from someone soon.

I'm having this issue, too. It's new today, and I also am getting "Articulate Peek 360 has stopped working" on signing into my computer (I haven't ever tried to open Peek). I often get an error that Storyline has stopped working and needs to close AFTER I have saved and closed a project. HELP!

Thanks for reaching out here and in a support case! I see that you discovered that the user profile on the computer was hidden, and unhiding it did the trick.

Great find and if there's anything else we can do to help, please let us know! 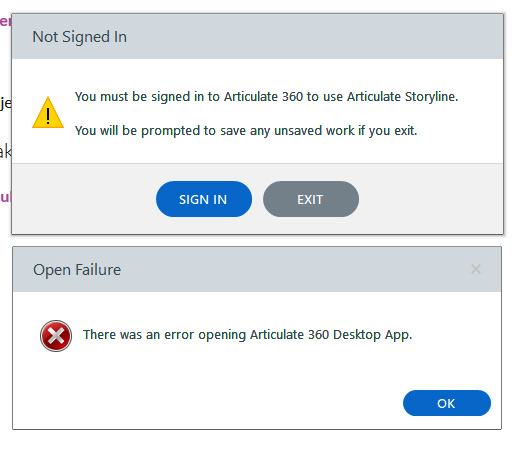 Just thinking: Earlier this week I was asked to update Windows 10 by Microsoft. Could it have something to do with some sort of incompability with Microsoft's latest update?

My main concern here and now is: How can I solve this problem so I can log in and continue working?

Thanks for letting us know what's going on and I'm sorry for the trouble.

After that, please restart the machine and then try signing in again.

Here are some other common solutions for sign-in issues.

Let me know if you see any improvements from there!

Thanks Leslie! I was having the same issue; followed these steps and was able to start it!!

Glad to hear it, Sharjeel! I appreciate you popping in to share and welcome to E-Learning Heroes :)

Can you not just post the fixes in a more transparent and easily accessible place? I am tired of combing these discussions, performing all of the "fixes," reaching out to support and then getting pushed to an engineer (who is not accessible 24/7). These are not new problems. They occur far too frequently and apologies and support cases do not suffice. Post the solutions. Post the cleanup apps. Finally, fix this stuff.

I see you've been able to connect with my teammate, Bang, on this issue, and were able to get back up and running and discuss our support process.

I appreciate the feedback you shared with him and will be sure to share your insight with our team.

I am having the same issue. I just submitted a case, and it said I should hear back in two business days. I will lose a significant amount of work in that time, which puts me in a very bad position with our client. How can I expedite the request?

Thanks for contacting us to share what you are experiencing and for letting us know that you were able to submit a support case as well.

I was able to find your case and see that Gerald has already responded to you with some assistance :)

Thanks, Leslie! Uninstalling and reinstalling worked--thanks so much for your help and quick response!

Awesome! I appreciate the update, Hilary :)