Restart layer timeline with a button

I have a slide with a comic book-like scene between two characters. There is no audio; the learners read callout text boxes to follow the conversation.

The base layer has some introductory information, followed by the conversation.

However, I want the learner to be able to replay the scene as many times as they want, and I cannot figure out how to replay the timeline on the Conversation layer.

Is there a way? I have tried to "show" the layer again (and set the layer properties to reset to initial state"), I've tried to pause and resume the timeline (yes, I know, but I was desperate!)

Does anyone have any suggestions?

Thanks for responding, Walt! I'm not sure what you mean. Why a blank layer? How is that different than just having the conversation layer?

In either case, I can't seem to restart any layer other than the base layer. How would I do that?

1. To restart a layer, you have to hide it, then show it.

2. Clicking the Replay Conversation button will show the conversation layer, but if the layer has not been hidden, it won't do anything, because the layer is already showing. If you make sure the layer is hidden before the user clicks the replay button, you don't need the other layer.

As Walt says you need to hide the layer before you show it (storyline will not show a layer that is alder showing the only thing it will do is move it up the Z order), the blank layer is a nice way to hide them all at the same time.

If the layer is not restarting you may ned to open the layer properties and set it to reset to initial state.

I have used this technique to restart a layer. It works well, except for one problem. When the layer restarts it plays the first audio file....will not play the second audio file on the timeline....and then plays the third audio file. The second audio file was recorded by someone else. I believe she recorded it directly into the slide. My audio files were imported from Audacity. I tried exporting her file and then reimporting it to see if that would fix the problem. So far the middle audio file still will not play when the layer restarts. There is just quiet time during that middle part of the timeline.

I just found that I have another slide that does the same thing when you restart the layer using the blank layer. The first and third audio files play but not the middle audio file. All Audio files were recorded in the same way...using Audacity...and imported into the slide.

Did you try a trigger to play the second audio when the first audio completes?

Works perfectly! I should have thought of that! Thanks!

This thread was very helpful. However, I am having trouble getting the timeline and audio to restart on my layer.

I added a blank layer as instructed above and my layer is set to reset to initial state when revisiting.

Hi there, Peyton! Can you share your .story file here so we can have a look?

Actually, I see it here! We'll have a look.

This issue referenced is in part covered by what I posted here.  Thanks for taking a look at it.

My second issue, which I was referring to above, has to do with playing, pausing and restarting a layer. As you can see on the attached file, when you click on the Pre-Arrival Case Manger button, it takes you to a layer. I added a pause, play and restart button for people wishing to listen to the audio and watch the timeline again. The pause and play button work fine. However, I cannot get this layer to restart.

I added a blank layer as recommended above but it doesn't restart the layer.

Thanks for sharing your slide! It looks like the "Play Media" and "Pause Media" triggers are getting in the way here. Fortunately, you don't need those triggers to achieve your goal!

On the Pre-Arrival Case Managers layer, remove the three play/pause media triggers shown below. Then, preview the slide and let me know if you're able to pause, play, and restart the timeline of the layer. 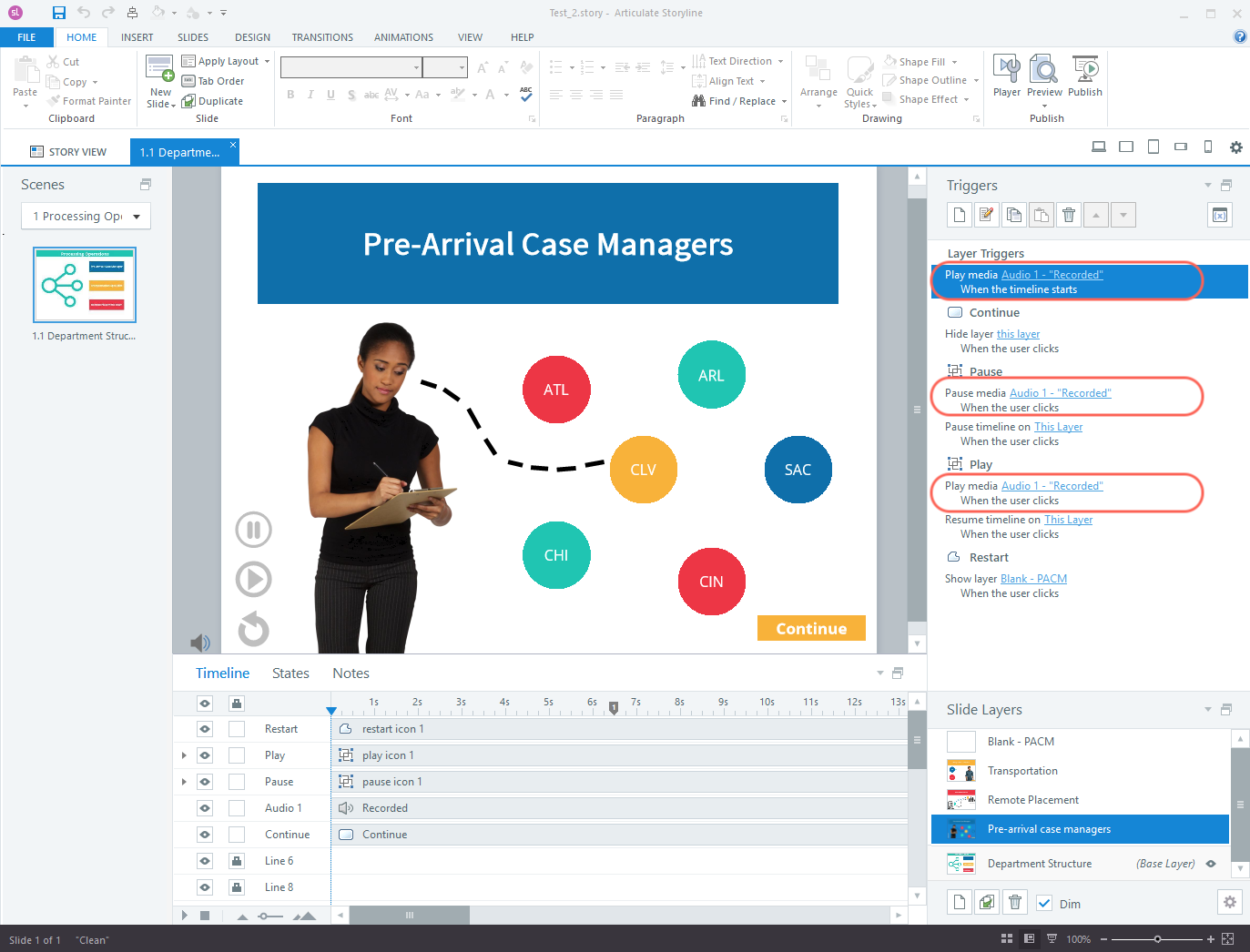 I noticed you had manual triggers to pause the audio on the base layer.

You can set the properties on the layers to pause the timeline on the base layer instead and then audio will resume when the layer is closed:

Thank you Leslie! This worked perfectly.

The replay button on the seek bar does not work on the base layer however. But I guess users can just use the seek bar to listen to it again. Do you have a solution to this?

I have a similar issue and can't find any answers.  I have optional audio, triggered with a variable at the beginning of my course - if someone wants help reading or has learning difficulties.

I then have slides with click and reveal icons.  Layers are set to reset to initial state, but if someone clicks on icon 2 mid way through icon 1's audio and then clicks back onto icon 1, it doesn't start from the beginning just carries on from where it was left off.

I see comments about triggers getting in the way, but I need these as not everyone will want audio, only those that have selected it at the beginning of the course.

Better to control the audio on layers, and set the layers to reset to initial state

Audio is controlled on layers.  As long as a variable has been changed at the beginning of the course (choosing audio on) the audio plays. i.e. play audio when timeline starts, if 'HEARING' is equal to true.

All layers are set to reset to initial state, but if someone clicks onto a new layer half way through, then back, the audio doesn't start from the beginning.

That is odd then, I would check you are on the latest update, they audio should just restart

yep, very frustrating.  I have a week before this course goes live and I can't find the answer anywhere :(

On latest version, no idea why it's doing it

For anyone stuck with this issue, I found the answer!

Make sure 'Hide other slide layers' is selected on all layers

Make sure 'Reset to initial state

' is selected on all layers

Most importantly (and most backward) you need to add a trigger that says:

Stop media # when user clicks outside (anything on that layer)

It seems Storyline hides the slides, so resets their timeline, but not the audio. You have to stop that manually.

Thanks for the update, Hannah and I'm happy you figured it out! If you hit any roadblocks again, please feel free to share your .story file here with us or send along to our Support Team! We're always happy to take a look and troubleshoot with you.