Skipping a scene ('pretest' slides) once pretest is taken.

Attached is a SL which contains Scene 1: Pre-test, Scene 2: Course Content, and Scene 3: Post-test. I wanted the pre and post test scores to be X/X correct rather than a %Score so I have created counters that accumulate into a TotalScore variable and this seems to be working as planned.

Now the problem. If a learner wants to review this section again, I want SL to evaluate if the learner has taken the pre-test (evidenced by score of 1-5 in TotalScore) and if so, skip the pretest slides and go directly to the content. I tried using a player trigger in scene 1 for this, but I think I'm missing something as when I hit replay the project while in Preview mode, it starts the pre-test again, even though the TotalScore variable should already have a score in it from the previous taking of the pre-test.

Any help is appreciated!

When I hit the replay button in preview, it does jump past the pretest.  Just to make sure....are you previewing the entire project, or just that scene?  If you preview just that preview scene, it will continue to jump to the pretest.

I do have one suggestion for your project....

Right now, you have your triggers set so that the variable increases when the user clicks the correct answer radio button.  The challenge is this....

What if the user clicks the correct radio button, and then chooses a different (incorrect) answer?

The variable will change, but yet they've got the answer wrong.  I've added a reference to your first slide so you can see this in action (see attached file).  If you click back and forth between true and false, the variable keeps increasing each time you click the false radio button.

Since you have each of these set up as Multiple Choice questions, I'd simply convert them into actual quiz questions so they're all set up with a submit button.  Then trigger the variable to adjust when the user clicks the submit button.  So, let's say that option #2 is the correct choice, your trigger would look something like this... 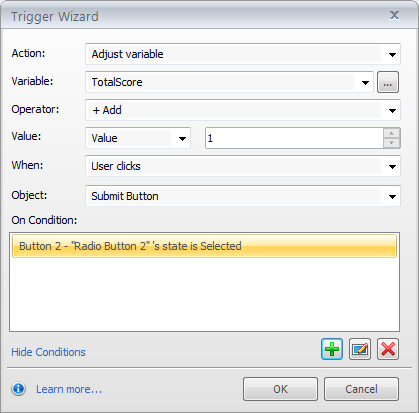 This will save you from having multiple triggers on each slide.

PS.  Make sure to have this trigger fire before the Submit Interaction trigger.

Wow! thank you so much for the great feedback on the variable, I was thinking it would accumulate based on clicking the next button but that doesn't make sense since the next button is not tied to the count variable. I will study your suggestion and story file closely and be back if I have any more questions about it.

Actually, what may have happened in the replay was that I initially had the slide trigger on the post test rather than the pre test scene. I discovered this when I went back to see what I had named my variable. I moved the skip to Scene 1 and thought I retested (by replaying the project, not just the scene) - but maybe I did not. If it worked as I described for you then that's great and what I wanted.