Not sure if anyone else has experienced this, but I had upgraded my SL2 SCORM packages to SL360 and overwrote them in Moodle (2.9.3). Nothing was changed with respect to the SL output ('Complete/Incomplete', LMS SCORM 1.2) and Moodle SCORM settings (Completion based on Learning objects and required status: 'Completed' .

I tested the packages and had no issues regarding grades, but within certain browsers (Firefox), the SCORM completion status would not trigger.  The Grade would be =1, but no completion checkmark appeared, which left any dependent restricted activities locked.

I tested in Chrome, IE and Edge where Grade AND completion were recorded.  In the middle of testing, I noticed that Moodle was reporting the SCORM as 'Completed' before the update, and 'Passed' after the update. 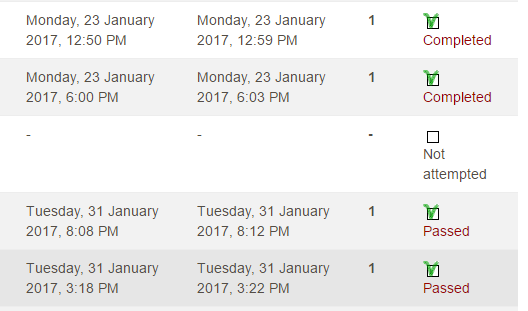 Anyway, my workaround was to add in Moodle "Required Status: 'Passed' and 'Completed'" so the completion tracking seems to be working properly again across all browsers.

Can anyone else confirm if this is an issue they have experienced with a 360 update? My confidence is a little shaken with respect to using 360 in Moodle.

I've often thought we should probably combine that setting in Moodle (completion status) - so that you just have one tickbox for "completed/passed" - because they both really mean the same thing  when dealing with "copmletion" and typically packages will report one or the other status type. I'd recommend you just tick both in Moodle when setting up activities so it doesn't matter how the SCORM is authored.

Thanks so much for chiming in here Dan - I certainly cannot speak on behalf of the users question, but with as many Moodle users as we have I would think we'd have heard about an overall issue :)

Thanks so much for the reply.  I haven't had this issue when loading a SL360 file into a new SCORM activity - the issue only occurred when I overwrote an old SL2 file with a 360 file.  I will certainly make sure to use both Passed and Completed statuses as a safeguard moving forward though.

I have the same problem. With the new Art360 I did not have active checking completed  while with the old version was ok.
The passed check is ok.
But I'm on the platform i have all the materials with ONLY the active check completed and replacing they DO NOT work anymore. Ultimately: if I put the check passed works ok with the check completed no.
Can you solve this problem? If I modify the moodle setting I LOSE ALL the recorded tracking. As the old Articulate worked, I do not understand why the new version should no longer work.

Hi Fabrizio.  Yes, this was the same issue I encountered.  Overwriting SL2 files with SL360 files may not be a solution.  Have you considered creating a new SCORM Moodle activity with the SL360 file and the new completion status?  You could keep but hide the SL2 version of the activity.  This will be my personal strategy moving forward as I update SCORM activities with SL360.

I just have to remember to adjust the rest of my lesson restrictions in Moodle to accommodate either the completion of the SL2 version or the SL360 version of the SCORM package.  :)

The SL360 files include some other elements in the published output than SL2 did, so the files and tracking may not be exactly the same which could cause some issues if you're trying to overwrite the course.

I'd agree with Heather, to create a new version and if you can hide the older version or make it no longer accessible to users that should at least keep your tracking data.

Thanks for the answers.
Yes I had thought of creating a new SCORM SL360 and hiding that SL2. Unfortunately, however, users who have already consulted the material are having to resubmit it again if they want to reconsider it. As there are blocks to continue if they have not finished a material they can not reconsider the material they want.
My disappointment is that saving and overwriting with the Passed check is ok, while Completed no and earlier versions were correct.
I had done this several times.
Thanks anyway for your help.

Sorry I couldn't offer more help Fabrizio! If they were authored with the same version, it would have worked seamlessly - but using different versions means that different files were created as a part of the output and caused the reporting differences you're seeing.

We are having this same issue.  our moodle is set to learning objects and complete a certain number of slides.  we have both passed and completed checked and about 10% of our users are having problems with moodle not marking it complete and it isn't consistent which browser they are using. Any suggestions or help are appreciated.

you haven't really provided enough information here for us to help much.

SCORM is inherently fragile - many things can cause problems.

For Moodle specifically - are you running a recent supported release?, Does this fail when a large number of users are accessing your site at the same time? - Do you have any 3rd party plugins/themes etc that might be interfering?

You might want to ask for help in the Moodle community forums, but please provide as much information as you can, what is shown in the scorm data in the lms for users that are not complete but are saying they have completed etc.

Hi there Melanie!  We have some tips for troubleshooting LMS issues as well.  Could you possibly have the same users who are not being marked as complete try the content from SCORM Cloud to compare if the course is reporting properly there?

I'm happy to give your course a test as well if you'd like to share your .story file here.

The files worked fine in SCORM cloud.  Our users are external users and we have no way of knowing what browser they are using.  we recommend not using google chrome.  This has been an issue that has plagued us since we went with scorm on August 1.  I'm unfortunately not a programmer.  We are using the newest moodle 3.3

I have attached the files and a snapshot of the publishing options and moodle options.  Any help or advice is appreciated.  We are working on contracting with some help but I work for state Government and things move to SLOW>>>

Hey Melanie! Thanks for letting us know that you've tested the content in SCORM Cloud and it's working well there. Did you share the above information within the Moodle forum as Dan recommended? They may be able to better assist you.

I'm unclear where that forum is located?  On articulate or moodle's site.

Hi Melanie - On Moodle's site. I cannot assist with Moodle support :) Dan pops in and helps within our forums with a lot of Moodle questions and we have many Moodle users, but ultimately it sounds like you need assistance with Moodle specifically.

yeah - best to ask for help in the forums on moodle.org - here's the SCORM forum:
https://moodle.org/mod/forum/view.php?id=1951

Please also include information in your moodle post if you are hosting your own Moodle site, if it has been tuned correctly with caching plugins etc. (or just quickly installed) - also information on the actual data that is shown in the user reports that show as incomplete but you are expecting them to have passed.