Sometimes my trigger works, and sometimes it doesn't

I have a 5-tabbed Storyline course. Each tab is a different color, and I have several triggers for each tab. I want the colored tabs not to change, but I want their text labels to have a different look once the tabs are visited. I also want the tabs to be clicked in order, so four of them have an initial state of Disabled.

Below is a picture of a few of the triggers I'm using. The first trigger enables the next tab; the second trigger enables the next text box; the third trigger marks the text box of the given tab as Visited; and the fourth trigger jumps to the first slide in the scene associated with the given tab. These are the same for all but the last tab, which needs only two of the four triggers. 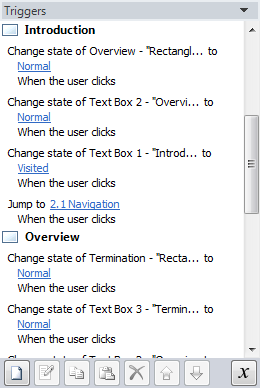 When I preview the project, sometimes things work exactly as planned; but sometimes the preview gets stuck on the third trigger and never jumps to the indicated slide. I have tried them in every possible order, but the result is always the same: Sometimes it works properly, and sometimes it doesn't.

What would cause this to happen, and how can I fix it?

You mentioned that it works sometimes and not others - and since it's inconsistent, I'd want to know more about your overall environment. Are you working on your Storyline files as described here:

I'd also suggest closing down other files or programs while working in Storyline in case it's an overall memory issue that could be contributing to the delay or the course getting stuck. Do you have any other computers or systems you could also try it on?

Thank you so much for your detailed reply!

I always work on my C: drive when developing in Storyline, and my paths are within the 260-character limit. However, I do have several other apps open all day -- particularly Outlook, which is a known resource hog -- but this has never caused that kind of problem in the past.

I actually decided to use a workaround. Namely, I saved both the text and the color tab as pictures, copied the text on to the color tab to create a new picture, and imported that into Storyline to replace the two separate items with just one picture. I did this for each of the five tabs, created new triggers, and now the triggers work all the time.

This was a weird one!

Thanks for confirming all those other items. I typically have Outlook open too while I'm working in Storyline, and have a pretty good set up in terms of my computer - but when I run into a large course that has difficulties, closing down everything else seems to always make a difference.

I'm glad you were able to figure out a method that worked for you in this scenario, and if you need additional help just let us know.