Tab Order does not focus on first item on next layer, but DOES on previous layer

My Set Up and Desired Behavior: I have a slide with a base layer and five additional layers. Tab Order is custom within each layer, but still has the basic set up of base layer stuff at the bottom, first extra layer above that, second above that, etc.

Problem: When I tab to the next layer using a custom navigation button, the tab order does not focus on the first item in the tab order of the new layer. Instead, when the new layer loads, the screen reader says "button" and I can't see where the focus is. Then if I tab one time, it says "Skip navigation. Press Enter to return to the slide." If I Press Enter, only then does it focus on the first item of the next, newly-loaded layer in the Tab Order. When I tab to the previous layer using a custom navigation button, it works just fine.

What I Think Is Happening: I believe for some reason, when the Tab Order moves to the next layer (above the current layer items), it is not jumping to the first item in the Tab Order, but just moves up one "notch," so it thinks it's actually right after the last tab item of the next slide. Clearly that's not what it should be doing. It works fine moving to previous slides because the previous slide items are directly below the current layer in the tab order. 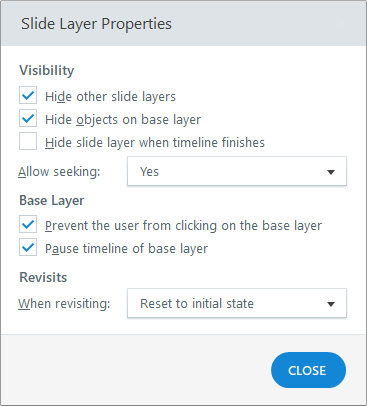 Thank you for including all those details! I can see that our team has logged this as a bug. It seems like when "Prevent the user from clicking the base layer" is checked the tab order isn't followed in a slide layer. Are you able to uncheck that for your course?

When we hear of a fix to this bug, we'll let you know in this discussion.

Thanks for the information, Lauren. I just tried unchecked that Layer Properties option, but it still does the same thing when moving to the next layer. Moving to the previous layer still works fine.

Has this bug been fixed? I'm finding the same issue with my module. I have 5 layers and no matter how I've set up the tab order, or slide properties, the first object tabbed to on a layer, is the "skip navigation" button, instead of the first button on that layer.

That being said, the keyboard only learner would either have to activate the skip nav button, or tab through all the player objects in order to get to the slide buttons. Frustrating that I can't get this to work and may have to bag the entire design.

I'll second Roberts comment that it works fine in reverse.

I was actually (finally) able to figure out how to get the layers to flow correctly. I’m not sure why I didn’t think of this before, but the default focus (tab) order is listed from the top layer down to the base layer. If you reverse the order (base layer at the top of the focus order) the tab order works correctly.

When you show a layer, it will tab to the first button on that layer, rather than to the skip nav.

I appreciate you sharing your insight!

We're still looking into this behavior, so I'll share your notes with the team for review and circle back with any new info.

I'm happy to return to this discussion with an update!

Today, we released Storyline 360 Update 50! Here are the features and fixes released in this update. You’ll see that the update includes a fix for the bug you reported:

Now all you need to do is update Storyline 360 in your Articulate 360 desktop app! Thank you for taking the time to report this bug to us.