I'd like to create a quiz in Storyline that allows for multiple retakes.  That's no problem.  However, we have narration that we'd like to accompany the results slides in different scenarios:

I haven't found the function to set different passing scores, which I assume is what I'd need in order to set multiple results slides for pass and multiple for fail.  Any suggestions?

I was able to do what you describe on the results page.  I promarily focused on the Success and Failure layers.

First, record the audio you need.  You will need one for possible score:

You did not Pass

You will also need to duplicate these for each attempt

This is the second attempt and you achieved mastery

This is the second attempt and you barey passed

Think about how many of these you need, at some point you wil have to stop counting.

Then I created a variable called attempts initially set to zero.  On the base layer the variable Adds 1 when the user clicks the Retry Quiz button.

Then I created triggers for the success layer: 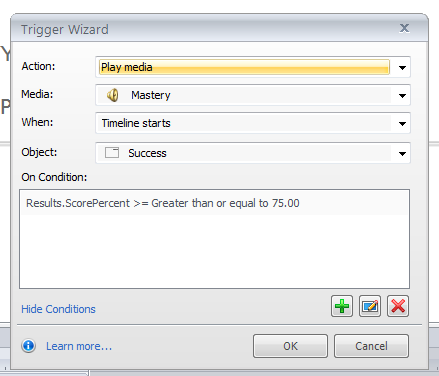 I created a similar trigger for just barely passing, except the score is below the threshold

Keep repeating them until you account for all your attempts and pass combinations.

The failure layer is easier since there are only audio combinations for failure and attempts.

From what I can tell, you will need gobs of testing to make sure it works in almost every concevable combination.  It might be eacier to use an on-screen attempt meter that would show the number of attempts.  It would certainly simplify things.