Some time ago I had an idea for a course that involved a spinning wheel with 14 options, to create some randomness in the path of the learner’s journey. I quickly changed my mind about that design but I got a little obsessed with figuring out how to get a spinning wheel to randomly spin, while avoiding landing on the same number more than once.

You can see the result here.

Please don’t judge my rudimentary graphics, my focus was on figuring out the interaction. I built this originally about a year ago so had to refresh myself in explaining it, hopefully I’ve got it right!

The variable references and Layer Markers on the main screen demonstrate what is happening. You can see that the jump to the layer is immediate, because the spin animation happens on the layer. You might notice that the ‘RandNum’ and ‘NumAdj’ are always the same because the triggers occur very quickly. I did find on my older dying computer than you could see ‘NumAdj’ flicking about while it kept generating new numbers looking for a valid one. Particularly as most numbers were out of play it could take a while – a few seconds - to tick over to find an unused number…after all it’s random, which means you can roll the same numbers over and over again. I’m not seeing that delay at all now so I guess that was simply my overworked older computer.

The spin effect is simply on the numbered layers, a 2.75 second spin animation. It would be super cool to actually have numbers on the different pie wedges and have it land on the appropriate wedge. I tried that initially, so that the wheel picture on the layer would land at the correct position, but it looked wrong because it jumped suddenly when you got to the layer, so I stopped trying to solve that visual puzzle.

Note that I would anticipate the next step of this interaction would be that on each spin layer (after a short delay so the user sees the result) you would jump over to a slide that would reveal the ‘prize’ (chapter, activity, points, quiz question, whatever) related to that particular spin. When that is complete the learner would be sent back to the spinning wheel slide to spin again.
I hope you find this helpful and would be happy to hear any suggestions for refinement, and will try to answer any questions.

This is super cool! Great work, Miriam :) And thanks so much for sharing not only your file but also your explanations with the community. I'm sure people will love this! :)

Nice work Miriam. Having built something similar recently I know how challenging this type of build can be!

Thanks for sharing Miriam. The layers are quick to appear and it's a very neat animation !

I've tried the demo and it freezed after 12 "true" values (see the picture). It's not a criticism at all, but I've been working on a similar project  (with 2 die rolling to give randomly access to 10 questions) and my project also freezes after some tries.

Have you encountered the same problem or is it linked with my computer ? I'm using Chrome. 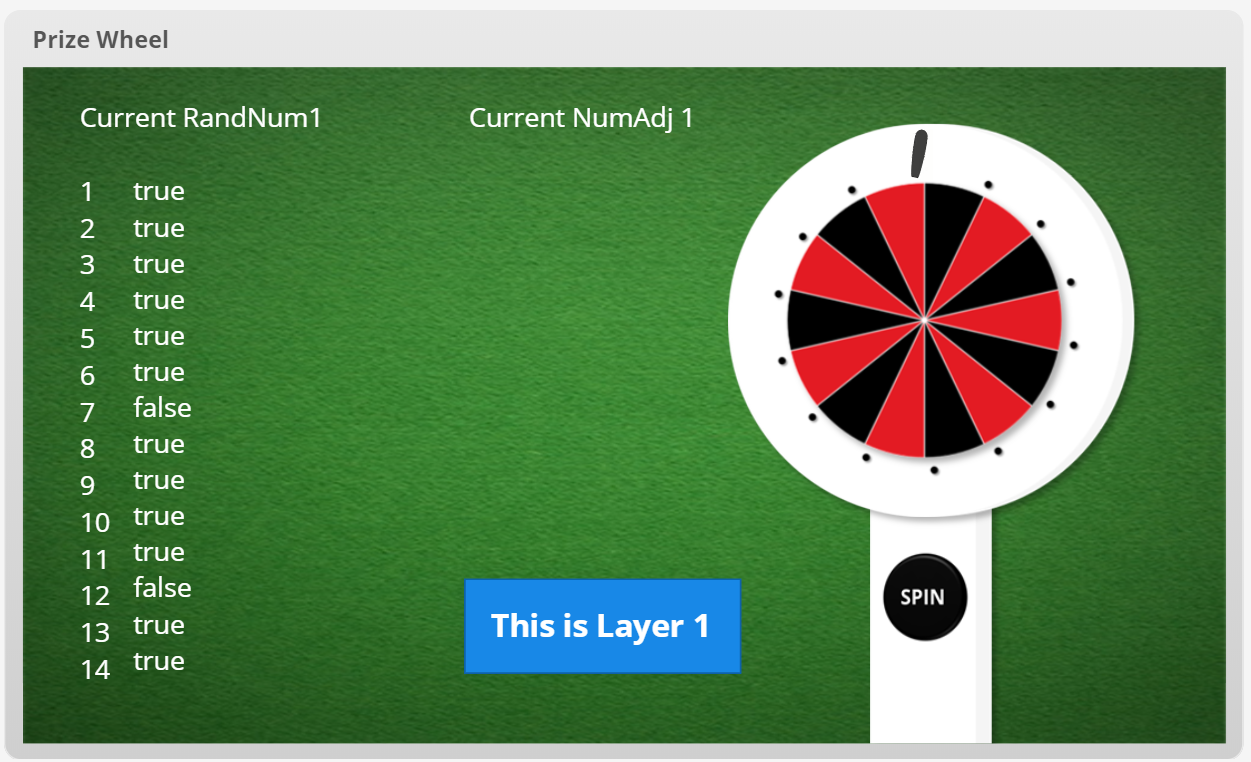