After updating Presenter 360 this morning I seem to have lost the ability to restrict navigation.  There is no restricted navigation in the preview or when published.  I tested with a course that was published yesterday with no issues (i.e. navigation worked as expected).

Additionally, the keyboard navigation (arrow keys) is still not working when published with flash.  Is there a estimated date when this feature will be fixed?  Since keyboard shortcuts are listed as a supported feature in flash, my expectation is that this issue will be resolved in the next update as there have already been 2 updates since this issue was identified as a bug via Articulate support.  This bug should take priority over new features.

Hi there! Thanks so much for bringing this to our attention. We're also seeing that Restricted Navigation isn't working correctly in Presenter 360 Update 8, and we're looking into it now. I'll let you know as soon as I get an update!

As for keyboard navigation with arrow keys, that is working correctly in Presenter 360 Update 8. You'll want to first use the Tab key to bring the focus (yellow outline) to the Next button. Then press the right arrow key. 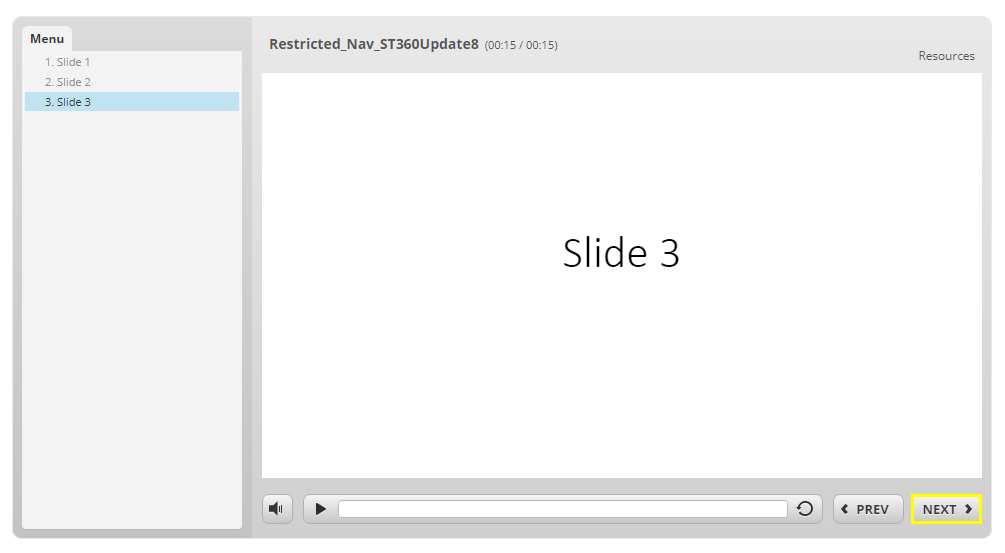 I hope that clarifies things! And thanks again for giving us a head's up. I'll pop back in when I have more to share!

The arrow key navigation with flash is still not working properly for me with Update 8.  With the Next Button in focus, I can activate the buttons (Next or Prev) by hitting Enter on the keyboard, but the arrow keys have no function.   I have tested it locally (with the presentation_flash.html file) on IE 11.0.45.

Additionally, I have to disagree with the inclusion of the Tab Button and still calling it keyboard navigation.  It is not intuitive for trainees and non-standard for any other similar software. For the current course I am working on, a trainee will have to hit the Tab button 14 times before bringing the focus to the Next button.  As soon as you have content on your slides, the use of the Tab Button becomes unacceptable.

If you're using Free Navigation, you can use the Right Arrow key to jump to the next slide without tabbing first. Here's a published sample file with Free Navigation for you to test.

I apologize for the confusion, and I hope that clears things up!

Both files you sent appear to be html.....my issue is with flash.

Both files you sent work identically (no restricted navigation).  However, I do need the flash functionality.

Ah, thanks for clarifying that! Now I see what you're describing. To summarize, it looks like we've got two different bugs happening here:

Again, I really appreciate you bringing this up here, and I'm sorry this isn't working correctly since the latest update. Rest assured our team is on it, and I'll send you an update as soon as I get more information. ☺️

Thank you for your quick replies. Just to clarify for your team, the loss of restricted navigation is a new Update 8 issue, however, the arrow keyboard navigation issue has been around for longer (Build 8.6.11979.0 or earlier).

Thank you! I'll notify you as soon as there's an update.

Great news!  We just released another update for Articulate 360, and included a few important fixes and new features that you'll see in the release notes here.

The release included a fix for this issue: Restricted navigation no longer works in Presenter 360 Update 8 Flash and HTML5.

Simply install the latest update and republish your file to take advantage of this fix. Let me know if you have any questions!

Do you have any update on the keyboard navigation bug for flash?

Hey there-- thanks for checking in on that!

No updates for the right arrow key not jumping to the next slide issue yet, but we've tagged this thread in the report. As soon as we have any news, you'll be notified immediately!

And just to make sure- did the latest update take care of the other issue with restricted navigation for you?

The restricted navigation works for flash, but has not been corrected for html5.

Currently, Presenter 360 is not usable for me.  I'm not impressed that I am paying for a product that is sitting unused on my desktop.

I need both features to work for either html5 or flash.

I wanted to confirm if you were still having issues with restricted navigation alone in HTML5 or how the Right arrow key jumps to next slide even with Restricted Navigation in HTML5.

The latter is still an option issue with our team but as Alyssa mentioned earlier we did release a fix for "Restricted navigation no longer works in Presenter 360 Update 8 Flash and HTML5." It was part of a hotfix that came out for Update 8, so you may need to check for updates again and install it.

If you have a course that you've opened using the latest update and it's still not working, could you get us a copy of your Presenter package? I see you have an earlier case for the arrow key/restricted navigation issue - please feel free to respond there if you need us to take a look!