Support says it's a bug. But I don't understand why isn't everyone complaining about blurry images here? I can't believe hundreds of users are suffering in silence, so am I the only one?

Diarmaid you did argue compellingly that Articulate should "get things fixed first, new features later". Really appreciate your stellar contribution to the thread/issue. I did take it to Articulate's CEO Lucy Suros, on LinkedIn and get a reply from her...see below 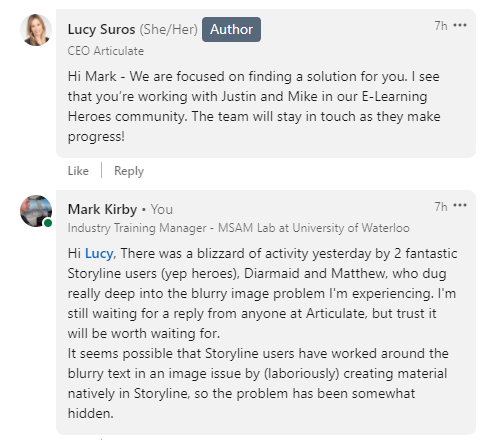 Wow. I'm blushing here. I wouldn't exactly call myself a hero but if it gives me an excuse to keep wearing my underwear over spandex with a cape then... uh... wrong forum...

Matt's the real hero. I was just procrastinating from doing the work I was supposed to be doing while everyone else is still on holiday.

I can't help but notice that the screengrabs you posted are really blurry. Have we considered that maybe we all need glasses?

Really appreciate your insights, as well as the sense of humour from the other side of our planet! Laughter is good medicine. 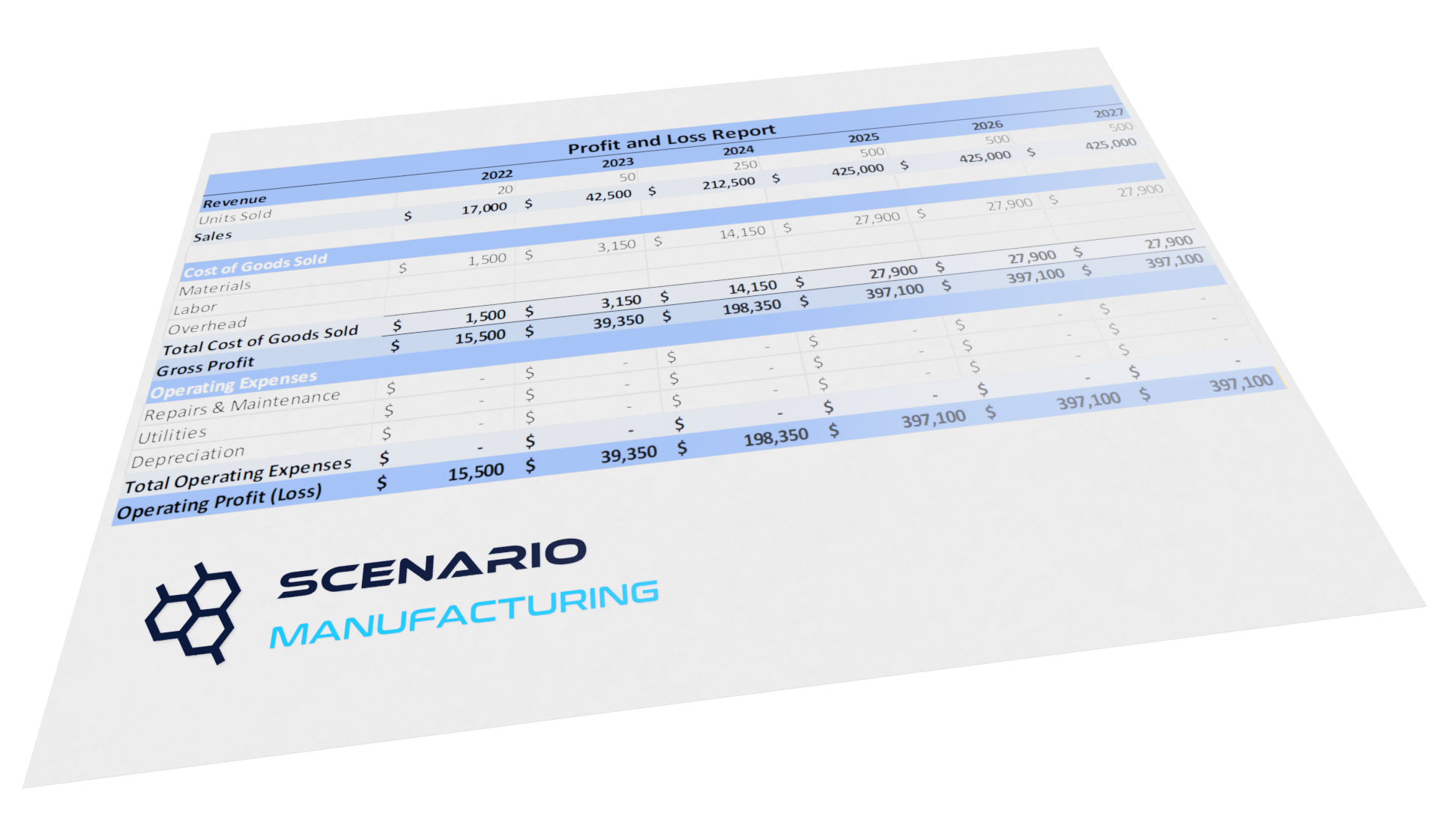 Part of a branching scenario, with a convoluted workflow - a random number in Storyline (1,2 or3) to select different sales vs time history, then using an Excel spreadsheet, with a linked picture to save output as an image, which is then used as a decal in Fusion360 to give me the illusion of a P&L sheet (12 different sheets depending on the scenario choices). Talk about a procrastination runway, lol.

OK so when I create learning, I create it with the thought in mind that my 80 year old father would be able to understand a topic or process without ever having been exposed. I simplify process verbiage and add visuals both animated and static.

NOW, I'm going to ask you all, that are clearly cerebral folks to bare with me for a second.

You talk about using SVG's. Is there an easy way to help me understand why JPEG's or PNG's are not used? When I searched for an answer, it's because I use JPEG's and PNG's. Seems like the issues happen with all of these.

Just making sure I'm not still living in the stone age chiseling on a stone tablet here.

Thanks in advance folks!

I always thought that the blend modes were broken, however what I think they are doing isn't what I expected them to do.

You have to choose a colour, and they behave similar to the same options in photoshop if you had a layer of solid colour (the colour you selected) over the top of your image.

Although not 100% identical to the photoshop output they are analogous. Just not what I expected them to do I expected the image would be blended with whatever was below.

I too want to use the easiest image format (like jpeg or png), so the ONLY reason I was looking at SVG was that ALL my images are blurry when published in Storyline. The blur only really shows up (horribly) when image has text in it (which is maybe why there isn't more of an outcry, as perhaps users typically add text natively inside Storyline on top of an image as a time consuming work around).  Diarmaid and Matthew are clearly much more expert in image formats than I am. I am an engineer and just want my images to appear on screen without massive degradation because Storyline is doing something to them.

That sir is a clean explanation and much appreciated. Agreed that the text is blurry, however I still feel like the images aren't as crisp as they can be. Please see the two attachments. These are an example of one of my sons figures. PPT is cleaner overall as compared to SL360. To me it should just be that simple.

Also and again just a simple mind thought. Once an image is captured, even if it has text, it transitions from layers of an onion, to a flat picture of an onion. In my mind, the text then becomes a image. It's no longer text.

Yes the PPT image is crisp and SL360 image is much worse.

I reported this issue in summer of 2021 and tried for a few months to get it resolved to no avail. I gave up and just do the best I can. Sure would be nice if SL fixed this basic issue.

Likewise I reported it months ago, and got nowhere. This is why I resorted to asking for help from their CEO on LinkedIn earlier this week, as the community has suffered largely in silence (or within our own echo chamber anyway).

I had a very long neanderthal-man-splain written about the differences in file formats and the pros and cons but a power outage wiped it before I could hit send. Which I'm kind of glad. I probably went way overboard.

JPEGS are predominantly used online because it is a 'lossy' compression file type that allows one to scrunch down the pixels to create smaller file sizes. This used to be important back in the early days of the Intertubes (but also again now with mobile data charges). The downside is the more the image is compressed the more pixellated it looks with things called 'artefacts' appearing around the edges of details. The trade-off is getting the happy medium between image quality and file size.

GIFs were/are predominantly used for flat graphic images, such as logos, illustrations, etc, due to its file capabilities of eliminating unnecessary pixel information (basically colour - the 'flatter' the colour (no gradients, shadows, etc) the less colour used, the smaller the file size. Ideal for icons. Also, the file format allowed for transparency and animations making it the de-facto choice for spicing up static pages/slides.

PNGs are the cool kids on the block cos they can (theoretically) do anything, but their primary use is that they are way better at handling transparency than GIFs. File sizes, in general, are slightly larger than equivalent JPEGs (much more so if transparency is included). Use only if transparency is needed.

The downside to all these formats is that if the bitmaps are enlarged or scaled upwards, they lose their sharpness and become blurry or 'soft'. The bigger the scale upwards the worse the effect.

Vectors use mathematical magic to display the information. Vectors are points (uh, in space) and vector lines um... join together creating shapes. The more vector points, the more shapes, the more 'complicated' the image. Sort of... There are many different Vector formats out there, such as WMF, EMF, EPS, the KLF, and SVG each with their own 'best use' advantages and disadvantages. I have never gotten an EMF to work for me. Ever. I don't know why it exists.

SVGs are known as Scalable Vector Graphics, and are the super cool new thing (they have been around for decades) and offer uh, scalable... vector... graphics to be used in your site/slide/artwork. The trouble is, Storyline is really behind the curveball (is that a phrase?) on this and its implementation is a bit below par. It should allow us the import of SVGs as images but then offer the flexibility of being treated as 'shapes' within Storyline to allow tweaking or editing of strokes, fills, transparencies, etc. It kind of worked with the Powerpoint workaround but Articulate have broken that official 'hack'.

SVGs should replace any instance of a static GIF used in the past. Any logos that were transparent GIFs or PNGs probably should be upgraded to SVGs (unless it's a mad logo with rainbow gradients and drop shadows everywhere). That's the short answer, really.

Here's a link to a demo I mocked up attempting to show the difference in image quality of the various file formats. But for some reason, my Photoshop seems to be creating 300dpi images that look the exact same as 72dpi images and I don't know why.

You should be clearly able to see the relevant image degradation of the GIF format compared to the others and also how SVGs scale beautifully.

Uh, ok, that still wasn't short. Apologies to everyone. I really should be doing something else but I don't want to.

That was flippin hilarious!  And in a case like this not at all too verbose. The explanations are great and I can now tell my 23 year old son and 25 year old daughter that a smart man implied I was a "cool kid on the block" cuz I use PNGs (My son gets ticked when I call them pings. I do it just to annoy him).

At any rate, thanks a bunch for the info and I promise to use it responsibly!

We continue with our bonhommie while I think that's Rome on fire in the background (but I can't see clearly...)  - are you watching this Lucy Suros?

Nope...I am constantly here and asking for help with this issue!!  This is HUGE!

I am now over a week late in completing a project and have spent almost this entire week trying to get storyline images NOT look blurry.  I finally switched to PhotoShop to do the image saving in...and same issue.

The issue is NOT that we aren't using the same size image...or that we are saving it as a jpg and losing quality..i have been thru EVERY POSSIBLE ISSUE and even saved the screenshots in MS Word where they look just fine.  The issue is a STORYLINE one.

Can someone please answer our question and try to help us? I now have to work the entire weekend because I just spent a week trying to get images to show up clear!

Time to post this on LinkedIn I think because we seem to have no voice here? Lucy Suros (CEO) said we would get help, but no solution is in sight.

I am so frustrated and hate to be the loud one - I am always pretty content working with what I have to work with....but this is just unacceptable.  I have to meet with my boss on Monday and try to explain why this is okay.  I even just tried the screenshot feature within Storyline and even those images are blurry.

I am ready to get a 30-day subscription to Captivate and just crank it out there at this point.

I want to reiterate what Michael mentioned a few days ago: this is not the expected behavior, and we are actively investigating the issue.

Based on the support cases received through this thread, there are multiple scenarios discussed here (SVGs, screenshots from third-party apps, images created in Photoshop, etc.), which might require different fixes.

If you haven’t yet, we encourage you to submit a sample project where you’re experiencing the loss of quality in images to our support team, so it can help us in our investigation.

We’ll keep everyone posted as we know more.

There is just 1 scenario here - images are blurry when published, end of story. You don't need more sample projects. You have replicated the problem going back at least 2 months (Case #03001137) - so this kind of "reply" really doesn't help us.

When an image is clear in Word, PowerPoint, SnagIt and other applications, but blurry in Storyline, me thinks Storyline has an issue.

Based on the support cases received through this thread, there are multiple scenarios discussed here (SVGs, screenshots from third-party apps, images created in Photoshop, etc.), which might require different fixes.

Another thing is you might want to consider is what we had for breakfast, what star sign we were born under and whether or not our monitors are calibrated to an exact specification when we created the image files.