I am running into some trouble in the design of an online DISC self-assessment. After ranking a series of character qualities, I have set up the scores to be displayed on a rose with four quadrants. These quadrants are built by objects with various states, containing differently sized pie-shaped objects and displayed percentages. These seem to display correctly on the canvas, but the percentages are displayed too far to the left in preview mode (see attachment). I'm lost as to why this is occurring.

I've also attached the story file for any helpful community members to have a look at.

Did you happen to change the size of the parent object containing all of the states after you'd added the states?

I've seen states misbehave when the parent object has been resized when it has states inside it.

If this is what you've done I haven't personally found a way to reverse the problem, other than to manually move everything in to the correct position again.

Quickly checked it and apparently something wrong in the states with the pies and the percentages. When i go onto that page and select all layers...i notice several textboxes/selected elements in the selection to the left as seen in your screenshot. Didnot find (yet) what caused that, gonna check that tomorrow.

As seen in this screenshot...

I checked the course and found out that somehow the textboxes got aligned wrong.  I found it hard to reset them and reposition them ok so at the end i found that the pies are at the correct position. Only the textboxes are not.

So i removed a few textboxes and added a new textbox outside of the states that i wanted to fill with variables. I didnot remove all textboxes from the states...thats up to you...too much work for me for now ;-)

So filling the new textboxes with a variable worked fine ( button set State ). Next i discovered your variables (STEADINESS,INFLUENCE etc. ) were Number Variables. Mine were Strings... and as yours were needed to show the correct state of the pie i didnot want to change that ( too much work again ;-) so i had to figure out a way to convert Num vars to String vars in Storyline.

Couldnot quickly figure that out, so i jumped to a solution i knew would work. Use Javascript to get the variables and pass needed values back to Storyline.

Added a trigger to Execute Javascript on the start of the timeline:

And when publishing and reviewing it works fine now.

So what you still need to do now is...
-remove all textboxes from the 4 pie chart states
-position my textboxes with variables properly ( Text Box 1 t/m 4 )

Thats it, then it works as intended.

That worked like a charm, Math! Thanks so much for taking the time to investigate this and engineering a solution. Really appreciate it. 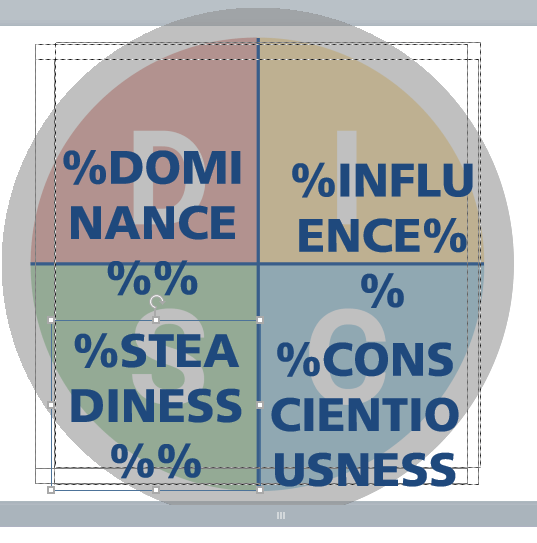 On second inspection I think your solution (neither with nor without Java) achieves what I would like completely. Using the percentage variable instead of the states seems to lead to percentages that don't correspond: in other words, the four quadrants no longer add up to 100%  together.

This seems to be the case due to the fact that the amount of points in the variable does not run parallel with the displayed percentage:

Any bright ideas on how to fix this?

Although im not 100% sure...first thing im thinking about is the rounding Storyline does internally. If you check in the community you find 2 ways to prevent this rounding of decimals. Using Javascript for all calculations...then you can when done send it as a text variable to Storyline.. or use multiplication to prevent rounding... say 1.1904 gets rounded by Storyline to 1 you can tackle that by at first multiplying it by 10000 so you get a number of 11904... and then when displaying it in a text variable dividing the value by 10000 so you get 1.1904

I would have to check the Story though to be sure this is the issue at hand.