Can you share a sample file? Doesn't need to be the real thing. Just insert a small video file and add similar content. Then we can see what you did.

It should work. Here's a quick demo and the source file.

Sure, I can do that!  In the meantime, seeing a similar request with layers in another post (http://community.articulate.com/forums/t/39895.aspx) I tried using the layers in the manner that Kevin suggested.  Still nothing...the video plays happily along, with no text box ("SBAR") popping up at all.  I attached a screenshot of my settings.  I'll post a video file shortly.  Thanks! 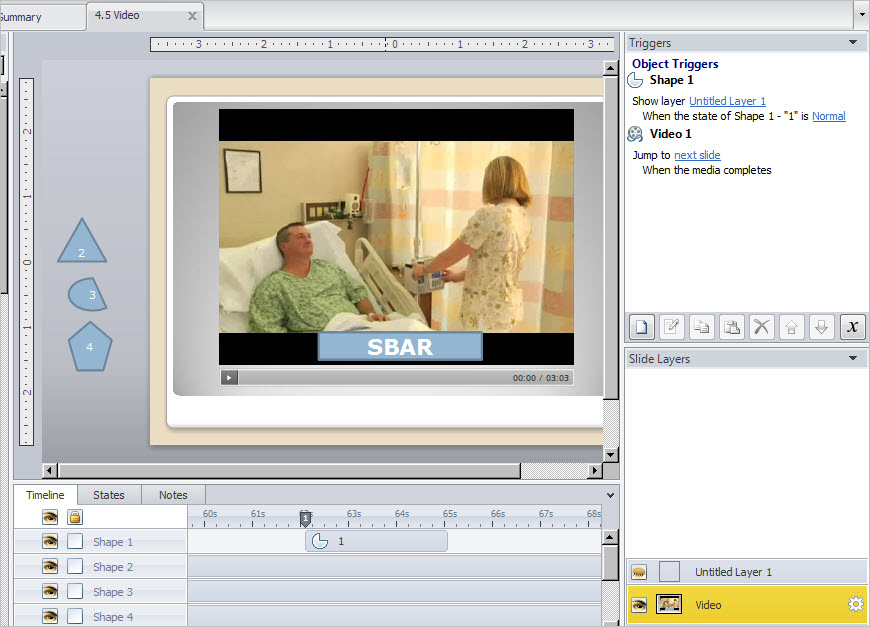 Oh, goodness, I deleted the layers and shapes and went to do a screen capture of the video with the text boxes not popping in, and guess what, the text boxes popped in.  *HOORAY*  Just like when I take my car to the mechanic...everything works fine when someone else is watching.

Must have been helped by the fact that my mood went up by 100% after seeing that adorable video of hamsters playing jazz instruments!  Thanks, Tom!

Thanks Jennifer for the update and I'm glad that everything is working as you need now. If you come across the issue again, please let us know!

Hi, I am also trying to  sync up 2 text boxes to show for about 4 seconds each, layered over a 6-minute video in a Storyline 2 slide but using the shapes and the layers didn't work for me. Any another suggestion? Thanks!!!

Would you be able to simply utilize the timeline in order to have the text appear when you would like as shown below:

Thank you Leslie. I will try your suggestion today. Viviana

I had a similar problem while testing the other day. I've embedded a live video stream into SL, but my popup layers come up behind the video instead of on top of it. I'll keep working on it and post a sample.

Is it a web object you've embedded?In Articulate Storyline 2, you can layer slide content on top of website videos and web objects. This layering will be maintained in your published output. However, when a learner hovers over the embedded web content, it'll temporarily move to the topmost layer, which may cover other objects on the slide. As soon as the learner moves their mouse so they're no longer hovering over the web content, it'll return to its original position behind other objects on the slide.

Thanks Ashley, I think you've identified the problem. Yes, my popup box is smaller than the embedded video, and is meant to be clicked upon, so when the user moves over the video to get to the box, the box is hidden. If this is the designed behavior, I will just re-think my layout and use a static notification area which does not overlap any of my embedded objects. Thanks again!

Yup - sounds like you're running into issues with the designed set up so you'll want to use a different behavior as you mentioned. Let us know if you need anything else!

Now that you mention it :) , could you address this other question I posted this morning? This is a big one for us: https://community.articulate.com/discussions/articulate-storyline/sl2-and-database-access

Looks like Leslie helped you out there - and it's not something we can support so hopefully the community is able to assist.

If i drag the slider then the text over the video is not displayed, where as it should be displayed as it is shown with the cue point .

Hi, Kimaya -- Thanks for reaching out and sorry to hear of your troubles! Do you happen to have a file that you would be able to share here so we can take a closer look at what your are experiencing?

I'm trying to do something similar - have text boxes pop up at certain intervals while a video plays. When i preview, it works perfectly. When I publish as a video, only a still of the video comes up while the text boxes pop up in time. How do I get the video to run with the text boxes popping up? I tried comparing to the hamster video but not sure wht I'm doing wrong. The video is an mp4 and created in Replay - Help!

So sorry about that, Liz. Our team is working through a problem where Replay videos inserted into Storyline 360 then published as a video will render a still image, and it sounds like that's exactly what you're seeing.

As soon as we have a fix for this in place, we'll let you know. Thanks for reaching out to us!

Do you know when this fix will be implemented? It's easier to edit videos in Replay than Storyline. Could you suggest a work around? I need to create a video that has the video of the recorded screen with pop-ups playing simultaneously.

It looks our team is doing some final testing on this, so hopefully, it'll make our next Storyline 360 update. We'll let you know here once it's ready.

We just released another update for Articulate 360, and included a few important fixes and new features that you'll see in the release notes here.

The item you'll be interested in is how it fixed an issue where Replay videos inserted into Storyline 360 then published as a video, will produce videos that has a still image.

Just launch the Articulate 360 desktop app on your computer and click the Update button for each application. Details here.

Please let us know if you have any questions, either here or by reaching out to our Support Engineers directly.

I see this is an old thread and I'm a little embarrassed to admit this, but in the spirit of sharing learning from failure:

Another possibility relates to slide timing vs video timing. I was pulling my hair out in frustration until I was realized I was expecting my SLIDE timing to be the same as my VIDEO timing when they operate independently from each other.  ::smacks forehead::

For example, I had a text box pop up 42 seconds in on the slide timing to highlight something that occurs within the video at that time. I used the playbar on the video when previewing the scene to skip ahead 42 seconds into the VIDEO, expecting my text box to appear, and it didn't until the SLIDE had run for 42 seconds.