How do I jumpURL into the same window?

One question and one continued frustration.

Question:  How do I make the JumpURL jump into the same window so it doesn't open a new window?

Second, is a continued frustration.  I went back into my former ch. 10 which I had published before with

no problem. Now after I open it and publish it bombs with no "Success" screen yet I have no idea why

it bombs.  This has been a game stopper for me and I think hugely needs to be addressed.  Things will

preview fine but the publishing will go through all the slides but then not produce the story.html that I need.

When you add a Jump to URL/file trigger there is an option to allow it to open within the current window or new window: 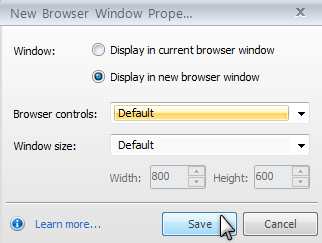 In regards to the course you're trying to publish again, did you change anything in regards to the Storyline file that could have impacted the publishing? You'll also want to make sure you're editing your files and publishing to a local drive.

On that URLJump sorry I should have looked at that more, there it is right in front

of my face.  Thanks for dealing with the obvious and helping me out!

On the failure to publish.  No I'm always publishing to a local drive and it previews

and then it wouldn't.  I had trouble like that before and started splitting up my stories

over 300 slides (ca. 195 megs) that's when I start having trouble and because there is

no error I have no idea how to fix it or where to look.  It was a game stopper until I

went to the breaking up my stories (wish you could link story to story better).  Oh well

No worries on missing the Jump to URL - it happens to all of us.

I've heard different users talk about if there is a limit to file size or number of slides, and although I've seen no official limit or an amount which seems to "break" Storyline, if there is a media heavy course that is always going to draw on your resources a lot more. I'm glad you were able to update and get some more memory to your machine and that should help - but if you continue to experience difficulty please feel free to let us know here or you can always connect with our Support engineers.