I'm experiencing a strange issue with text rendering of animated text in Storyline 360.

In my previewed or published output though, there is a difference between static text and animated text. Animated text goes slightly fuzzy in appearance and doesn't look the same as static text. See attachment B. 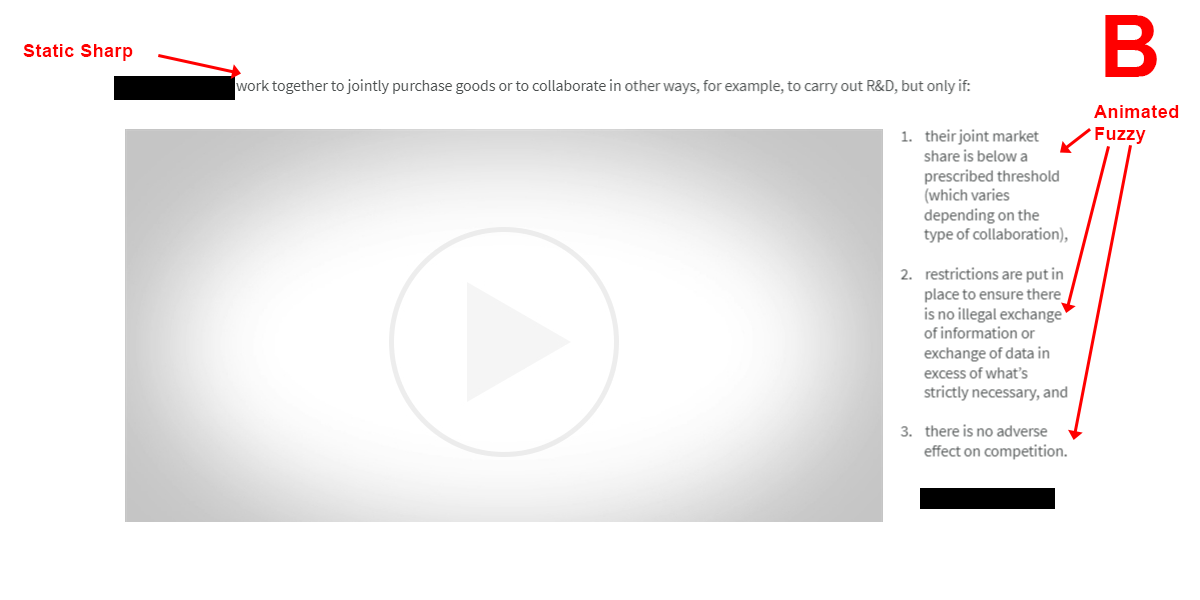 To confuse this further, a large block of animated text is sometimes sharp at the beginning of the text block, but fuzzy towards the end. Attachment A shows this. 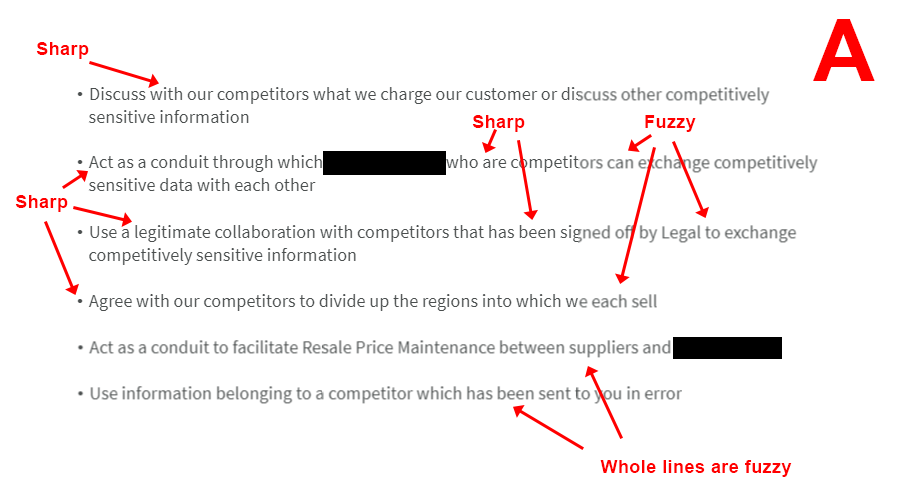 The attachments are the full-size versions of the screenshots above that show the issue more clearly.
Is there a setting I need to tick to render animated text differently? I'm using the same font, size & weight, but it isn't consistent when published.

Thanks for contacting us to share what you are experiencing in your project. It does sound similar to an issue we have reported to our team.

Do you know what version of Storyline you're using?

You can check by going to:
Help > About Articulate Storyline

We have two workarounds currently listed:

Hi Leslie, thanks for the response.

It's not feasible for me to roll back to update 35 as I'm using features that are only present in the later versions.

Happy that you've reported it to the team though. Is there a fix in the works?

Thanks for confirming. I'll add the additional information from you and update the impact, but I do not have a pulse on any fix at this time.

Here is some information on how we define bugs and how we tackle them when they occur.

Hey community! We're seeing the same issue. In addition to the fuzziness issue, which I've noticed but haven't been bothered enough to report, I now have a corollary issue that's driving me crazy.

Here’s the use case: We need our SL output to be advanced by a PowerPoint-type clicker. Our only known solution to this, (and the solution we're well into dev on), is to put each new piece of text on its own slide. So, imagine this page in SL (or PPT):

Title (persists throughout, not animated)

Subtitle (persists throughout, not animated)

Normally, this would all fit on one slide: 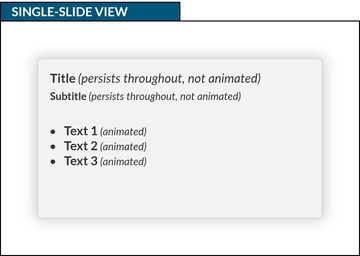 Because we need text to be revealed in sequence and we’re using a clicker, we have to put each revealed (animated) line of text on its own page. 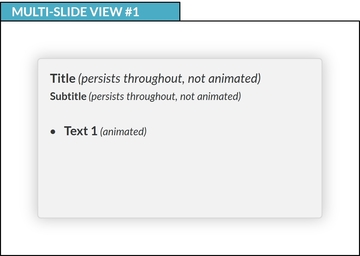 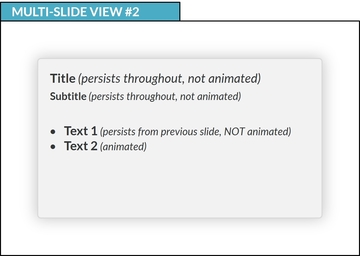 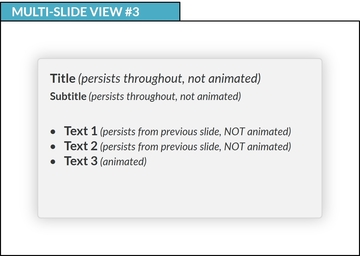 No problem – except, on the jump between slides, the text that was previously animated but is now static ‘snaps’ into a static position, moving slightly, but obviously. This issue is directly related to the issue above, I believe. I have tried to publish without Modern text, just to make sure this wasn’t the issue. Not only does the issue persist without modern text, but the text itself becomes unreadable - so this isn't the solution we're looking for.

Now, here’s the corollary. Instead of bullets as shown above, we’re using icons next to each line of text. Unfortunately, the same thing happens. Just like the text, the icons look fuzzy when animated in and then appear to ‘snap’ into focus when the next slide is shown. In other words, the images and text that were animated on the prior slide, look fine on the next slide when no animation has been attached to them, but the next line that is animated looks fuzzy, and so on.

Here is an Articulate Review output to demonstrate what I'm talking about. The web publish behaves exactly the same way.

I have a file removed of all branding that I can share with your tech team, but would prefer not to post here. Before I open a ticket, do you have any suggestions?

What about if you put the Text 1 to Text 3 on the same slide, but in separate text boxes and then stagger/space them out on the timeline.

Use the clicker to advance along the timeline, stopping after each line of text is shown.

You won't get a nice faded appearance from each line of text, but it will appear on screen individually with the clicker...

Rob, that's a brilliant idea, and, honestly, one I had not thought of. I only recently became aware of the new timeline trigger, (I think it came out in the March-ish) release. Unfortunately, we've already designed a ton of these, so I'll have to debate the merits of a redesign. But thanks for the great suggestion. That would certainly solve the problem, in principle.

I actually mocked this up and couldn't figure out a way to distinguish the click command without adding variables, So, in other words, First, I placed everything 1s apart and put a .50s fade on all items. 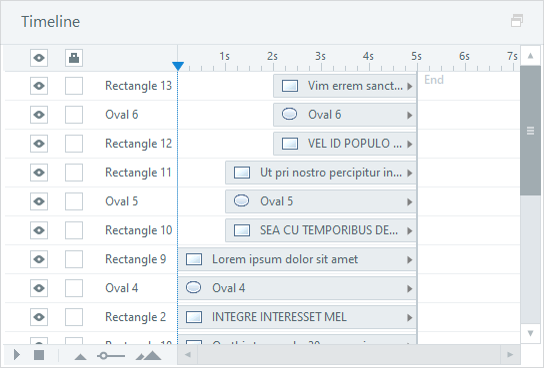 Then, I setup variables so that the first 'jump to time' is triggered by the clicker (Page Down) in this case, and the second and third and so on. I also added triggers to pause the timeline appropriately so the text boxes don't appear automatically when the timeline advances. 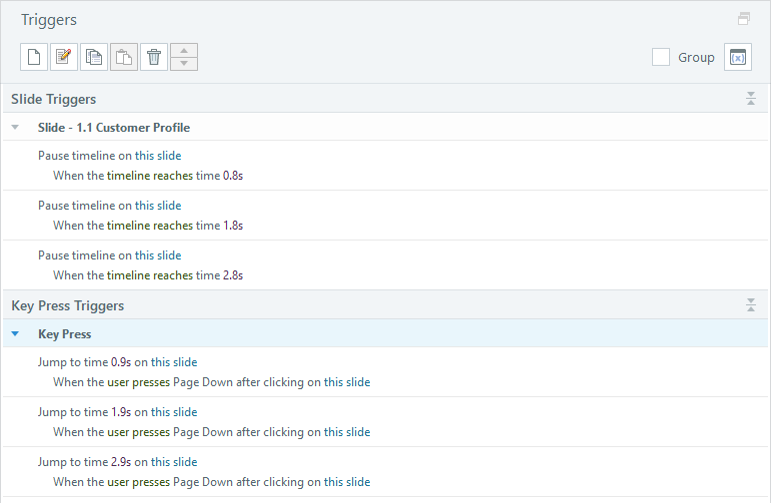 I was also trying to capture the animations, so I tried pausing in 1 second intervals, hoping that the .50s fade would come in, which does not. I then tried pausing the timeline at .9, so that it's not 'unpausing' just as an animation starts - if that's a thing, and still no animation on the 2nd and third boxes. finally, I tried, still with everything spaced 1s apart, to pause at .8, have the clicker jump to .9 and give it .1 second before the animation would play because of the way the objects are arranged on the timeline. No luck.

Also, animations aside, without toggling variables, I'm not sure how to avoid Storyline just running through the list of triggers and executing the last one on click. I would then also need a way to advance to the next page as I'm doing now. Any thoughts without triggers? I'm a trigger fanatic, but I also want to keep this as simple as possible because we'll be building several hundred of these courses.

Hi everyone - I was looking for a way to reveal successive paragraphs of text on a click by the user and stumbled on this. I have also noticed the fuzzy animated text. Has there been any progress on fixing this bug?

Thanks for checking in on this bug! We haven't released a fix for this bug where the text is fuzzy when adding animation to a paragraph. We are currently prioritizing other bug fixes, but we'll keep you updated when this makes it on the roadmap!

Been having the same problem and the "fix" that Leslie suggested for removing animation is not possible for stakeholders who want the effect.