Change State Of object1 to Normal when Variable Changes NextLayer If NextLayer is greater than or equal to 1.00 (etc.)

Show layer 1 when NextLayer changes If NextLayer is equal to 4.00

I have been running into the issue that the previous button then needs to be clicked multiple times to actually hide the layers. Since the amount of objects appearing varies per layer, I can't simply subtract 2.00 or 3.00 when clicking the previous button.

Does anybody have a sleek way of making the layers disappear within one click?

(Nevermind the layout of the attachment, it got messed up during copy+pasting into a new .story)

You need to click many times before you can get the next Layer to display, it is because you added a value of 1 and subtract 1 on Prev | Next button.

Then on the condition below, 2 clicks empty and nothing will happen.

The simplest way of doing this is by adding a button on every layer instead of using variables on the Next | Prev button.

You can disable the Next button by default until all layers are visited.

Let me know if you still need help. 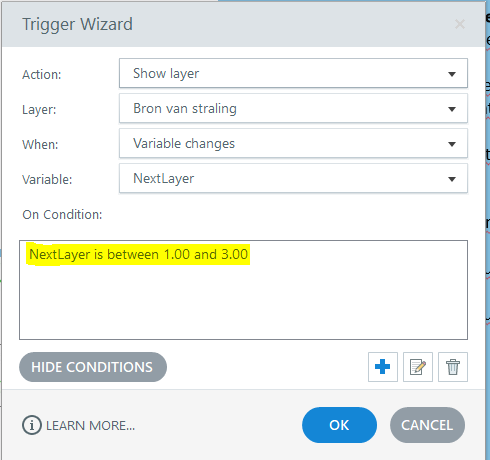 Thanks a lot for your reply. The screenshot is only half the trigger. Because on the slide itself I also used the sme variable for changing the states of two texts/objects, so it is not an empty click going forward.

Only when I go backwards I run into exactly this issue of empty clicks and I am aware of why it happens, I was just checking whether somebody might see a better way of building the slide triggers and variables to prevent the empty backward clicks.

I do not want to disable the prev | next buttons since this is the standard layout for the project. I don't like to introduce a new way of navigating halfway through the project while the user does not see that this is layers instead of slides he/she is forwarding. The standard navigation makes my life a lot easier for most of the slides.

Is it an option for you to take everything off the layers and create separate slides instead?

This would remove any funny business with triggers and variables and let you navigate back and forth through the various stages with ease.

I have fixed the navigation for Prev Button by adding a LayerCtr variable.

While LayerCtr>0
Loop this Trigger.


The Next navigation triggers need to check as there are conflict triggers.

Hi David,
I don't like using too many slides that I then need to hide from the menu on the left hand side. But yes, that would have definitely been the easiest option.

Hi Daniel,
your solution is exactly what I was looking for, thanks a lot for your help! I can easily fix the conflicting triggers.
Great job!