I saw Mike Amelang’s inventive solution to create a Learning Journal in Rise, and it inspired me to post something similar!

Recently our team built an observational checklist in Rise, only to discover that Rise doesn’t save the value of checkbox lists between sessions! ☹️ I’ve seen other people on these forums disappointed by this as well, so I thought I would share our hotfix solution. This will make it so that your Rise course will keep checkboxes ticked/unticked between sessions.

How to use it:

Blocks in Rise are loaded procedurally as the user scrolls, and each lesson is effectively a separate webpage which animates in and out as the user navigates.

This immediately throws up obstacles for identifying when and where certain blocks are used in a course because they will rarely be displayed ‘all at once’. As a result, using JavaScript to find and keep track of all the checkboxes in a course isn’t as simple as just accessing the DOM to count each checkbox element on the page. Instead, the script keeps track of each checkbox as it loads in and out of existence (as well as their respective states, and respective lesson associations).

When a user accesses a lesson in Rise, the lesson ID will be appended at the end of the page URL:

By using JavaScript, each checkbox on the page is associated with its respective lesson ID by appending it as an additional attribute:

When the user jumps to another lesson, the lesson ID in the URL changes with it. This is when the script counts the checkboxes again, but this time excludes the checkboxes with the old lesson ID. It then assigns the new lesson ID to the new checkboxes loading onto the page.

At the same time, these lessons IDs and checkboxes get saved into a variable (called checkboxMap), where the lesson ID is used as a property, and the corresponding checkboxes are saved into its value as an array.

Every time the user navigates, the script cross-checks this variable with the lesson ID from the URL to determine whether or not the lesson had already been visited. If the lesson ID is not found in the variable, it will be added as a parameter and will continue to track the checkbox states as normal. However, if the lesson ID is found, it will reference the values in the array next to it and mark each of the boxes and checked/unchecked.

Appending this information to the suspend data

The checkbox data needs to be converted into a simpler format so that it could be transmitted and stored by the LMS. The JSON.stringify() method does this automatically by converting object variables into text strings. After converting the checkboxMap variable into a string, it gets appended onto the end of Rise’s suspend data:

These two chunks of data also get separated immediately upon resuming a course. Otherwise, Rise would attempt to parse the checkbox information (which it doesn’t understand) and corrupt the session. This is done using the split() method with the separator keyword:

After separating the checkbox data, it gets converted back into the checkboxMap variable using the JSON.parse() method. The script then continues to operate as normal – counting checkboxes in each lesson and applying the checked/unchecked states to them.

Let me know if you have any questions or suggestions to improve the script! 😊 I know this method is not ideal for most people, so it would be great if Articulate implements this as an official feature at some point.

Hi Ben, thanks so much for this! I am trying to follow these steps, but I do not see the following line of code in SCORMContent folder.

Any help would be appreciated! Thank you!

Actually, I was able to find the line of code. I've uploaded the SCORM zip file to my LMS with no issues, and after launching the course, the checkmarks are saved as I navigate from lesson to lesson; however, when I exit the course and relaunch it, my progress is not saved/bookmarked. Is this an issue with the LMS or am I missing something with the javascript edits? Thank you!

Thanks for testing this out! I completely forgot to mention that the checkbox.js file contains a line which redirects the user back to the main menu when they resume the course.

The reason for this is because the checklists ONLY get applied when the page URL changes... So I redirect learners to the starting page so that they are forced to click on a link.

The learner's progress is still saved though - they just have to click the continue button on the starting page to resume where they left off. I know this is a hacky solution, so I'll absolutely look into fixing this when I have the time.

If bookmarking is absolutely crucial, you should be able to remove the highlighted code above - just keep in mind that if the current lesson contains a checklist, it will appear unchecked until they navigate to another lesson.

Sorry for the oversight! Hope this clarifies things a bit better.

Thanks so much for your response Ben! I am actually finding that the
progress is not saved and when clicking on the Get Started button from the
starting page of the course it is showing 0% complete.

Would love to see a solution that keeps the checkboxes selected and saves
the learner's progress in the course, so I will continue to follow this
post.

Thanks again for your help!

Oh in that case I'm a little stumped! It doesn't sound like an LMS issue since it seems to be saving checkbox data, but I may have missed a step...

Just double check that your index.html changes look something like this: 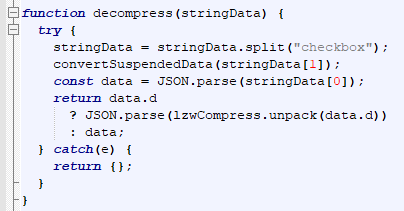 stringData[0] contains the progress data, and stringData[1] represents the checkbox data. So if there's an issue with progress, then it's probably due to stringData[0]...

Thanks so much for all your help Ben - It is working now!

I was missing the following line of code:

I looked over my instructions and realised that I completely left that step out - so that was my mistake! I've updated the original post so it should include everything now.

Just wanted to say a big thanks for this Ben, just used it for a compliance course I have put together - and it works perfectly.

This is fantastic! I'm looking forward to trying it out.

I assume that we would need to redo the code tweaks each time the course is updated? It's a small price to pay for this functionality though!

This is good stuff Ben—well done!

This script does not seem to be working for me at all. I have tried it a few times and my RISE module - which has a lot of checkboxes in it - still won't save the tick boxes when I leave and go back in.

Is there any chance of working through this issue with you or someone else?

Would love to see this become a native feature in Rise.

My teammate and I were thrilled to find this code, thank you so much for sharing it!

We are currently running into an issue where the final checkbox that was checked will not save if the learner doesn't advance to the next lesson. It doesn't matter how many or few boxes are selected or the location within the list, the final checkbox will always appear blank when the course relaunches.

I'd love to know if you've seen this happen before or have any advice on a solution. I'm a newbie with code so this is uncharted waters.

Hi Ben, this is absolutely fantastic!

Thank you for sharing, works perfectly!!

Hello Ben. Thank you so much for sharing this - this has been a great time saver as I thought I was going to have to re-do my course in storyline to make our 90 day onboarding checklists work properly.

I,m also finding similar bug,  I am getting checkboxes to save, though have issues within a lesson if not all checkboxes are ticked before the user exits.    I think I've seen it sometimes save checkboxes, and other times not save them.   Something Im sure related to what you've mentioned in response to Jennifer above.

Really appreciate your expertise in making this!

This is exactly what I am looking for, however I am not so great on computers and steps 1-5 are slightly confusing to me. Can anyone help? How do I unzip a scorm file?

Hi Emily! Curious if you all every determined why the last checkbox selected wasn't saving? I'm running into the same thing with my course, and was wondering if you all every found a solution, and if so, if you'd be open to sharing? Thanks so much!

Hi Ben, is there a way to add this code into a Rise course that has been exported as a web page?

Hi Ben, thanks so much for this solution! Would love to know if there is a way to 'clear' all the checks. I'm looking to use my check boxes as a process they can repeat so would also need to be able to clear them.

Thanks again - love seeing people coming up with great workarounds.

Beautiful - this is exactly what I needed - thanks for sharing!!!