Set Trigger to a Layer on another Slide

First, Thank you for Storyline!! 8 hours testing and i have already ordered my copy

Secondly, I have set a Triggers to specific Layers on the same Slide so far so good.

Now i need to set a Trigger so that you jump to a specific layer on a second Slide.

Any idea hoe to do that?

It is not possible to fire a layer on another slide using a trigger.  You can trigger a variable e.g a true false variable.  The on the slide you want the layer to be open set a slide level trigger to show the layer if the variable = true

My general rule is to use states to track within slides and variable if you need to move to another slide.

Thanks for the verry quck response

I don´t really understand what you mean, but i will give it a try.

Variables, on the other hand, are global. When you set a variable value, you can retrieve that value anywhere in your story, including master slides.

This provides a neat mechanic you can leverage to "broadcast" a change. I call triggers that use this mechanic "listeners". You can setup a trigger to watch for a change in variable or to look at a variable value when another event is triggered like the beginning of a timeline.

Every time this slide is shown this trigger will look at the variable value. If the variable is true, it'll show the layer. If it's not, it won't.

This community and all the experts out there are fantastic. This is what i call Support.

Is there any requirments that each variable can only be used once?

In my case i have 3 slides and 6 links on each slide that are link to various layers on the 3 slides......

Do i have to create 18 different vaiables.

The reason i ask is that it seems that when i set the True state the some of the other links will link to the same layer fom different buttons.

You can use a variable as much as you want. You can use different variable to show different layers.  Map it out ojn paper and see if you can reuse the variables based on what you want to do. you may only need 3 or 4

For example, if you use a True/False variable think of it as an On/Off switch. If its default is set to False and button trigger sets it to True, then that variable is now always True until it gets triggered again.

Some things to consider:

- If you're wanting to do multiple things on one slide, its best to have a separate variable.

For courses that have hundreds of variables, a best practice I've adopted a naming convention to coincide with the slide. i.e. Slide 1 = s1variableName,

- You can reuse a variable over an over. Just remember to reset it. i.e. After its use on Slide 1, set a Slide Trigger on Slide 2: Adjust Variable > Variable (one previously used) > To its default value > When Timeline Starts. So if you used a True/False on Slide 1 and it was triggered to True, on Slide 2 you would reset it to False as the Timeline Started.

Hi all, and thanks for all help.

I think Kevin came up with the hint i needed. That is to Reset it back to False. It seems logic, considering the behavior that i see.

Since it is Friday evening here now i will test this on Monday and let you know. Could be good for other users to know how it worked out.

Have a nice weekend,

Glad to be of help, Mats. Enjoy the weekend!

I added a Slide Trigger that set the variable back to False when the Timeline starts.

Thanks for all help.

Does anybody know how to reset a layer after being showed? this is what im trying to achieve. I have a button and that  unhunde a layer that contains an animation, but what i need to do is to replay that layer animation everytime i click that button, but so far everytime i click the button the layer gets unhidden but the header is at the last frame. i dont know how to reset the header so the layer always starts from frame 1.

Never mind i think i found it in the layer properties, reset to initial state!

Set the revisiting property for the layer to "Reset to initial state" when revisiting.  To set this, in the Slide Layers panel, click the cog for the layer.  Then you can set this.

TX for Q/A which are helping me as I get a better handle on triggers and variables. Mats, Phil and Steve are so generous with their help in this community (as are Gerry, Kevin, and so many others) I thought I'd share with you this really good book written by Phil, Steve, and Russell Stills: Storyline for Starters

Oh, and no, I don't have any "stock in the company"...just like good resources.

You guys seem to understand variables and slide triggers really good.  Hope you can help me.

I'm need help setting Slide Triggers on a Final Results Slide.  In this project, there is a lot of branching so I created results slides within the project - seven in total. The way the student answers the questions triggers a certain layer to appear on Final Results Slide, well, in theory.

Please click on my name to reveal more information on the issue if you think you can help.

I too, am trying to use variables to show a layer from a previous slide. The premise is the user has not selected the best scenario choice and they need to be taken back to the slide with the choices so they can pick again. I set up a variable and thought I set it properly to achieve what I described but nothing happens...please help! 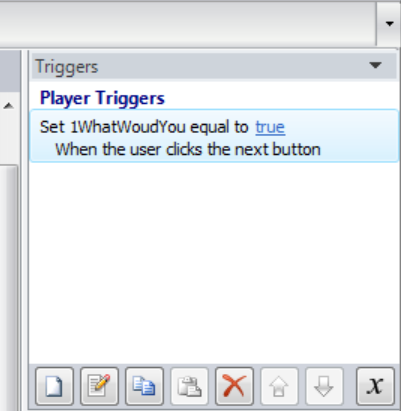 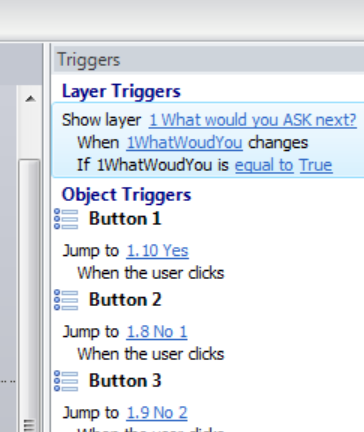 Hi Marie! Looks like Phil and Mike are taking care of you over here. Just want others in the community to be able to follow along.  Thanks!

I am working on an interactive report project:

I wanted to link a slide to a layer, I used the variables and triggers but there is still a problem:

Slide 1 gives the user the choice to enter via 2 buttons that jump to the slide 20.

Slide 20 gives the user the choice to go to other slides via multiple buttons.

That is why I used variables and triggers and it worked at first.

The first variable I used was: theuserenterviabutton1 and I put a trigger on Button 1 : set theuserentersviabutton1 to true when the user clicks and I did the same with a second variable for Button2. I put a second trigger to jump on slide 20 when the buttons are clicked.

I created two other variables: one to showtheslide and the other showthelayer. I used again triggers:

On each slide linked to slide 20:

- slide trigger: show layer 1 when timeline starts IF showthelayer is equal to true

But the problem is that the user may get back on slide 1 several times and choose again between the two buttons.

I even tried to change the settings of the slide so that it  reset to initial state when the timeline starts but it does not work.

Do you have any ideas on how I can solve this problem?

Hi Mareena and welcome to Heroes!

When working with triggers and variables I'd first check into the order in which these triggers are firing within the trigger panel as they'll work from top to bottom. Also, is the variable being reset somewhere else and therefore not working on the revisit? If you'd like the buttons on slide one to only work one time, have you looked at using the disabled state of the buttons and then setting the slide to "resume saved state"?

If you're still not able to get the desired behavior, could you share that file here or a sample with the same set up so that we could take a look at what's happening?

Hi Ashley, thanks for your answer!

I checked the order of the triggers, they are all on top.

Actually I don't want the user to click only once on the button since the slide 1 would be like the "home page" of the whole project where the user could go back to choose which category he would like to read. I am not sure if I am clear but the idea is that the user would have the choice to go back on the home page whenever he wants and for the slides that I am talking about I need them to do the same process everytime the user click on the buttons.

I can show parts of the project:

The triggers on the first slide are on the two buttons (named competitors and geographical area) : 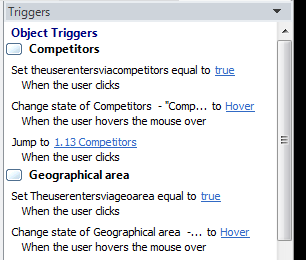 Then the triggers on slide "13 Competitors" (slide that I called 20 before): 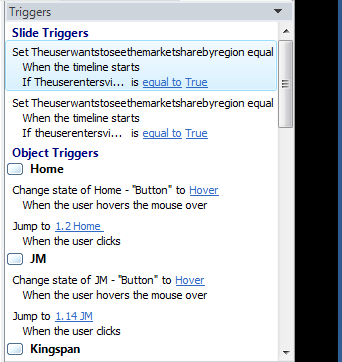 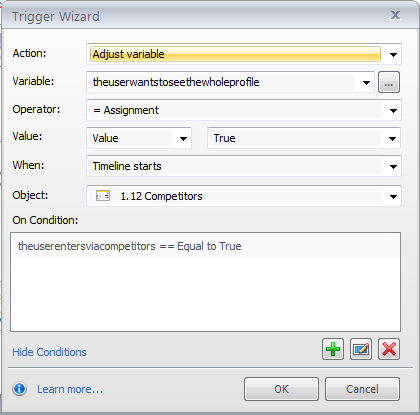 and here is the layer that I want to make appear when button "geographical area" is clicked:

I hope my explanation is clear and do not confuse you

Thanks again for the help

Thanks for the images - although I'm still having a difficult time following the variables and what you are seeing vs. what you'd like to see. The third image is throwing me off - as I don't see where that variable plays into showing the layer? Also, slide 13 isn't the "home" slide, correct?

Hi. I found this thread and just wanted to say thanks! This is just what I needed (especially Kevin's instructions above). Love working with variables.

Glad my instructions made sense, Adena.