I ran into an issue with a SL360 module that was published at the end of August last year. When it was initially published, both the Flash and HTML5 output worked as expected. However, recently I was made aware of an issue that was occurring in only the Flash output.

Sliders were used on two slides. When using the slider, the slider would blink and on some of the stops the content that should be displayed wasn't appearing at all. After the slider reached the end position, the module would become unresponsive and no further clicks would be registered.

As I mentioned, this only occurs in the Flash output. The HTML5 output works fine.

This issue didn't occur when the module was first published and has only been noticed recently due to complaints from people who'd be faced with an unresponsive module.

Republishing the module using the latest version of SL360 fixed the issue, however I'm now concerned that this may have impacted other things that were built at a similar time.

Does anyone know what could be causing this? Was there an update to SL360 that addressed this? It would be great to understand what caused this issue.

Hey, Matt.  Our last update for Storyline 2 was released in May 2017 when we addressed a Google Chrome issue.  Do you think you might have created your content on an earlier build in August?

If you have some content that you haven't yet updated from that timeframe, we can see what build of Storyline 2 you were using at the time.  I use Google Chrome's developer tools to view the source code, which will include the build used. 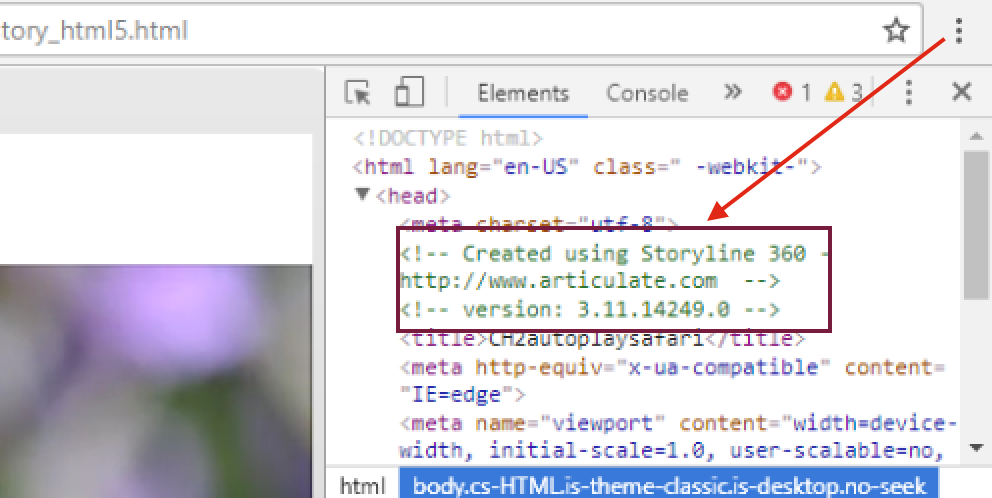 Depending on the build, maybe we can identify what potential issues have been fixed since then.  Also, do you know if a common browser was being used among people experiencing the freeze?

Thanks for checking that build number! I don't see anything in our bug reports or the version history that would match this, so I'm a little stumped. I am happy it's working again though...

Yeah I just went through the release notes as well. Anyway, it's fixed now, was just concerned that something that once worked no longer did... as this isn't something I've had happen with SL content very often.

Thanks for looking into it.

Absolutely understand that! Let us know if you spot something similar again, and if you can share a link to the output that'll help us take a look!