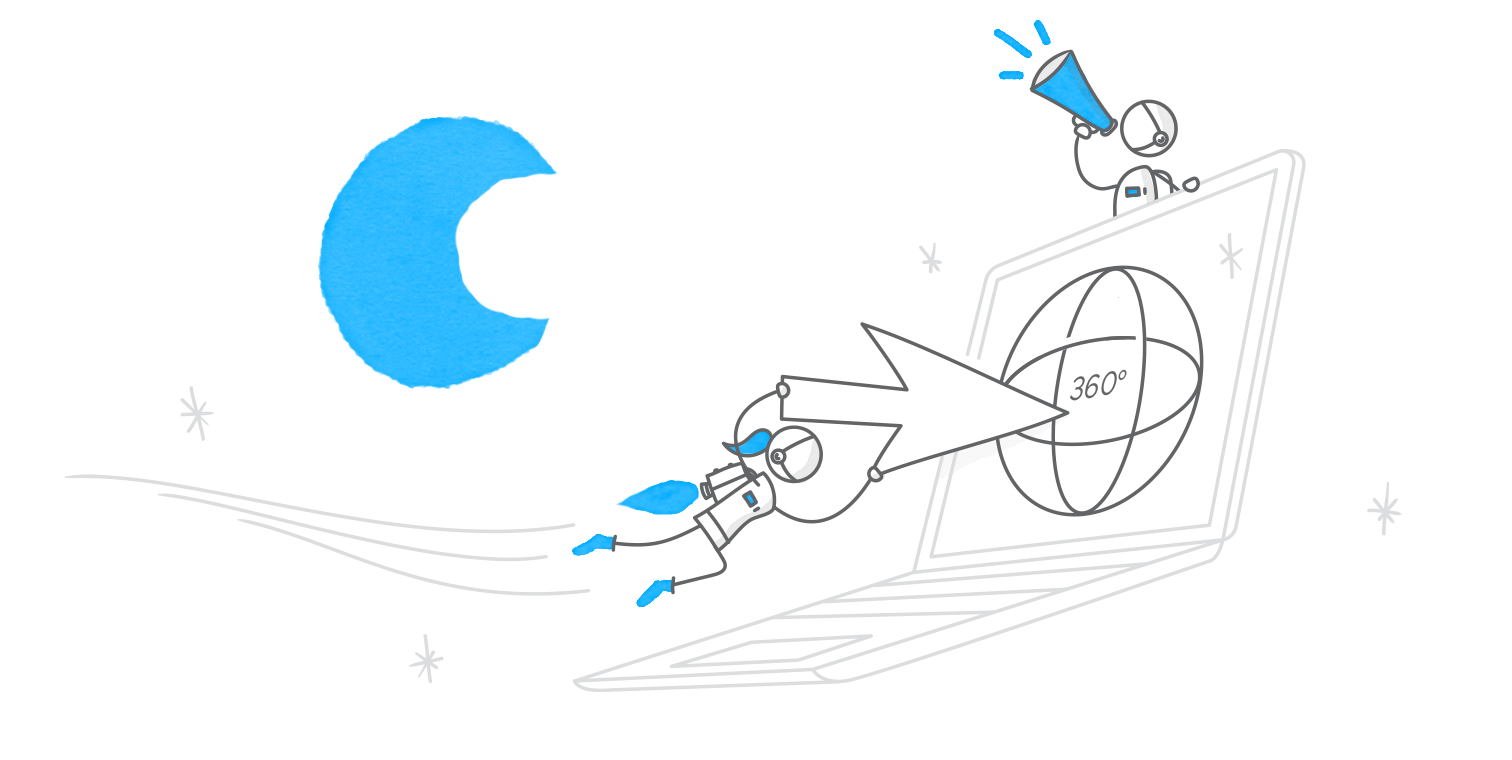 If you’re like many course authors, you’re constantly looking for ways to make your e-learning more immersive. And while there’s no one-size-fits-all solution, your focus should always be on creating learning experiences that entice learners to mentally and emotionally engage with the content. One way to do that is with 360° images—sometimes referred to as panoramas or photospheres. Working with interactive 360° images in Storyline 360 gives you endless opportunities to create immersive learning experiences that let learners explore a realistic environment, like in this demo.

If you’re intrigued by all the creative possibilities of working with 360° images in Storyline 360 and want to learn effective ways to use them, you’re in the right place! In this article, I’ll walk you through 7 pro tips for creating 360° image interactions that capture learners’ attention as efficiently as possible.

When I start any new e-learning project, I like to spend a few minutes customizing the course settings to save time in the long run. This is a good general practice, especially if you plan on adding interactive elements like 360° images to your project. That way, if you need to change your colors or fonts later on, you won’t have to worry about manually editing each object.

I always start by creating theme colors and theme fonts to ensure that the navigational elements I add to my 360° images—such as hotspots and markers—will maintain the design scheme I’m using for the rest of my project. Then, if I need to make changes, all I have to do is edit the project’s theme colors and fonts and all markers and hotspots will update automatically.

2. Use images that capture every angle

Adding 360° images to Storyline 360 is super easy. The key to building a really cool and immersive experience is to focus on making a really great image. The good news is you don’t need any specialized equipment to create a 360° image. Some phones, such as the Pixel, have a built-in feature that allows you to capture your own 360° images. But not all phones have this feature or are built the same.

For example, an Apple device’s camera with panoramic mode enabled captures 240° cylindrical panoramas. And although you can still add 240° images into Storyline 360, the way they render isn’t as immersive as the experience you’ll get when using a 360° image. (You can see an example of a 240° image here.) If your phone doesn’t include a built-in feature that allows you to take 360° equirectangular images, no need to worry. There are a growing number of 360° camera apps you can download to create your own.

Either way, for the best learning experience you’ll want to use images that give a full 360° field of view. If you’re unsure where to find or how to create 360° images for your e-learning projects, check out these ideas to get started. You can also dig into this article to learn more about supported 360° image formats in Storyline 360.

3. Set the initial view to create a realistic scene

They say first impressions are everything, and it’s especially true when you’re working with 360° images. Thankfully, Storyline 360 makes it super easy to adjust the initial view so learners see something inviting and relevant right from the start.

For example, if you were creating an office tour for your new-hire onboarding course, you wouldn’t want the camera facing the ground when the learner first launches the interaction. Instead, you’d want them to be able to look straight into the office. To do that, simply open the 360° image editor, navigate to the Interaction tab, click Edit, and move the image to your preferred angle.

4. Choose how learners will navigate

As you design the 360° learning experience you’d like to create, consider how you want learners to move through content. Do you want them to be guided around the space or invited to explore freely? With 360° images, it’s up to you. You can choose between free navigation and guided tour options to help learners make the most of the interaction.

As an example, let’s say you want to give your new employees a way to tour the office before their first day. Using free navigation, learners can explore interactive objects in any order and familiarize themselves with the surroundings.

Now let’s say you want to guide the learner through the office from room to room so they know what to do and where to go on their first day. In that case, you might want to use the guided tour option so you can take learners through the space in a specific order.

With a high-quality 360° image in your project and a vision for how you want learners to experience it, you’re now ready to add some navigational “nudges” learners will need to immerse themselves and start interacting with the content. Those navigational elements take the form of markers and hotspots in Storyline 360.

You can use markers to reveal text, insert images, import audio, or add video content. You can even customize markers by changing their icon, color, and placement.

Using our office example, let’s say you want to add a welcome video to the 360° interactive experience. Simply add the video to a marker and learners will see this content when they click on it.

If you’ve added a video, you can personalize the video play button color within a marker by going into the player settings and choosing an accent color.

Another great option to test learners’ knowledge or to help them learn more about their surroundings is to create hotspots. With hotspots, you can either give learners a hint that part of the screen is clickable or hide them so learners discover additional content on their own. You can draw hotspots anywhere on the slide and in any shape and color.

You might be wondering: what if I want to add a knowledge check to my 360° image? Storyline 360 has you covered. One way to accomplish this is to just add a trigger to any marker or hotspot. With triggers, you have several options—such as Show Layer, Lightbox Slide, and Adjust Variable. 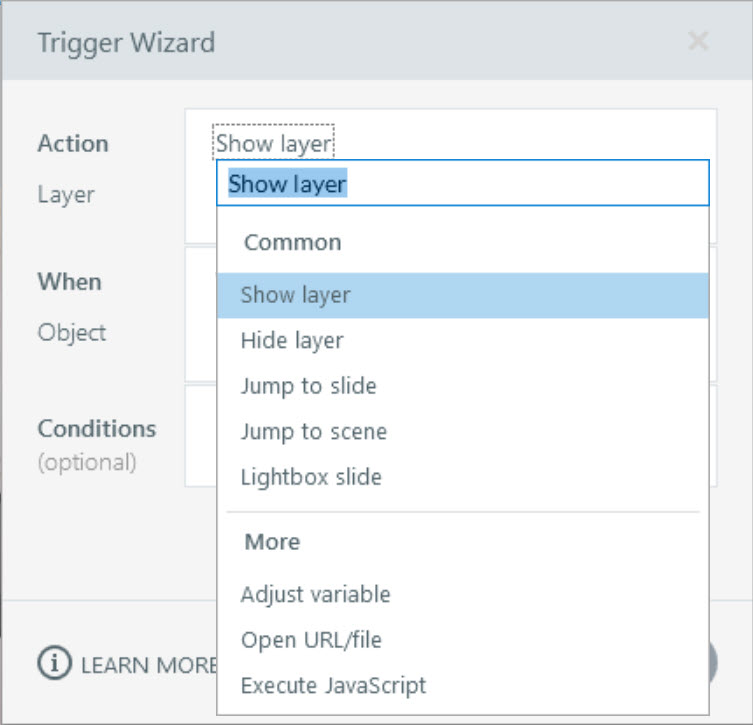 By simply creating a trigger, you can easily open a layer with an ungraded knowledge check or display a graded quiz slide in a lightbox.

And you’re not limited to just knowledge checks. If you wanted to add a checklist to your office tour to ensure learners complete their onboarding tasks, you could add a button that opens a layer where you’ve created a checklist, as shown in the .GIF below.

7. Personalize the interaction with variables

One of the great things about custom e-learning built in Storyline 360 are all the options to personalize the experience with variables. When you combine the power of variables with 360° images, there are almost infinite possibilities!

For instance, there might be times you want to show learners their progress, display a lightbox slide when a certain number of markers have been visited, or ensure learners visit all markers before moving on—just to name a few ideas. In these instances, using triggers to track variables is a good way to go. To learn more about using the built-in tracking variables in Storyline 360, check out this article.

What are you going to create with 360° images?

Adding 360° images to your Storyline 360 courses is a great way to invite learners to explore and engage with your content. And with these tips, you’ll be creating immersive 360° learning experiences like a pro.

One of the best ways to come up with new ideas for using 360° images is to look at what other e-learning pros are doing. To see some inspiring designs, check out this recent challenge on Interactive 360° Images in E-Learning. And while you’re at it, create your own 360° example to add to the mix. We love seeing your creative ideas.

For more details on using 360° images in Storyline 360, check out the following helpful articles:

What tips do you have for creating immersive learning experiences with interactive 360° images? Please share your ideas in the comments below.

Want to create your own 360° Storyline 360 project, but don’t have Articulate 360? Start a free 30-day trial, and come back to E-Learning Heroes regularly for more helpful advice on everything related to e-learning.

I had a great time exploring this new functionality. I grabbed a panoramic image of the Milky Way (https://www.eso.org/public/images/eso0932a/) for the image and used the Articulate Content Library for videos of each of the planets. Can't wait to do more with this! https://360.articulate.com/review/content/1ea0ce65-c729-4756-9f34-8682b85bca43/review

This is out of this world, Karl! 😁 Nice use of 360° images and Content Library 360 videos! I really like the subtle music you added to the experience. Thanks so much for sharing!

That was beautiful! Nice work! don't stare at the sun too long - it's mesmerizing. :-)

This is really cool! The UFO was a nice surprise.